Since the beginning of 90s and up till now our team has been carrying out archaeological diggings in Stalingrad battlefields. During this time a lot of German, Romanian, Hungarian and Soviet war relics have been found. The details are in this article.

Moral side of the question

Right away I want to answer several popular questions. We do not dig in the places of military burials, although there are enough of them on the territory of Volgograd region. But if we find human remains, our search organization reports this to a specialized service in our region. And then they take actions to lift and rebury them at the memorial cemetery in the village of Rossoshka. By the way, found personal identification badges (dogtags) are also transferred for identification. Have you seen many dogtags for sale in our shop? No!? But this is one of the most common findings in Stalingrad and you will understand it from this article! Consequently, people who call us in the social networks ruiners of graves, are still not right... 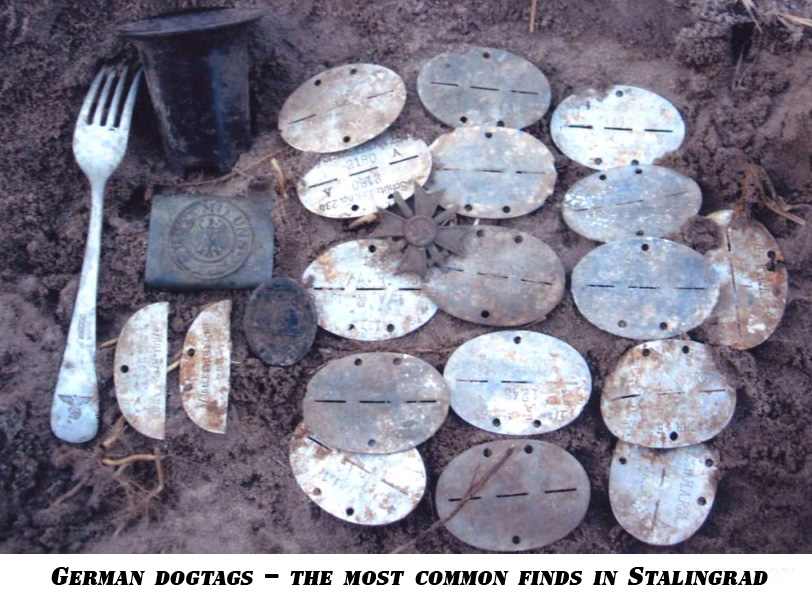 Would you like to join us at the diggings? It is possible!

If you have dreamed of touching the history of World War II, then welcome to Stalingrad (now the city is called Volgograd)! In the place where the bloodiest battle in history of wars took place, you can find relics that have already been in the ground for 75 years. Our team gives you such opportunity, just contact us - CONTACTS. We will fully organize your holiday. We will find a good and inexpensive accommodation for you, organize sightseeing tours around our city and, of course, you will excavate in the heart of Stalingrad Pocket. As always there can be both successful and unsuccessful days. It happened to me many times that I came to an outwardly perspective place and expected good findings but actually I could not find anything except cartridges, nails and buttons. There were opposite cases as well, when in the arroyo, which had already been dug many times, excellent findings were coming one after another.

So, where exactly do we find all those ww2 relics available for sale in our shop? As a rule, we hold archaeological digs in locations of large military units and try not to search on the battlefields. This is due to the fact that every meter of Stalingrad land is strewn with metal, and on the battlefield, there are many more fragments, shells, bullets and other unnecessary signals for the metal detector! It is more likely to find good ww2 findings in places where, for example, there were tent camps. But how to find out where, for example, German or Romanian troops deployed 75 years ago? Documents from declassified archives, communication with local residents or google maps on which caponiers and dugouts are still visible, can help. But for me everything is much easier because I have a friend who has been digging for 30 years. Thanks to his knowledge and experience now I successfully find battlefield relics in the suburbs of Volgograd, and the photo archive that he has had since 1990s, makes it clear that every year it is becoming more and more difficult to make a worthy finding, but Stalingrad land still contains a lot of ww2 discoveries.

Sometimes I am asked what the most significant artifacts we have found? Perhaps, these are German Cross in silver, Gorget of Feldgendarm and Spanish Cross. 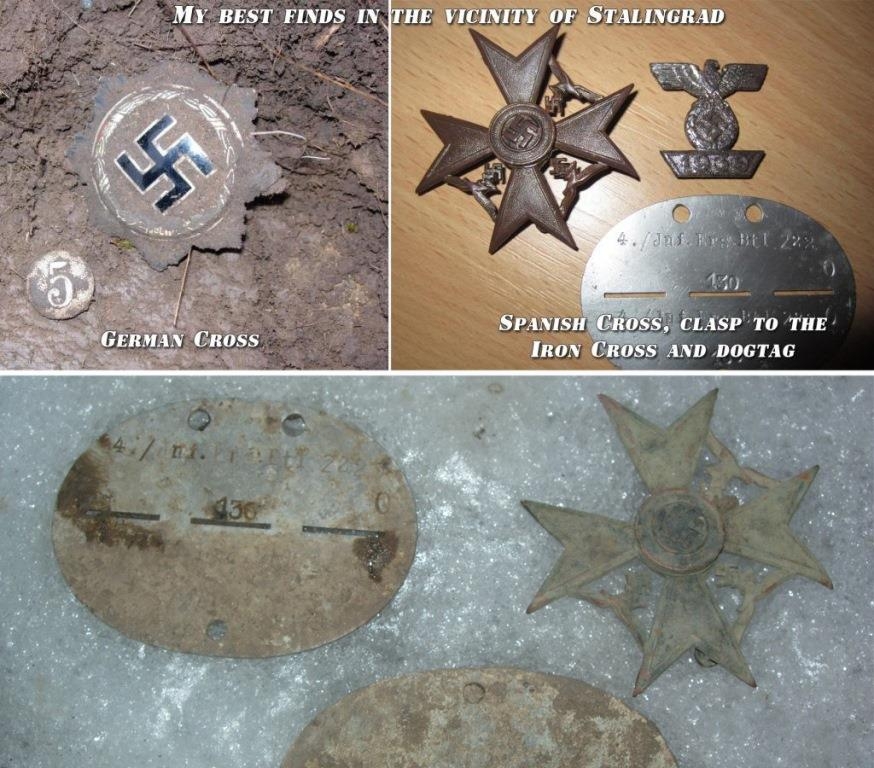 If you have noticed, the most common product in our shop is German helmets. But now it is becoming more difficult to find them, because due to its large size and, consequently, good electrical conductivity, any modern metal detector can detect a helmet at a sufficiently large depth, and there are more and more fans of instrumental searching. 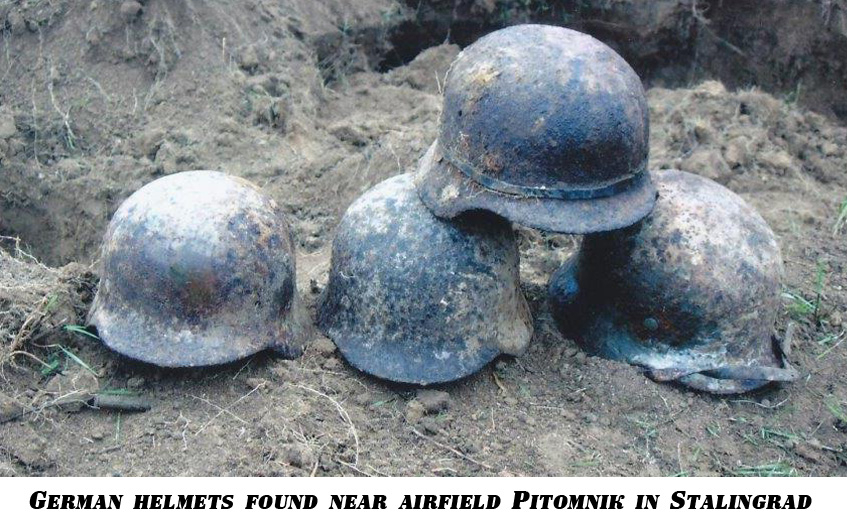 For this very reason, it is less effective to look for good signals in the upper earth layers rather than to go deeper. Sometimes dug holes are higher than a human. 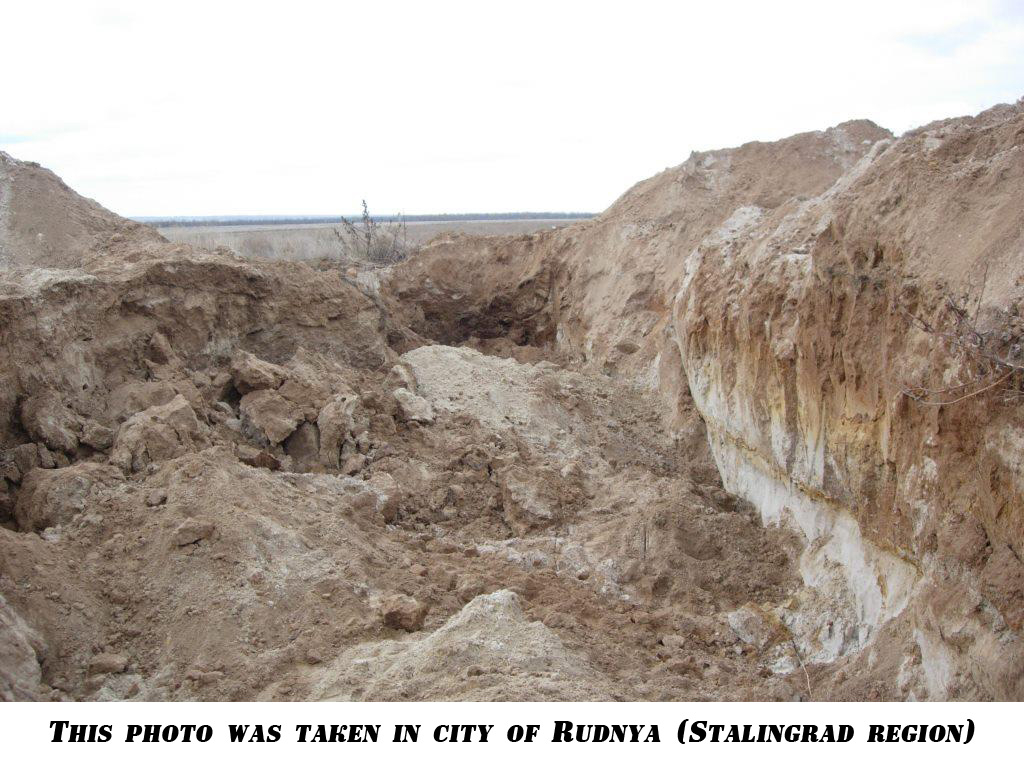 But, still, it does not mean that walking with a metal detector in the fields will not lead to any result. Surface findings are still possible. So, for example in 2017 I was walking to the arroyo near the village of Ezhovka, which is west of Volgograd and saw a German Dogtag sticking out of the ground. Or in winter of 2018 in the area of Rossoshka I found a German bayonet from Mauser 98K at the depth of only 10-15 cm.

Sometimes we are asked: what do we do if we find WW2 weapons or ammunition? We do not touch ammunition, but if it is dangerous, we inform the police. In my practice, this happened only once. As for weapons, I have never found it. This can be explained by the fact that after the end of Stalingrad Battle Soviet trophy teams collected almost all remaining weapons on the battlefields. But in 2010 my partner found a pistol Steyr Pieper M1908 and as you can see in the photo, its condition was bad.

By the way, about the condition of the relics found in our region - the soil is very aggressive and therefore all metal objects that did not have paint on their surface cannot remain in a good state and, as a rule, all of them are affected by rust. But this cannot be said about the state of objects made of non-ferrous metals, they usually have a good condition!

Maybe you are interested in what metal detectors we use and which of them we give to our guests. We use both simple devices and popular ones like Minelab X-terra 705. As for me, I use White's Treasure Master. And my partner, whose experience is more than 30 years, uses simple Tesoro Silver uMax. But believe me, these metal detectors will be enough for successful searches! 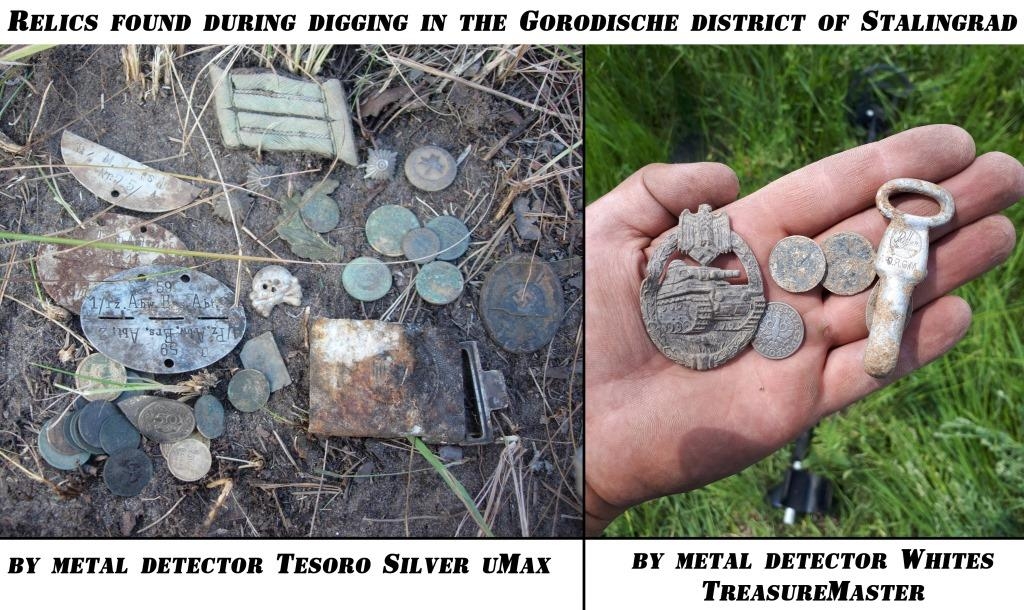 And now I want to reveal a terrible secret - sometimes, very rarely, but we find relics of Waffen-SS in Stalingrad. Yes, I know that Waffen-SS officially did not take part in the battle for the city. But there is information that in autumn of 1942 to strengthen and enhance the morale of the 6th Army soldiers, each division was enhanced with 1-2 SS soldiers. Some findings can prove this face - for example, buckle SS or Cockades skull and eagle from SS peaked cap. 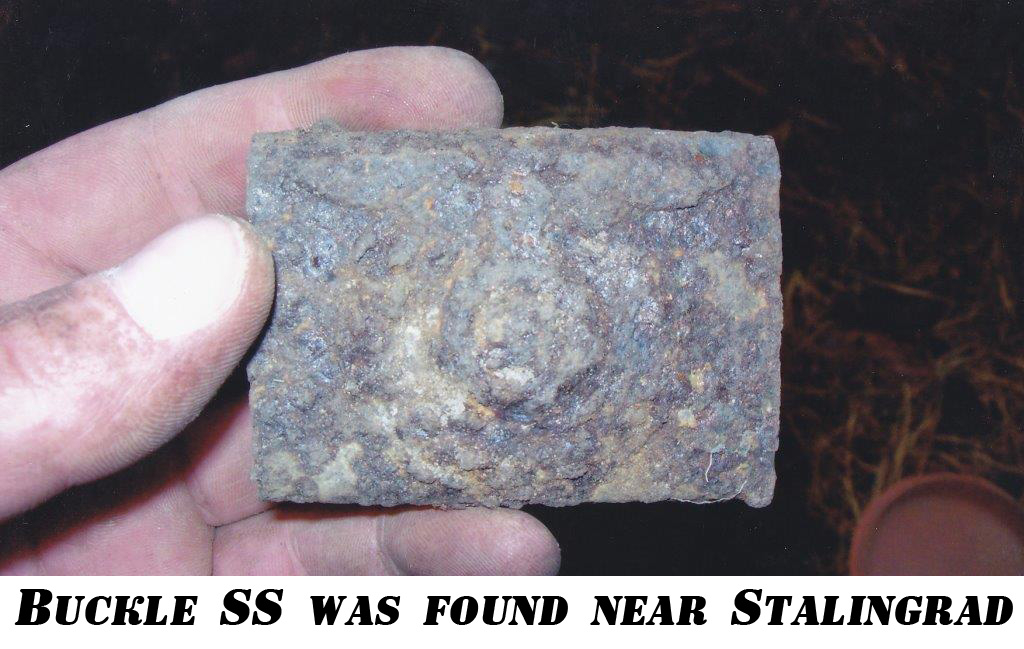 Most of the findings discovered near Volgograd belonged to German servicemen, but also quite often we find personal belongings of Romanian soldiers and rarely - Soviet and Hungarian ones. For example, in the village of Kletskaya and in the area of airfield Pitomnik we often find Romanian ww2 relics. 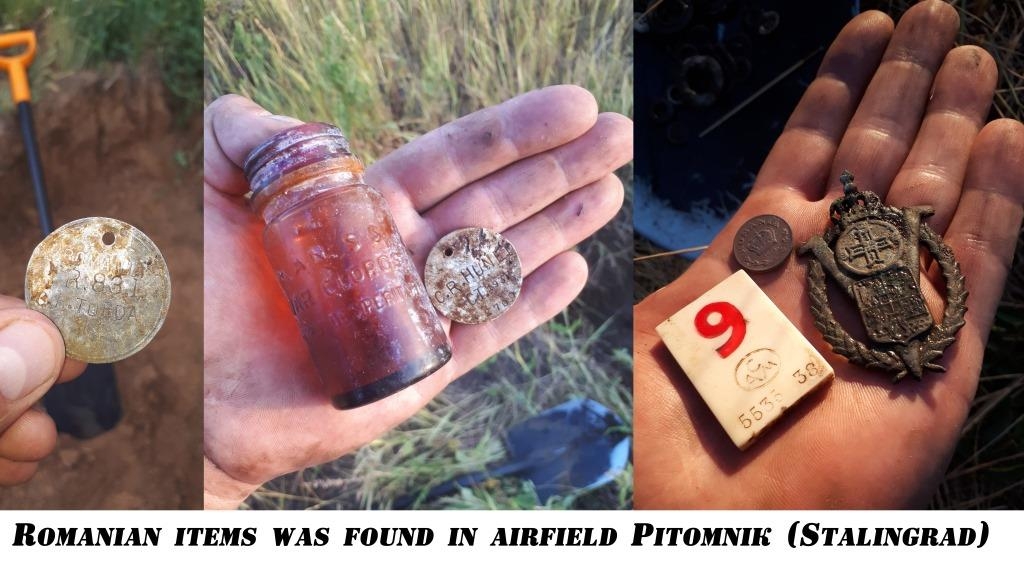 In any case, archaeological diggings are always good luck. Do you want to try your luck? If yes, then we are waiting for you!