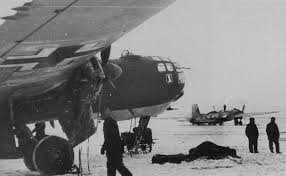 "To ensure the encircled troops of the 6th Field Army and the connections of the 4th Panzer Army with ammunition, fuel, food, medicines and other necessary supplies, the German command began to arrange the transfer of the necessary cargoes by air by air and transport aircraft and bomber aircraft.
To this end, the Germans hurriedly prepared the Tatsinskaya airfields (capacity of up to 600 Ju 5000 and Ju86 aircraft - 11 groups) and Morozovsk (capacity of up to 400 aircraft) as the main supply bases for encircled troops, and Chernyshkovsky, Kotelnikovo, Zimovniki and Salsk aerodromes as auxiliary .
Inside the encirclement ring for the reception of transport aircraft, the German command used 5 airfields (B.Rososhka, Basargino, Kennel, Gumrak, Voroponovo), which had up to 20 Bf 109 fighters raised for the transport crew meeting.
To help the "cauldron" were the best shots of the Luftwaffe - the 406th and 700th groups of transport aviation and the 3rd air group of special purpose. In addition, the 55th and 57th bomber squadrons were used to transport cargo. Later to the transfer of cargo it was decided to attract and part of the forces of the 4th, 6th and 27th bomber squadrons.
As of November 24, 1942, for the supply of the "boiler", the 4th Air Fleet had 308 transport aircraft of the Ju52 type (of which 66 were combat-ready) and 355 He11 bombers (serviceable 153).
In the period from 9 to 14 January of the 43rd for Stalingrad, 222 Ju52, 62 He111, 20 Fw200 and 30 He17 additionally arrived. By January 20, the 1st training squadron of heavy transport gliders with 64 towing aircraft and 170 cargo gliders such as DFS230 and Go242 arrived in Stalingrad. The Luftwaffe transport group also had 60 Ju86.
Thus, by mid-January, at six aerodromes located 150-300 km southwest of Stalingrad beyond the outer ring of encirclement, the German command concentrated up to 600 transport and bombing planes intended to supply the encircled group with necessary cargo and troops. "
Leaving your personal data you agree its processing. Personal data is any information that refers to you as a personal data owner (full name, date of birth, city of residence, contact phone number, e-mail address, occupation etc.) Your consent applies to the implementation of any actions by Stalingrad Front regarding your personal data, which may be requested for collecting, arranging, storing, detailing (updating, changing), processing (for example, sending letters and making calls) etc. under the existing laws. Consent to process your personal data is for an indefinite term, but may be recalled by you (all it takes is your request to Stalingrad Front). Sending Stalingrad Front your personal data you confirm that you are familiar with rights and duties in accordance with "Personal data protection".