Stalingrad airlift - the reason for Germans' defeat at Stalingrad

Why did the Third Reich lose Stalingrad battle? There were plenty of reasons for this, one of them was a complete failure of Stalingrad airlift operation. The reasons for this failure and their catastrophic consequences are presented in this article…

Perhaps, the most important and large- scale battle of the Second World War was deployed from July 17th 1942 to February 2nd 1943 on the Volga shore. According to official data, around two million people died in this battle, and according the unofficial one- this number is more than tree million people. The number of people, killed in battle, was colossal. After the defeat of the German Army in Stalingrad Hitler declared mourning in fascist Germany.

November of 1942 became a critical point in the battle for the city on the Volga. Stalingrad carried the name of Hitler’s main enemy, and was a strategic point for being captured by German Army as an industrial city producing military goods, and as the shortest access to the Caucasus, where oil for warfare was extracted. But was it exactly here, where the German command made a mistake? Why do thousands of Germans still remain in Stalingrad land, struck with frost, hunger, Soviet troops and the silliness of the 3rd Reich command authority?

Hitler, who suffered from megalomania and believed he was the greatest strategist, despite of terrible losses at Stalingrad, threw more and more forces into another storm of the city, but by November 1942 Wehrmacht, as the saying goes, was exhausted. And already on November 19th 1942 Soviet troops assumed the offensive and several days later surrounded Wehrmacht’ s 4th and 6th field army. 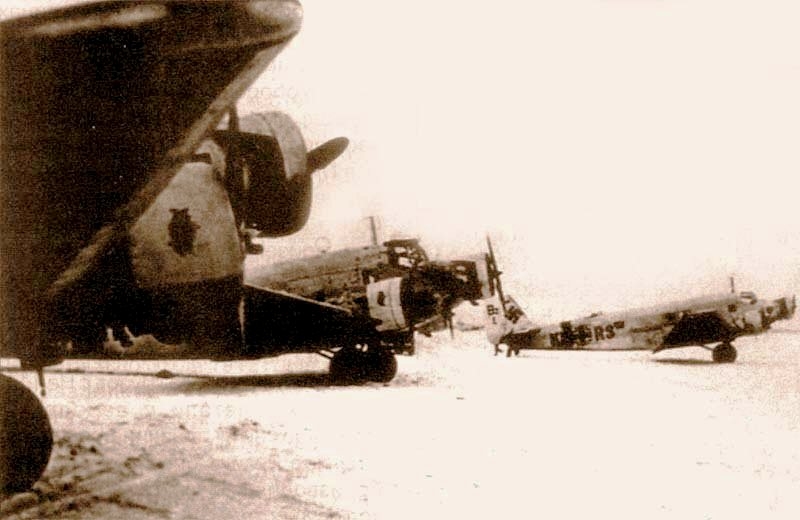 Junkers Ju 52 in Stalingrad pocket, repainted into white, are getting ready for a flight

The last supply carriages for the 6th army arrived on November 22nd to Karpovka village, located near Stalingrad. The idea of an “airlift”, which would provide a constant connection to a surrounded army, seemed promising for a German command, who had no idea about the real picture in Stalingrad Pocket.

The key to success for a German army in terms of standing its ground in Stalingrad was its continuous supply with a diversity of cargo- food, medication, ammunition, fuel, warm clothing etc. After the 6th army is surrounded, Hitler immediately issues the order to provide the 6th army with everything necessary by air.

To continue battle success a surrounded German army needed at least 500 tons of cargos a day. German transport air force command realized that this mission was impossible to complete. They stated that it was possible to deliver 300 tons a day and not for a long time. In reality the number was much less. On the average, it was 117 tons a day, and by the end of the battle it was only 60-80 tons a day.

After Hitler refused to fulfill a task, all transport and bomber units of Luftwaffe were involved. Airplanes from air war schools and even airlines, but soon they were denied due to their inefficiency. The main airfield for the Germans in Stalingrad pocket became Pitomnik. They had to deny other airfields because they were attainable for russian artillery. The very next day, namely November 23rd, after the encirclement by German forces in Stalingrad, the first provision aifcrafts arrived. Soviet troops response did not take long to wait, and already on November 25th 10 German transport aircrafts were shot down by Soviet fighters.And two day later this number was close to fifty. After that transport aircrafts with cargos tried to cover protection with fighters, but it didn’t change the situation much. 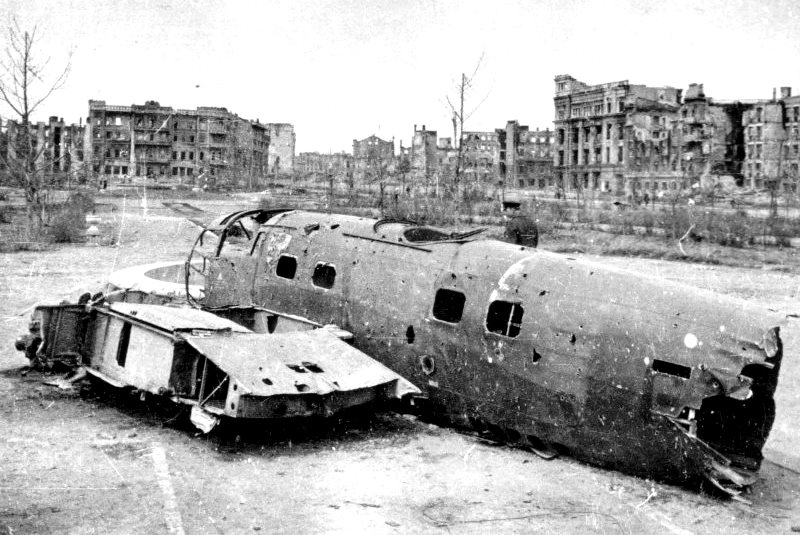 General aircrafts which were used for air delivery were Ju052, He-111 and Ju-86. Half of all aircrafts were Ju-52, which had a nickname “Auntie Ju” among soldiers. This was a bulky and clumsy three- engine aircraft. Of course, most of the aircrafts that took part in the supply operation weren’t ready for the use in such conditions. Strong frost, soviet artillery shooting and constant fog made corrections in the plan of 3rd Reich command. Human factor played its role, too. Most pilots weren’t ready to serve in such complicated conditions and see that frightful and poor situation. For example, on December 9th more than 150 aircrafts with supply were taken to the sky, but neither of them was able to deliver its cargo due to strong snowstorm. The mood among Luftwarre pilots was down. Seeing the real situation, they understood the desperation of coming tragedy. There remained about 300 000 German soldiers in the encirclement…

The silliest mistake in Stalingrad airlift operation was a moment, when women’s mink fur coats were dropped from aircrafts to soldiers in the “blood pocket”. Although, most likely they were used for the purpose intended. This case was not unique. The same way several tons of spices and full packages with awards and badges were delivered, instead of life-saving bread or ammunition. The situation developed the same way until the end and full capitulation of the 6th German army.

On January 15th 1943 airfield Pitomnik stopped functioning. A landed strip in Gumrak was used a little longer. After the Germans lost all airfields, they made an attempt to supply the 6th army with packages dropped from the air, but it failed. Quite a big part of cargos went to Soviet soldiers, because transport aircrafts now made flights only at nights and often they dropped cargos on the positions of the Red army. 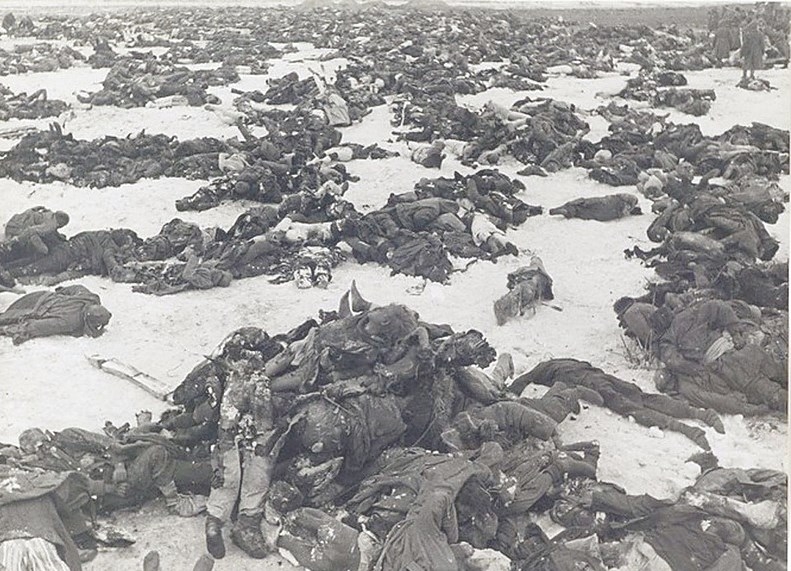 German Gering’s promise to supply every soldier with everything necessary in the pocket completely failed on January 25th, 1943, Stalingrad pocket broke down. But nevertheless, the last cargo was dropped on February 3rd over the territory of a tractor plant. As you know, the Germans didn’t need that cargo any longer. Stalingrad battle ended in complete defeat for the 6th field army on February 2nd, 1943.

Luftwarre losses in Stalingrad were more than 500 aircrafts and 1000 people from air staff. According to this data, we can conclude that not only land forces, but also aviation lost a whole army at Stalingrad.

It’s easy to reason out in what terrifying situation soldiers of the 6th German army turned out to be. People starved and froze to death. Besides, the Soviet army was inspired by its success and kept assaulting the enemy.

Extracts from the letters of German soldiers from Stalingrad pocket:

-“December 26th. Today we boiled a cat for celebration”

-“…Stalingrad is hell on earth, Verdun, red Verdun, with new equipment. We attack every day. If we manage to occupy 20 meters in the morning, Russians throw us back to where we were…:

Apparently, German soldiers’ spirit was extremely low. Well, what kind of spirit can there be, if in some German parts there was cannibalism? 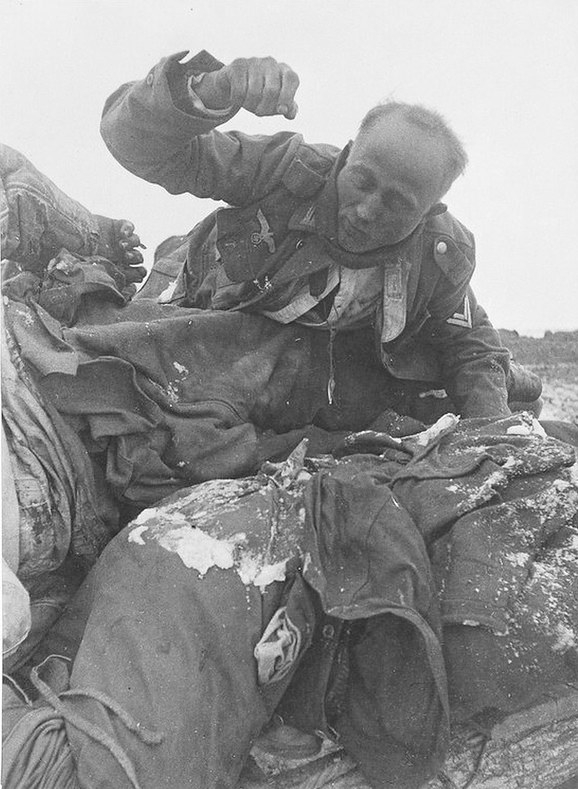 It's clear that Stalingrad airlift operation failure brought to the fact that an encircled in Stalingrad German grouping lost its force performance. However, Soviet commanders merit should not be underestimated. They conducted such a large- scale and complicated operation, thanks to which Soviet troops could weaken and later completely defeat the 6th German army. Yes, the defeat of the 6th army air supply operation is one of the most important reasons of fascist Germany’s defeat at Stalingrad, but not the single one.

Who is the one to blame for a tragedy at Stalingrad?

The war will always be the war, but pointless losses as a result of hunger and cold, as it was in Stalingrad, could be avoided. On my personal opinion, there are two people to blame- Reich Chancellor Adolf Hitler and Reich Minister of the Ministry of Aviation Hermann Göring. The first one suffered from megalomania, overweening conceit of personal truth, boundless egoism and all that together with a low level of military- strategic vision led to a catastrophe at Stalingrad. The second one is to blame for a wrong estimation of forces and resources of Luftwaffe and for an unfolding situation at Stalingrad, also he gave Hitler an impossible promise to help completely supply the 6th army. 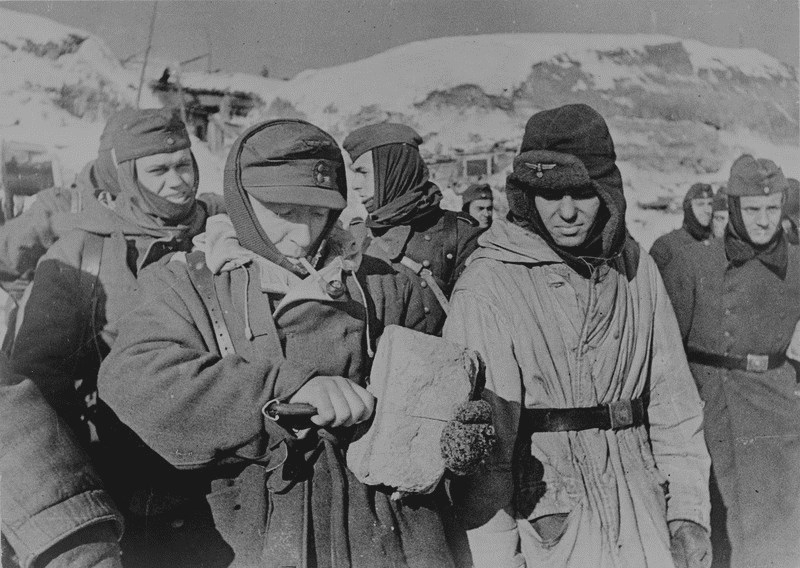 Should we also blame the commander of the 6th army Friedrich Paulus or Erich von Manstein who tried to deblock him? More likely no, than yes. Paulus strictly obeyed to the orders of higher command, and Manstein didn’t have enough power to conduct a successful operation to deblock the 6th army from the very beginning. However, if Manstein ordered Paulus to battle his way towards a tank spearhead of the first one, when they were closer to the pocket… Or of instead of Paulus a commander of the 6th army was Walter von Reichenau, probably Stalingrad battle didn’t end so sadly for German people.

Carrying out digs in the district of Stalingrad pocket we often find things which prove that complication position in which service men of the Wehrmacht, the Luftwaffe and even the Kriegsmarine (we are going to talk about sailors, who happened to be in Stalingrad, in the following articles) turned out to be. Evidences for that were big unofficial cemeteries of German soldiers, huge arroyos, where horseshoes, saddles and bones of division horses eaten by Germans still remain, as well as personal belongings and unsent letters of soldiers to their homeland… 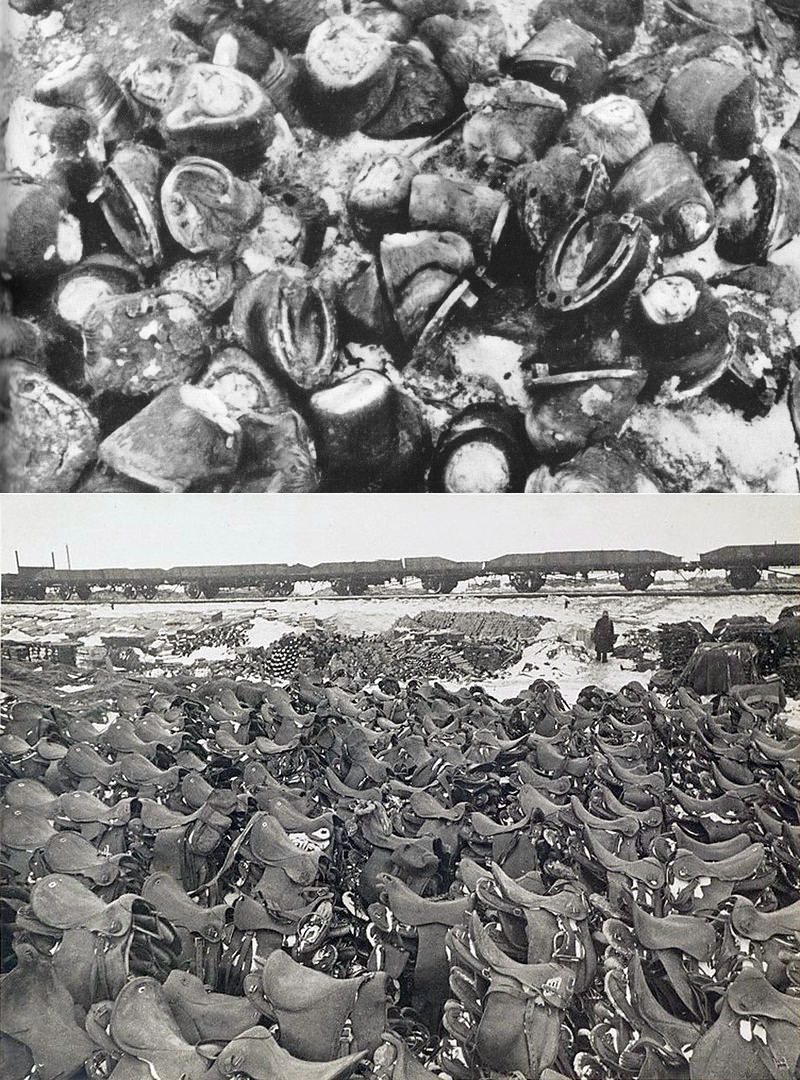 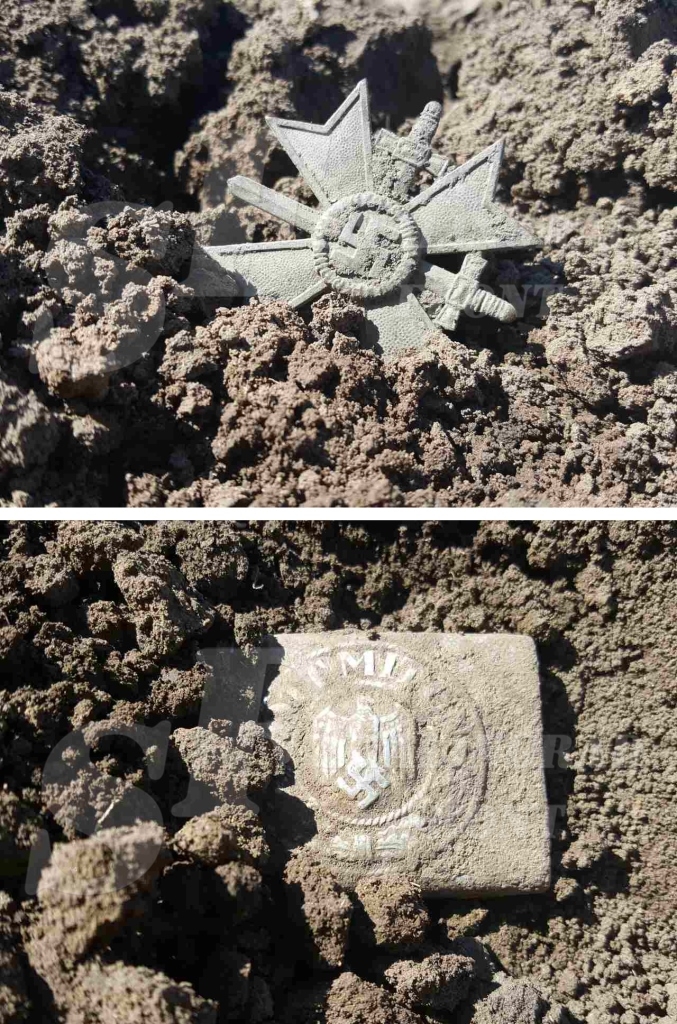 War Merit Cross and Buckle “Got Mit Uns” – found by the stalingradfront.com team at Stalingrad

If you are interested in the history of Stalingrad battle, you can buy some found relics in our store, which you can do following the link and choosing a interesting section - https://stalingradfront.com/catalog/