Repost on Facebook and Twitter
The chronicle of the Soviet counter-offensive at Stalingrad ... On the morning of December 12, 1942, the German army group "Goth" launched an offensive. Operation "Winter storm" has begun. 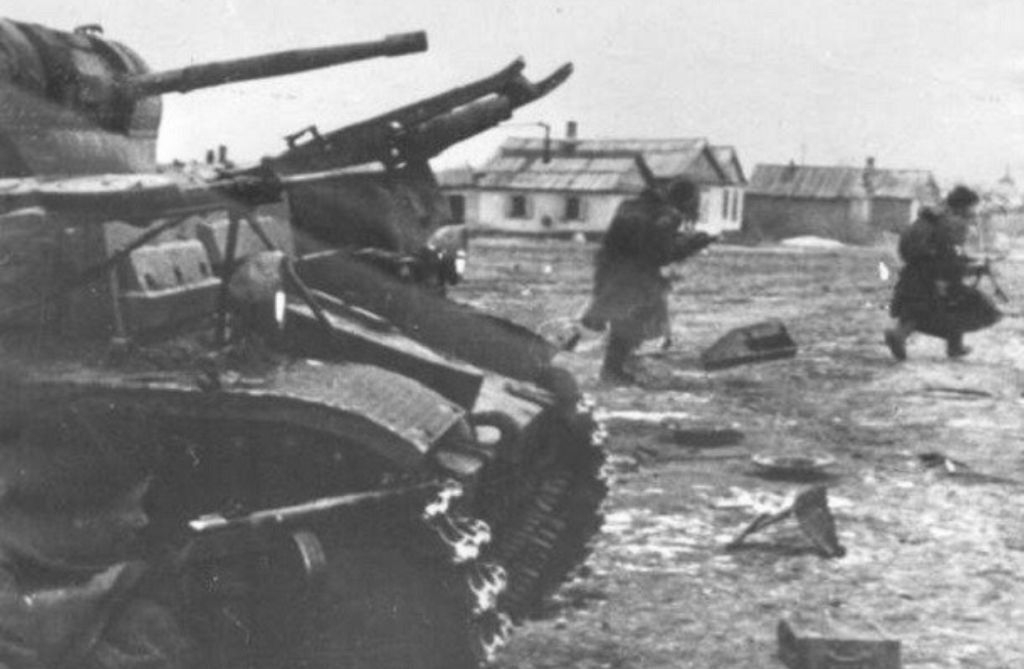 The enemy began to operate from the Kotelnikovo area, in a general direction to the northeast, the main blow was delivered by the enemy on a narrow section of the front along the Tikhoretsk-Stalingrad railroad. Here came the 6th and 23rd enemy tank divisions of the 57th Panzer Corps, opposed by our 302nd and 126th Infantry Divisions of the 51st Army. Cavalry and infantry German-fascist troops operated on the flanks of the tank divisions. The commanders were sure that south-west of the station. Tundutovo they will be able to connect with the Paulus grouping.
The enemy began with a powerful artillery preparation, which enabled him to break through
Defense in the lane of the 302nd Infantry Division at the Kurmojarsky semi-station. The soldiers of this division are stubbornly resisting. But the enemy had a great superiority in tanks and aircraft. This ensured the success of the operation.
Under these conditions, the commander of the Stalingrad Front, Colonel-General AI Eremenko, demands that the commander of the 51st Army keep the line occupied by his troops and restore the situation in the sector of the 302nd Infantry Division. The 235th Flamethrower Tank Brigade and the 87th Rifle Division are sent from the reserve of the front to help the 51st Army.
At the same time, the commander of the 5th Shock Army, Lieutenant-General M. M. Popov, is ordered to speed up the concentration of the army's troops for an offensive in the Rychkovsky area in order to eliminate the German bridgehead there.
In the afternoon of December 12, the divisional panzer divisions seek to reach the Aksai Esaulovsky river and seize the bridgeheads on its right bank. Soviet soldiers are bravely defending their positions.
With the onset of darkness, the advanced units of the 6th German Panzer Division manage to reach certain areas to the southern bank of the river. Aksai, and the 23rd Panzer Division - to the area north of Nebykov. Parts of the 302nd Infantry Division went to the Chilekov-Nebykov line-the Ternovy state farm. After mastering Gremyachy and traveling 161 km, the Germans tried to reach the flank and rear of the 126th Infantry Division and pressed her right flank regiment, but were stopped.
So begins the defensive-offensive Kotelnikovo operation of the troops of the Stalingrad Front, which will end only on December 30.
Again, every Soviet soldier understands that one must hold out to the approach of reserves at all costs, and not let the advancing enemy come together with the surrounded group. For our troops, as in the days of the heroic defense of Stalingrad, an order sounds: "Not a step back!".
Soviet soldiers heroically executed this order. On December 12, 1942, Lieutenant-Colonel Mikhail Diasamidze was particularly distinguished. With his regiment he skillfully organized the defense of an important district in the village. Verhnekumsky. Within five days, the personnel of the infantry regiment repelled 30 attacks of large infantry and enemy tanks. With a personal example, Diasamidze encouraged the fighters to take decisive action to defend an important area, he was wounded, but he did not leave the battlefield until the task was accomplished.
By decree of the Presidium of the Supreme Soviet of the USSR of December 22, 1942, for exemplary fulfillment of combat missions of the command on the front against the German invaders, and shown with courage and heroism, Mikhail Stepanovich Diasamidze was awarded the title of Hero of the Soviet Union.
Leaving your personal data you agree its processing. Personal data is any information that refers to you as a personal data owner (full name, date of birth, city of residence, contact phone number, e-mail address, occupation etc.) Your consent applies to the implementation of any actions by Stalingrad Front regarding your personal data, which may be requested for collecting, arranging, storing, detailing (updating, changing), processing (for example, sending letters and making calls) etc. under the existing laws. Consent to process your personal data is for an indefinite term, but may be recalled by you (all it takes is your request to Stalingrad Front). Sending Stalingrad Front your personal data you confirm that you are familiar with rights and duties in accordance with "Personal data protection".