During the First World War battles Romania suffered heavily in infantries due to a big number of servicemen wounded in the head. So following an example of other countries at war in the Romanian Army, they came to a conclusion that it was necessary to equip their soldiers with battle helmets. To accomplish this, they purchased 90 000 Adrian helmets (Le casque Adrian M1915) in France, and in the spring of 1917 they were already accepted for service. The helmets were painted in grey and blue color, an oval emblem with King Ferdinand I’s monogram was attached at the front - two crowned “F” characters. After Carol II came to power, the front emblem was replaced by a variant with a new leader monogram - two crowned “C” characters. 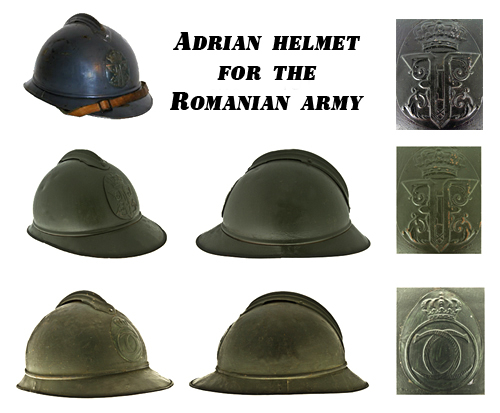 A 1916 model was also used at WW2 battles. For example, they were found at the Easter front, more specifically, in the Crimea and especially often in Sevastopol. While digging in Stalingrad our team hasn’t found a 1916 model of Adrian helmets on Romanian position, but if it happens, this fact will not be surprising. 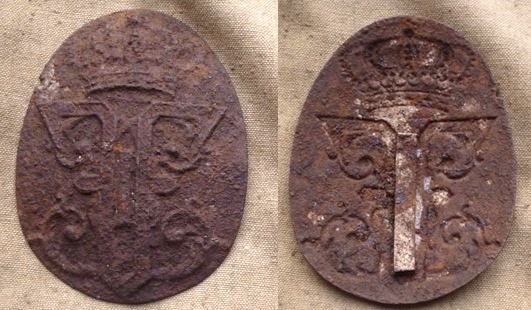 An emblem with a Ferdinand I monogram found during diggings

In 1937 a military command of Romania makes a decision to replace an old - fashioned Adrian M1915. A Dutch steel helmet M34 (Helm Model 1934) was chosen. It got a name Cască model 1939. The first order was for 300 000 units, and 800 000 more later. It was painted in different color shades of khaki, and at the front part of a helmet there was still an emblem with Carol II monogram. After his abdication in 1940 an emblem was supposed to be removed, but in practice, it wasn’t done. Exactly this model of Romanian helmets is often found at diggings near Kletsky farm at Stalingrad. By the way, you can buy such model, if you visit our store following the link - Romania.

After the Netherlands were occupied in May of 1940, Germany handed Romanian allies trophy resources of Dutch helmets M27 (Helm Model 1927) and M34 (Helm Model 1934), Dutch emblems were removed, and national ones with Carol II king monograms were attached instead.

This new model was produced in Holland and started to be supplied in Romanian Army in 1943. The only difference from a previous model was the supply with a German liner M31, which was produced by a Berlin company Biedermann und Czarnikow. The front emblem was lacking.

In the end of 1942 Romania purchased from Germany a batch of 800 000 steel helmets of 1935 sample (Stahlhelm M35) for military cavalry units and mountain divisions of the regular army. There are known cases of Romanian soldiers wearing German M35 earlier, almost since Romania joined the Second World War. At the same time, such practice was more of an exception, because at the early stage of the “Barbarossa” operation Romanians were supplied with German helmets only upon an initiative of German field commanders in the districts of joint battles. In the course of the war some Romanian divisions in particular cases were equipped with later models - 1940 and 1942 samples.

In the beginning of 30’s an Italian army was equipped with known French Adrian helmet models of 1915 and Italian models of 1916. However, increased requirements to the battle suit under the conditions of modern mobile war made an Italian command initiate the production of their own new model. The first experimental model appeared in 1931. Mussolini liked this variant, but still it wasn’t accepted for service due to technical flaws, although it became a prototype of the main battle helmet of an Italian army until 80’s of the 20th century. As the helmet was designed in 1933, this model had a marking M33. The supply of a new design to the army was delayed and only started in 1937.

A new model had an original, a little prolate form guaranteeing recognizability to a soldier and likening him with an ancient Roman army legionary. It was made of nickel and steel alloy, but, for example, for the police it could be made of aluminum. Thickness of the wall was 1,2 mm, and its weight, depending on the size, changes from 1100 to 1200 grams. An Italian M33 had three size options - 59-61, 57-58, 55-56. The size was marked on the liner.

A liner was made of a unitary block of bock (over the last years of the WW2 the bock was replaced by a fabric soaked in wax due to economic difficulties) and consisted of eight tongues clenched together in the upper part by a line. The liner was seamed in a forehead part and had enough holes providing good ventilation. The liner was attached to ventilation holes with three clenches. Tellingly, the helmets supplied in divisions fighting in Africa, had an additional, the forth ventilation hole. 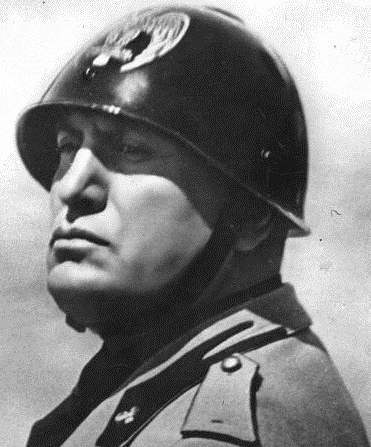 From 1936 to 1940 a helmet was painted in light grey-green or grey color, from 1940 to 1945 the helmet was painted in dark grey-green or grey color, and the black color was used for military officials and the police. In Italian army corps emblems were on the front part of the helmet. However, during the war, applying emblems wasn’t mandatory due to total disarray in the army at those times. Before the World War II began, M33 underwent battle tests in Spain during the Civil War (1936-1939) and the Winter War between the USSR and Finland (1939-1940). During mentioned military operations, M33 performed as quite a reliable and comfortable helmet.

When digging near Stalingrad our team StalingradFront not often but still managed to find Italian army battlesuits. By the way, you can find an Italian helmet M33 in our store if you follow the link - Italy.

Since the middle of 30’s Hungary, following the example of other countries, decided that it was necessary to supply its army with a new battle helmet which satisfied the requirements of the modern war. However, no money was allocated to design their own helmet, so the Hungarians decided to use other countries’ designs. The best variant at that time was a German Stahlhelm M35. So in 1937 a Hungarian helmet M37 was accepted for service. There’s a confusion with marking a Hungarian M-37. In Russia M37 is considered to be the right one, but in many English speaking sources there’s an opinion that a Hungarian helmet has a marking M35 (like a German Stahlhelm M35). 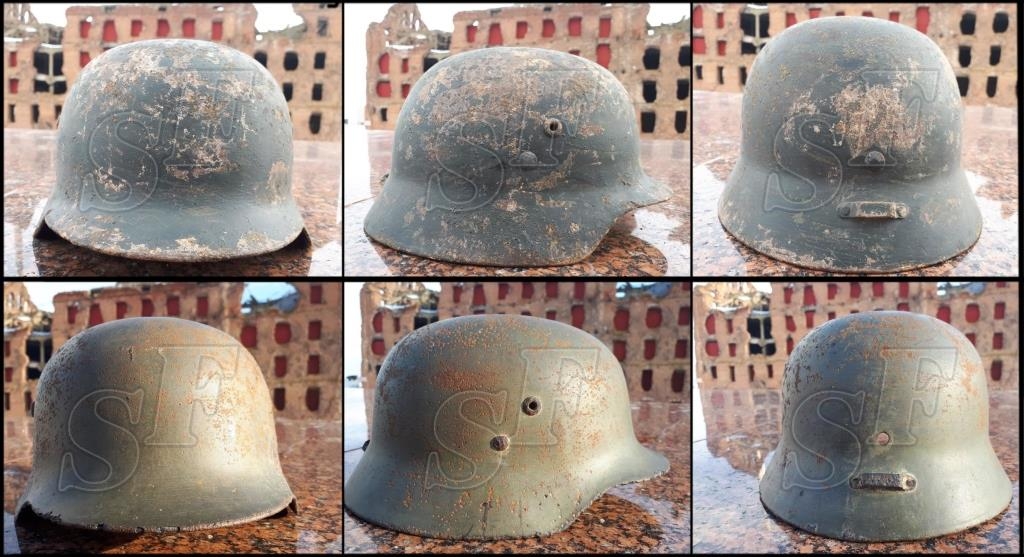 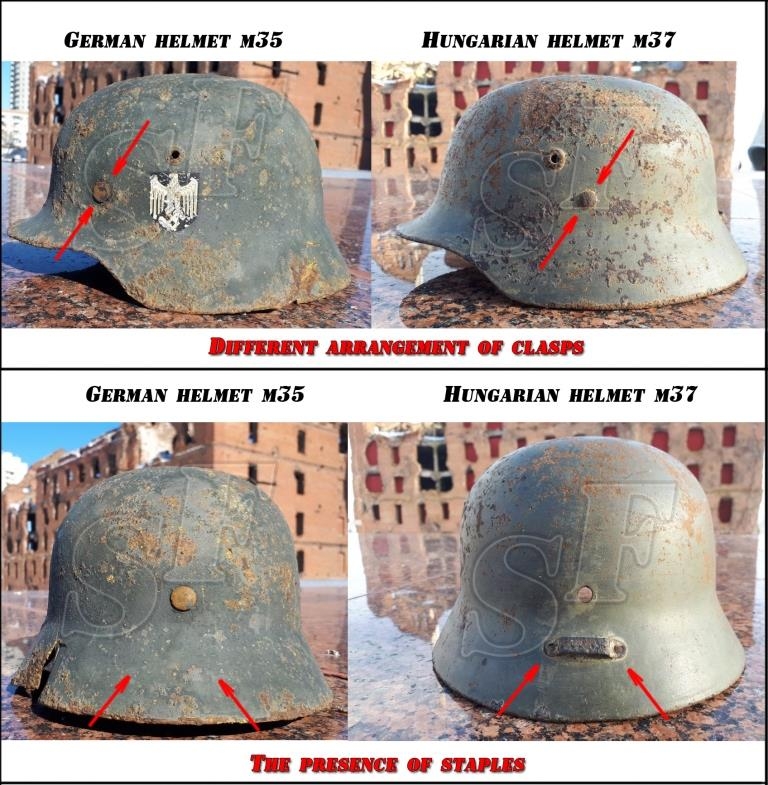 How to easily distinguish a German helmet from the Hungarian one

Besides, M37 was made of steel of rather low quality. The 1937 model was painted in light-green, sometimes tan color. Besides the army, M37 was used by the civil defense forces, also by the fire service and police, in that case the helmet was painted in dark blue, black or blue colors. It’s worth mentioning that a Hungarian helmet was widely used by a Finnish army, including the Winter War. 200 000 soldiers and officers of the Hungarian army took part in Stalingrad battle, so our team StalingradFront finds this helmet from time to time. If you follow the link, you can see the relics of the WW2 - Hungaria.