Soviet helmets of the World War 2

Soviet helmet SSh40 was the main USSR helmet during the Second World War. We will tell you about this helmet and its previous versions (SSh36, SSh39) in this article.

In 1920-1930s the Red Army used Adrian helmet purchased in France. It’s not known why the Army leadership of the USSR didn’t like that model, but in 1934 they started producing their own helmet. As a result, in 1936 new model SSh-36 was accepted for service.

A new SSh-36 got an original semi-spherical shape with a cap pushing out and side pent slopes. On the upper part of the helmet there was a comb which served as a firm rib and covered an air hole (this element was obviously borrowed from an Adrian helmet). SSh 36 was painted in a dark-green or khaki color. On a forehead part there was a five-pointed star contour painted in red color.  This first own-produced Soviet helmet served for the Red Army soldiers in many military conflicts, in particular:

During these military operations a number of helmet deficiencies were revealed -

However, despite of this fact, these flaws, the first years of the World War II a big part of Soviet troops was equipped with these helmets. This, by the way, is proved by diggings in the district of Stalingrad. Our team found several SSh-36 on defense positions near Kalach-on-Don.

In 1939 Army’s requirements for a more accomplished helmet for a maneuverable warfare were taken into account and an model SSh39 was designed and put into production. This helmet became a prototype of a famous Soviet SSh40, which was produced since 1940. SSh40, unlike a 1939 model, had a firmer and simpler liner. Due to this fact, these two helmets were different from one another in a liner attachment, specifically in the number of clenches attaching the liner to the helmet. Model 39 had three of them, which wasn’t enough for a reliable liner attachment. In SSh40 these deficiencies were rectified, and now the liner was attached with 6 clenches, which was safer.

Russian SSh-40 was made of alloy armor steel 1,2 mm thick. It’s worth noticing that due to the use man-made materials, a liner tickled the skin and grazed soldier’s head in case of long wearing (a German steel helmet liner was made of leather, that’s why German soldiers never faced such problems).

In 1942 a liner construction was updated. Now the liner consisted of three tongue parts. It was made so that the soldiers could wear a helmet with other headwear (for example, a fur cap). In the upper part the tongues was tied with laces to adjust the size. In the inner part of each toongue there was a cotton damping pad. A duffel chin strap consists of two halves sticked to rings on the side faces of the helmet.

SSh40 was produced in only three sizes, the weight of the biggest one (without including liner weight) was 800 grams. SSh-40 was painted in olive of khaki color, sometimes there was a five-pointed star painted at the front. In the inner side of the helmet, in the back of the head near lower lip there was a stamp of the manufacturing plant, the year of manufacture and a size stamp. 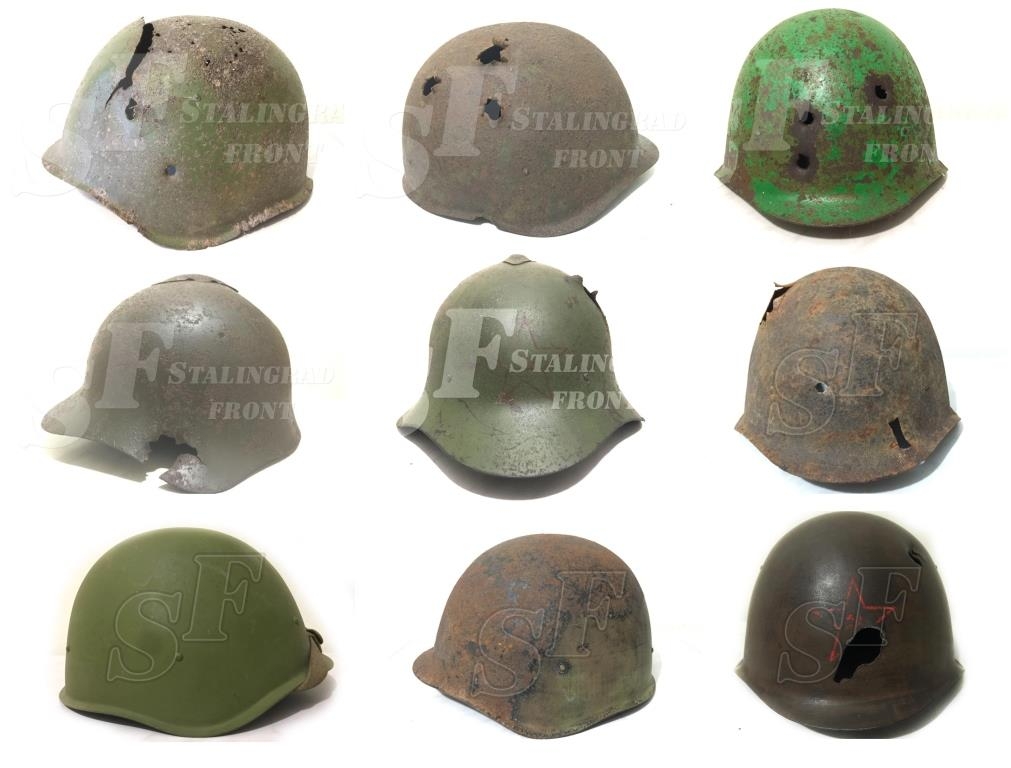 Big collection of Soviet helmets of the WW2 period on sale

Soldiers marched up to Berlin in this helmet. That is why it is not surprising that this model of a Soviet SSh 40 can be found at all battle places of the Soviet troops. Our native Volgograd (Stalingrad until 1961) city is not an exception. Our team often finds SSh40 during diggings near the city. If you want to connect with the history of the Soviet Army, you can buy a found near Stalingrad Soviet SSh-40 in our store. Click the link - Soviet helmets of World War 2, and you will see a wide choice of SSh40 helmets for sale.