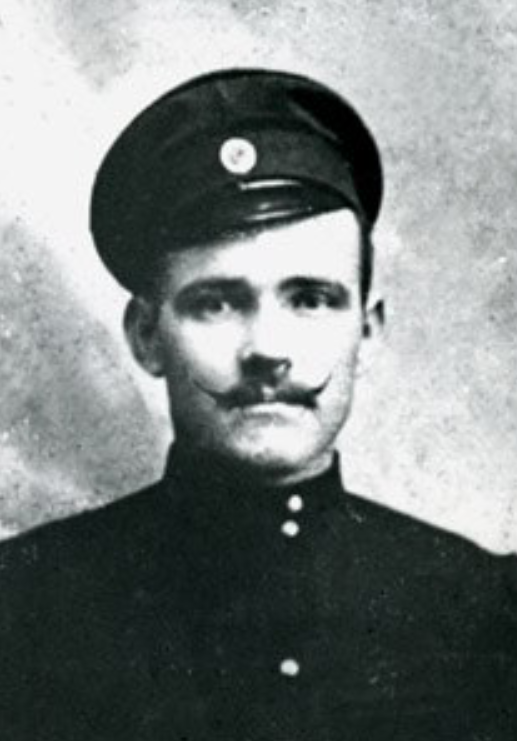 Lomakin Pimen Andreevich, born in 1882, education - primary, a poor Cossack, a native of Krylov's farm (the former Ataman stanitsa of the Salsk region) now Zavetinsky district of the Rostov region.
In 1902 he was called up for active military service. After military service, he was engaged in housekeeping and worked for hire.
In the 1-st world war was drafted into the army, served in the 39th Cossack regiment.
During the February Revolution, he was chairman of the Cossack Hundred Committee and a member of the regimental committee. In October 1917, he returned to the Don, at the end of November 1917, installed Soviet power in the hamlet and was elected chairman of the Soviet and created a partisan detachment from the Cossacks and non-townsmen who arrived from the front.
Lomakin acted in the villages and villages of the Salsk and 2nd Donetsk districts to establish Soviet power and recruit volunteers in the detachment.
Lomakin's detachment from November 1917 to October 1918 entered into battles against the White Cossacks General Gnilorybov, Popov and others in the Salsk steppes, on the Manych - until March 1918, and from March to October in the Kotelnikov area.
In November 1918, the First Kotelnikovo Socialist Division and Lomakin's detachment merged into the equestrian corps of Dumenko and Budyonny, and its squadron operated until March 1920.
Later, Lomakin led the fight against banditry, worked on economic work in the Kotelnikovsky district of the now Volgograd region.
During the Great Patriotic War Lomakin was an active participant in the partisan detachment, which he himself created and fought against the fascists in the Don steppes of the Stalingrad and Rostov provinces. The detachment, consisting of four small partisan groups of the Kotelnikovsky and Verkhnekurmoyarsky districts (53 fighters), was transferred across the front line. While maintaining direct contact with the 28th Army, a detachment under the command of P.D. Lomakin conducted active combat work.
"Lomakin's detachment stopped at the Bazovaya girder near Kiselevka, where a summer livestock farm was located, which was considered deaf, which is why the partisans chose it.
Not far away there were a few skeins of straw. At the top of the largest pile of guards, the guerrillas staged an observation post. Once, four carts drove up to the stacks. Four Romanian soldiers began to impose straw. So they discovered the guerrilla post. Two partisans opened fire. They killed three, and the fourth, wounded, managed to jump on his horse and gallop off. He raised the alarm.
The invaders surrounded the gully, in which the detachment of Lomakin was hiding. Several times the Germans suggested that the partisans surrender. But the detachment fought to the last. No one gave up alive.
The battle ended in the evening of the second day. The Germans brought to Kiselevka seventy corpses of their soldiers and officers. And the next morning they ordered to bury the dead partisans.
They did not allow digging a mass grave, but ordered the bodies of the fallen heroes to be thrown into the well and cellar. The rest were simply sprinkled with earth.
In the battles of the Kiselevka farm, a detachment of guerrillas destroyed 185 German soldiers and officers, wounded 220.
The fate of the detachment Lomakin did not know anything until the spring of 1943.
March 20, 1943 in Kotelnikovo took place the funeral of the partisans of the Patriotic War, who died in the battles with the German invaders. Now the ashes of the heroes rest in the Komsomolsky Park in the mass grave in Kotelnikovo. "
Leaving your personal data you agree its processing. Personal data is any information that refers to you as a personal data owner (full name, date of birth, city of residence, contact phone number, e-mail address, occupation etc.) Your consent applies to the implementation of any actions by Stalingrad Front regarding your personal data, which may be requested for collecting, arranging, storing, detailing (updating, changing), processing (for example, sending letters and making calls) etc. under the existing laws. Consent to process your personal data is for an indefinite term, but may be recalled by you (all it takes is your request to Stalingrad Front). Sending Stalingrad Front your personal data you confirm that you are familiar with rights and duties in accordance with "Personal data protection".