What would happen if the Germans won the battle of Stalingrad?

The Battle of Stalingrad is the largest land battle during World War II that took place from July 17, 1942, to February 2, 1943, between the forces of Nazi Germany and the USSR.

It is known that Nazi German forces launched a surprise attack on the USSR on June 22, 1941. In the first year of the war, the Germans won victory after victory and quickly seized the entire territory of modern Ukraine, Poland, and Belarus. When the Germans approached Moscow, the USSR was able to counterattack the forces of Germany and the front stabilized.

Realizing that the strike on Moscow would now be predictable, Hitler planned to strike the south of the USSR, capturing the Caucasus and the country's main water artery - the Volga River. After winning the Kharkov (Kharkiv) battle, Hitler ordered the 6th Wehrmacht army to go to Stalingrad. The 6th Army was under the leadership of Friedrich Wilhelm Ernst Paulus.

Hitler wanted to capture Stalingrad not only because it was an important strategic point and ideological lever of pressure. But also, because the city was named after Stalin and its capture would undermine faith in the leader, thereby Hitler’s power will be in no doubt.

Briefly about the course of the Battle of Stalingrad

It is possible to talk about the course of the battle for a very long time, but we will briefly review everything. The first stage of the battle was successful for the Germans, they easily broke through the defenses of the city and by August 23, the Wehrmacht armies broke into the city. Before entering the city, German aviation launched horrific airstrikes, which killed 100 thousand civilians, and turned Stalingrad into ruins.

Already in September, the Germans captured half the city along the Volga River. Now the whole river was shot through, and forcing became a real test for the Soviet troops. The fighting in Stalingrad went for every house, for every street. Tank factories produced tanks from the conveyor belt directly into battle, sometimes even without ammunition, and those who assembled the tank became the crew.

When winter came, the Germans faced a crushing cold and Soviet snipers. The legend was Vasily Zaitsev, who killed 222 enemy soldiers in Stalingrad, including officers, and 11 professional snipers.

In November, the Red Army launched a counterattack, which was accompanied by huge losses, but nevertheless, Soviet soldiers gradually pressed the Germans further and further into the city. In January 1943, the 6th Army was defeated in more than two parts and the Soviet army began to destroy these formations, Paulus surrendered on January 31. On February 2, the remnants of the German army surrendered.

The results of the battle of Stalingrad

The USSR won over the forces of Nazi Germany, thereby completely seizing the initiative during the war. If before that the German army was invincible, now it was forced to retreat with huge losses of both manpower and equipment.

The USSR lost during the battle more than 1 million 200 thousand people who were killed, about 4 thousand tanks, 16 thousand guns. The Germans lost about 1 million people, less than 2 thousand tanks, 700 aircraft, a huge amount of other equipment.

As a result of the battle, the 6th army of the Wehrmacht was completely defeated, which radically changed all the plans of the German command. Meanwhile, the authority of the USSR in the political arena has greatly increased, and the Allies realized that the Germans could be defeated. The fighting spirit of the Red Army was at its best because the fighting spirit of the Wehrmacht forces was undermined.

A little-known fact - the Germans relied on Stalingrad. And Adolf Hitler gave the task to the Minister of Foreign Affairs Joachim von Ribbentrop to persuade Turkey and Japan to enter the war against the USSR. In their turn, the Turks and Japanese set a condition - the Germans should take Stalingrad. Therefore, the war machine of the 3rd Reich suspended the offensive in all other sectors of the front and concentrated its forces around Stalingrad. We all know how the Stalingrad bloody slaughter ended, but if in September-October in 1942 the Germans could find reserves and get through those 200 meters in the city that separated them from victory, what could have happened then?

What would happen if the Germans won the battle of Stalingrad?

It is known that History does not tolerate the subjunctive mood, but nevertheless let us fantasize a little on this subject ... I want to warn that everything said below is just a version of the author of the article and may not coincide with any other point of view.

Let us suppose that in September-October in 1942 the Germans would have captured Stalingrad, managed to take up defenses, and sent the liberated forces to stabilize the front, removing unreliable Romanian formations from the flanks. Seeing this situation, the Soviet command would have been most likely to give up the attempt to encircle, because now it would have been much more difficult to close the circle around Stalingrad. 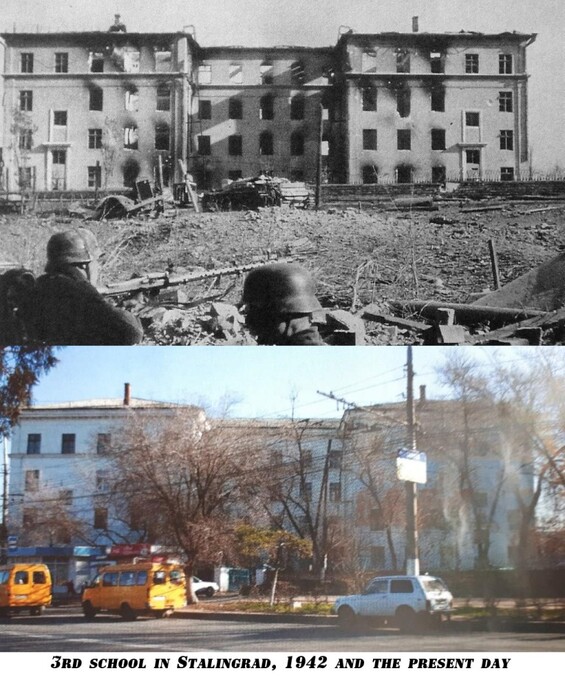 The last 5 months of the battle were the most bloody, therefore, the 6th Army would have avoided these losses and retained most of the combat-ready, highly experienced personnel, as well as most of the tanks, aircraft, and guns. Suppose in November 1942 there would have been 400 thousand soldiers in service. Let us agree that these are sufficient forces to pull back a big part of the Red Army.

As we recall in the fall of 1942, German troops occupied most of the Kuban and the North Caucasus, but after the defeat in Stalingrad, they were forced to retreat due to the threat of encirclement. And accordingly, Hitler’s plans to capture the Caucasian oil collapsed. In our “alternative” version of the history, the command of the Wehrmacht, without fear of encirclement, would have captured the rest of the Caucasus and gain access to oil, and, consequently, to fuel, which they needed.

You probably ask yourself: “Would the Russians give away the Caucasian oil so easily?” Yes, it is highly probable! And here's why. First of all, in the fall of 1942, when the situation in Stalingrad was ambiguous, German troops had already captured most of the North Caucasus. Secondly, (and this is already more interesting) Stalin most likely would have thrown all his reserves to another sector of the front.

The victory of Axis powers in Stalingrad would have prompted Turkey, according to the agreements, to enter the war with the USSR. In 1942, mobilization was carried out in Turkey, its armed forces reached a population of 1 million people. With the beginning of the German offensive, about 750 thousand of them were transferred by the Turks to the Soviet-Turkish border in the Batumi region. So, Stalin's reserve armies would have been put forward to meet them.

And if we assume that the joint actions of the Turks, Germans and their allies would have been successful, then it is likely that the Empire of Japan would have also attacked the eastern borders of the USSR. Hence, the Land of Soviets would have waged war on two fronts, like Germany in both world wars. And we know that this makes for misery.

So, let's briefly summarize what the defeat of the USSR in the Battle of Stalingrad would have lead to:

And now the main question - how would have ended the Second World War if the Germans had captured Stalingrad? In my personal opinion, the war would still end with the defeat of Nazi Germany, but this took more time and, sadder, with much greater losses. But did the USSR have forces for this? Yes, it had!

Of course, one should not deny the fact that the Soviet people won WW2 thanks to the workers of factories and plants. Thanks to the dedication and self-sacrifice of a simple Russian soldier, the intelligence of military designers, and the skillful command of Soviet officers of all ranks. But still, in my opinion, a huge supply of human resources in the war played not the least role...