Memories of surrounded Germans from Stalingrad

This article represents German prisoners of war’s testimonies, as well as letters captured by the Red army on shot down German transport aircrafts, which stated that the position of troops in the Stalingrad area was getting harder every day.

I have nothing good to say about me - we haven’t had meat and fats supplied, and the only thought that bothers me is my stomach. However today my buddy brought me a whole pot of chitterlings, so my stomach doesn’t churn anymore. You can’t imagine, though, how thirsty I am. We are south of Stalingrad, very close to the Volga river, but it’s hard to get some water. You can’t believe what’s going on here and what I gave to go through sometimes. The other day a couple of dogs were passing by, but the one I shot turned out to be very thin… I starve at nights and my nerves are tense. You wouldn’t recognize me, that’s how much I changed.

“… I’m sorry I don’t write you often. We only receive mail by air. You must have no idea what’s going on? Day and night we have no rest, we barely get out of mud. I can’t say I’m good due to the fact that I haven’t washed myself for 14 days. Many soldiers from our division, including our commander, have been killed.

I’m very hungry, day and night we don’t get rest. My nerves are frayed, I talk in my sleep and one have to really shout at me to stop me. We won’t have any weapons soon, and we’ll fight as foot soldiers. Then the appetite will be completely gone… I’m sorry for my handwriting, I have hardly slept for 17 days and 17 nights”.

I think we still have the biggest cemeteries at Stalingrad…”

“…My lices are doing great, they eat enough. I can tell that by the quantity, there are so many of them that I have fear they’ll bite my neck down. If you stroke my neck, you can grab a bunch of them”.

“…The first day of holiday we had goose neat with rice, the second day- goose meat with peas. We’ve had only goose meat for a long time. Only our geese have four legs, and there are horseshoes on their legs. You can’t even imagine how fast people butcher. Ten minutes and there are single bones. 25 people take care it’s all eaten…”

“…The year will last long… As our song goes: “Yesterday I walked with a proud head, today I get my chest shot, tomorrow I will be dipped into a cold grave”.

From the German army prisoner’s protocol, the soldier of the 2nd battalion of the 376th Helmut Ludwig infantry division, born in 1916. Prisoned on December 3th in 1942 near Dmitriyevka village, west of Stalingrad. 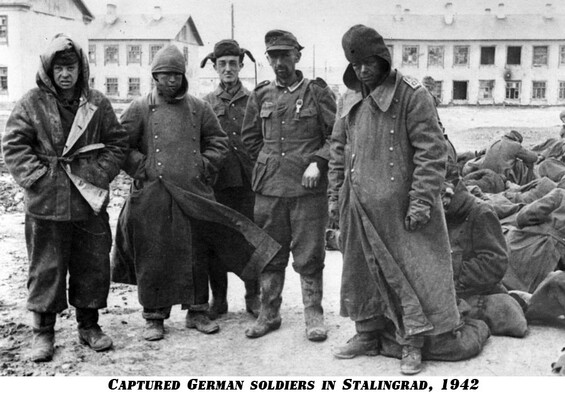 Question: What are the obstacles of your capture?

Answer: In the evening of December 2nd our battalion organized defense west of Dmitriyevka village. In the morning of December 3rd Russians opened strong fire. We hid in dug-outs. Suddenly the fire moved to the center of our position, and Russian tanks and many foot troops happened to be very close. My comrade suggested running back, but Russian troops were so close that we would have been immediately shot. I refused to run. My comrade jump out of the dug-out and was killed right away. I hid deeper in the dug-out and decided to wait how it would go, and when the advance force mover forward, I got our and yielded myself prisoner.

Question: Do German units get any support by air, by means of transport aircrafts?

Answer: On a limited scale but yes. I have to add that these transport aircrafts, as I heard it from a troop commander, deploy some soldiers from Waffen SS and Sturmabteilung to Stalingrad, apparently for the purpose of strengthening and boosting morale of surrounded troops. Wounded soldiers are evacuated by flybacks. I personally saw Waffen SS and Sturmabteilung soldiers in the 3rd motorized division near Novoalekseyevka, about 4-5 people per troop.

Question: What was the purpose of your volunteer surrender?

Answer: First of all, I’m Polish and I don’t consider it possible to guard interests of the Nazi, who enslaved my homeland.

Second of all, the position in my unit was so that I couldn’t stay there any longer. At the slightest hint of cowardice, desertion or evasive actions, soldiers get executed on the spot.

I was in the machine-gun unit, and in battles Ii had to carry heavy ammunition boxes, due to what I couldn’t move fast and during an offensive operation on August 8th I slightly stayed behind leading echelons. A feldwebel immediately came up to me and said if I did anything like that again I would be shot. I decided not to wait for that and on August 9th, on the contrary, I went ahead of all trying however not to be killed or wounded. Then, when the Russians turned the atack back, I hid in the dug- out and when our units backed off, I surrendered.

Question: Tell how soldiers in your division feel?

Answer: The soldiers of our diviion feel bad. From the very first day at the frontline we went through a lot. The situation with food is not so good either. Dor the past for days we got mouldy bread which was almost completely thrown away. Despite German troops advance at other front parts, many soldiers don’t believe in Germany’s victory. Each and all are afraid of winter and say tgat as soon as winter comes, the supply of food and ammunition will be very bad, and as Russians are good at winter battles, those of us who stay are left for dead.

From the interrogation protocol of a prisoned soldier of the 1st Romanian division Morin Diakon:

“Soldiers quetly critisize Hitler and Antonescu. Officers promise us that after the war we will get a lot of territory in Transylvania and Ukraine, but all we think about now is where to get some food, not the territory”.

From the interrogation protocol of a German prisoner of war, plane mechanic of a sensor aircraft Focke-Wulf, Non-commissioned officer Ruper Holzer born in 1919. Prisoned on August 14th 1942.

Question: What was the spirit of an aircrew of your division? What were the talks about war perspectives and the forthcoming opening of the second front?

Answer: Most of my comrades were not happy with the position at the front clearly evaluating what we saw: german troops are only there where they don’t get serious opposition. German troops advance at the Caucasus is fraught with known danger- they don’t have strong rear, and the key to everything is again Stalingrad; and it stays in the Russians’ hands, victories at the Caucasus will mean nothing. I personally don’t believe in Germany’s victory.

Time kills Germany. Autumn is coming. Now it’s clear that the German command won’t manage to completely execute plans before winter comes. And one more war winter is death for Germany wherever German troops are. We were interested in the second front matter, and there were lots of negotiations about that. Common opinion was that the English and Americans will definitely have an attemp to land on the continent, but they will only have luck if they put aside their traditional politics- fight by proxy- and make a sacrifice in terms of landing operations.

From the interrogation report of a voluntarily surrendered soldier of the 376th infantry division Reinhard Dickert, born in 1912. Yielded himself prisoner on September 18th 1942. 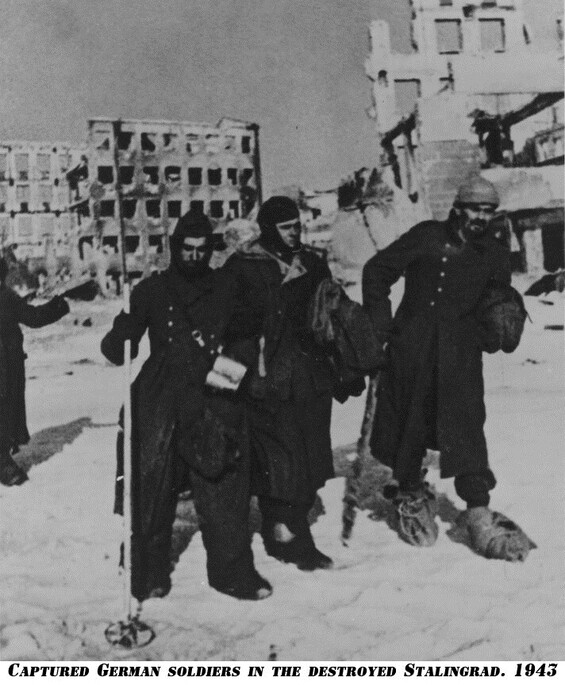 Question: What was the purpose of your volunteer surrender?

Answer: I am a sick man. I have been duty- free, but not Germany doesn’t care about that, they call everyone into the army. I was, too. I don’t want to fight for Hitler because I don’t support national socializm which brought my gamily and myself destruction. I don’t see enemies in Russians and I don’t want to be killed at the front.

Question: What was the spirit of soldiers in your troop?

Answer: The troop where I served was packed with 30-35 year-olds. Those were middle-aged people who had families and were not obsessed with Hitler’s propaganda. All of them don’t want to fight, they are tired and don’t believe in victory. They all believed that German troops wouldn’t be able to concor Stalingrad, they said it would be the same as with Moscow and Leningrad. Soldiers in our troop fought only because they were afraid to be executed. Now German army has very strict order. During the battle officers watch soldiers all the time, and at a single attemp to surrender or avoid action they execute on the spot.