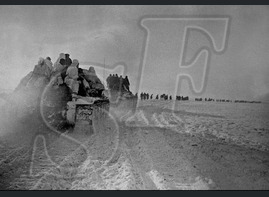 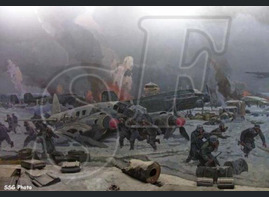 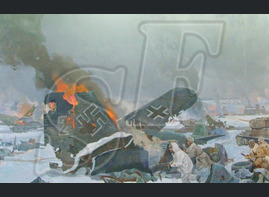 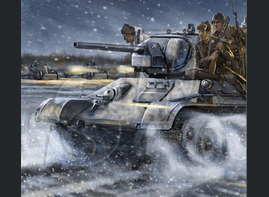 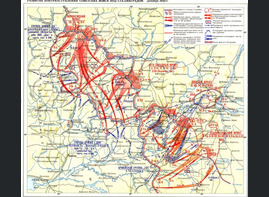 75 years ago, on December 16, 1942, began the Sredne Don State Operation, the same operation # Maly_Saturn - an offensive operation by Soviet troops to defeat the enemy's Boka-Morozov grouping and disrupt the attempt of the deblocade of the 6th Paulus Army.
Spent by Voronezh (commander - Lieutenant-General Golikov) and South-Western (commander - Colonel-General Vatutin) fronts.
Initially, the Soviet command planned after the encirclement in Stalingrad of the 6th German Army to conduct Operation Saturn-to defeat the German troops entrenched in the middle of the Don, and then to strike at Rostov-on-Don and thereby lock up enemy troops in the Caucasus and the Kuban.
However, there was no effort for such a grandiose plan, and on December 12 the Germans launched an offensive - Operation Wintergewitter (Kotel'novskuyu Operation) - an attempt to break through to Stalingrad and to unblock the surrounding grouping of Paulus.
The plan for the operation "Saturn" was changed, reduced to "Small Saturn": the strike was now being directed not south, but to the southeast, to Morozovsk, in order to defeat the Germans' Boka-Morozov grouping and to frustrate the attempt of the 6th German Army's deblocade.
The Soviet command intended to inflict the main blow by the forces of the 1st and 3rd Guards armies (the commanders - Colonel-General Kuznetsov and Lieutenant-General Lelyushenko) from the districts of Verkhny Mamon and Bokovskaya in convergent directions to the village of Tatsinskaya and Morozovsk.
The 6th Army of Lieutenant-General Kharitonov (since December 19, as part of the South-Western Front) was to break through the enemy's defense in the area of ​​New Kalitva and, developing an offensive against Kantemirovka, to provide the right wing of the South-Western Front.
The 5th Tank Army Major-General Romanenko got the task, in cooperation with the 5th Shock Army of Lieutenant-General Popov of the Stalingrad Front, to destroy the enemy grouping in the area of ​​Nizhnekhirskaya, Tormosin, and then, advancing on Morozovsk, to assist the troops of the 1st and 3rd Guards armies in the defeat of the enemy in the middle Don.
On the morning of December 16, Soviet troops launched an offensive.
Because of thick fog, aviation could not act, and the effectiveness of artillery fire was not high. The enemy offered stubborn resistance. The offensive developed at a low pace.
In the afternoon, when the weather improved somewhat, aviation began to operate, and artillery support intensified.
On December 17, the 25th and 18th, then the 17th and 24th Panzer Corps were put into battle. This allowed the Germans to break through the tactical zone of defense by the end of the day and advance 20-25 km.
By the end of December 18, the enemy front from New Kalitva to the village of Chernyshevskaya had been dismembered into 4 isolated areas.
The German-Fascist command, trying to stop the advance of Soviet troops, intensified the air strikes and transferred 4 tank and 4 infantry divisions from other sectors of the front and from Western Europe.
Despite this, the mobile troops of the South-Western Front advanced for 100-200 km during the 8 days of the offensive, and the 24th Panzer Corps of Major-General Badanov made the famous raid on Tatsinskaya, passing 240 kilometers, seizing the village of Tatsinskaya on December 24 and destroying it the outskirts of one of the main airfields of supply of the 6th German Army, surrounded in Stalingrad.
The offensive of the Fifth Panzer Army, launched on December 22, did not develop, but it pinned north of Tormosin to enemy formations intended to unblock the Stalingrad group.
By the end of December 24, the defeat of the main forces of the 8th Italian Army, surrounded in the districts of Alekseevo-Lozovsky and the village of Verkhnechirskaya, was completed.
By the end of December, the troops of the South-Western Front had reached the line of New Kalitva, Markovka, Voloshino, Chernyshkovsky, where they were firmly entrenched.
December 30 Sredneonskaya operation, or "Small Saturn", was completed.
As a result of the Sredne Don operation, the Soviet troops, having broken through the enemy front with a width of 340 km, defeated 5 Italian, 5 Romanian and 1 German divisions, 3 Italian brigades, defeated 4 infantry and 2 tank German divisions, seized about 60,000 prisoners, 176 tanks, about 370 aircraft, advanced 150-200 km and withdrew to the rear of Army Group Don.
The unlocking group barely missed the encirclement itself, and the Germans and their allies were forced to abandon further attempts to unblock the grouping under Stalingrad. Also, the threat of encirclement of the Caucasian group became more and more obvious.
The Soviet forces created favorable conditions for the subsequent offensive to the west and southwest, the abolition of the Paulus grouping.
Leaving your personal data you agree its processing. Personal data is any information that refers to you as a personal data owner (full name, date of birth, city of residence, contact phone number, e-mail address, occupation etc.) Your consent applies to the implementation of any actions by Stalingrad Front regarding your personal data, which may be requested for collecting, arranging, storing, detailing (updating, changing), processing (for example, sending letters and making calls) etc. under the existing laws. Consent to process your personal data is for an indefinite term, but may be recalled by you (all it takes is your request to Stalingrad Front). Sending Stalingrad Front your personal data you confirm that you are familiar with rights and duties in accordance with "Personal data protection".