What you need in the war? That would carry German soldiers?

The presence of pockets on the German uniform during WW2. 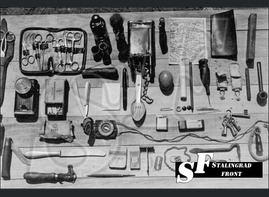 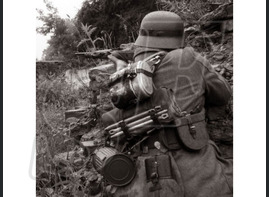 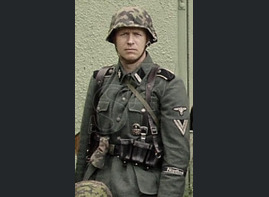 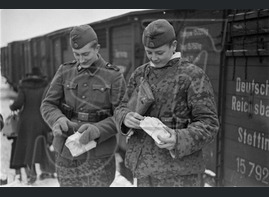 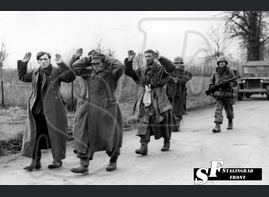 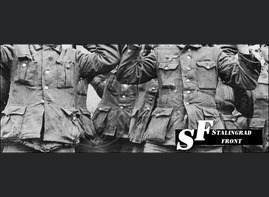 During the second world war, German soldiers wore woolen jackets(M36, M40 or M43) that had 4 external pockets: 2 chest and 2 at the bottom of the jacket. (Note: In late 1944, was designed the short model jacket, which is usually called M44. On this model there were only two external a rather large pocket located on the chest.) Other models of jackets, developed during the war such as cotton uniform for the tropical climate and the summer uniforms of cotton, was tested in tropical countries. However, they were completely copied from the standard wool uniforms and had the same amount of external pockets. All pockets had the same dimensions and closed a valve on a single metal button. Inside the jacket was a long narrow pocket located in the lower right corner, which was intended to hold two individual dressing packages.

Pants has two Welt pockets located on the sides of the legs, and one back Welt pocket. Also, the pants had a small pocket , which was located on the front right leg just below the belt line. It was designed specifically to carry a pocket watch. However this one quickly became unnecessary as to replace the pocket watch came wrist. Experienced soldiers quickly found a new use let and small, but the space - it was worn condoms, matches, or lighters.

In winter the coat showed all of the convenience of carrying personal things in pockets which were pretty deep. Also well proven bilateral military winter uniforms, which had two pockets on each side.

The memories of veterans:

- Oberrender Martin Eichenseer, appointed commander of Grenadier regiment 916 (352 infantry division), fought against the United States army 6 June 1944 in Normandy during the landing of the Americans on Omaha beach. After the war he recalled: "I was loaded down like a  donkey, on his neck hung the order of 7 ammunition belts to the MG, 20 grenades M39 ("eggs"), spread out through all the pockets and 20 grenades M24 ("kolotoc") that I put on the belt, boots and your Hiking backpack. Behind hung the rifle and about 500 rounds in each arm!

- Sturmann the Waffen-SS Conrad, who was during the war, sapper, and later Panzer-Grenadier in the second SS Panzer division Das Reich, just to note that: "Our pockets were always Packed what was necessary for survival at the front. We often went into battle lightly, leaving part of the equipment, but our pockets were Packed with ammunition and food."

- Carl Wegner (Wegner Karl) was just an ordinary Grenadier in a Grenadier regiment 914 (352 infantry division), when asked what he carried in the pockets during the war, he replied: "Wallet, pocketknife, crust of bread, a little book, like a Bible and my French dictionary. It was all useful stuff."

During the Normandy campaign in 1944 when American troops took pictures of a few things, found a  German prisoner of war:

1. Long pair of scissors in case.

2. Some small scissors and hemostat clamps in a small case.

7. A butter knife from the set.

17. The packaging for the blades.

German soldiers tried to carry everything you need and not only (Garter belt for stocking female). But even this did not help them to win the war!