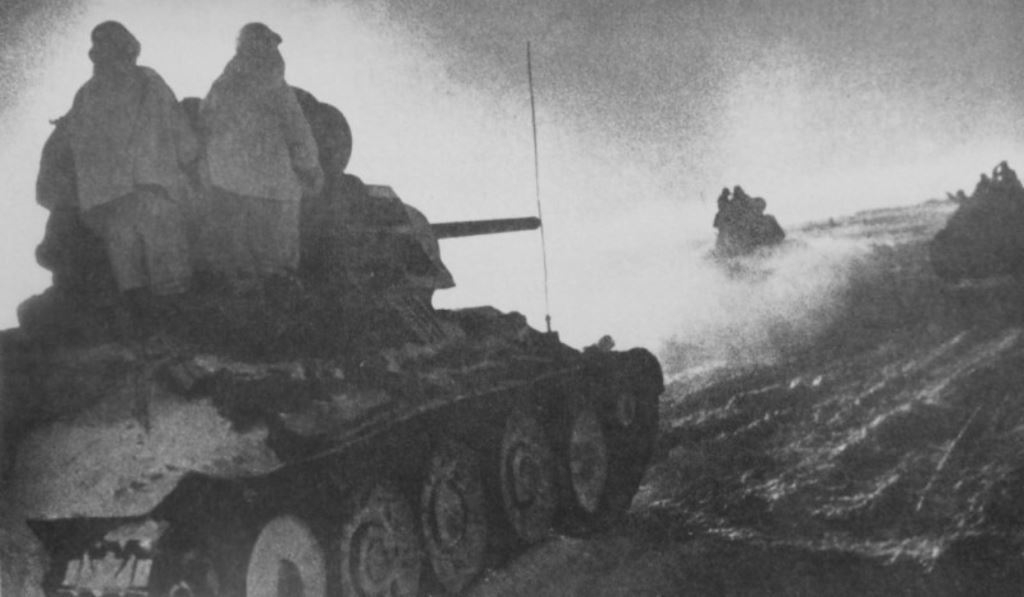 75 years ago, on December 12, 1942, Operation Wintergewitter (German Wintergewitter - Winter Storm) began; it was also a Kotelnikovskaya-operation - an operation of German troops, an attempt to deblockade surrounded by the 6th Paulus Army in Stalingrad.
Having completed the encirclement of a large group of German troops near Stalingrad, the troops of the 51st Army Major-General Trufanov of the Stalingrad Front (commanded by Colonel-General Eremenko), at the end of November 1942, left the north on the approaches to the Kotelnikovsky settlement, where they established themselves and went over to the defense.
The operation to unblock Paulus's army was entrusted to Army Group Don, commanded by Manstein, created by the OKH order of November 21, 1942. This group of armies included the 4th Panzer Army, the Hollidt Army Group, and the 6th Paulus Army, which was surrounded.
Before the Army Group Don was tasked with a strike from the south to Stalingrad to break through the corridor to the encircled 6th Army and restore a complete and stable front.
The main role in the offensive was assigned to the 57th Panzer Corps of the 4th Panzer Army. It consisted of two divisions. One of them was the 6th Panzer Division of Erhard Raus with 159 tanks. The division has just arrived from France, where it was resting and re-forming after the rout that it suffered during the Soviet counter-offensive near Moscow. The second division was the 23rd Panzer Division under the command of Baron Hans von Boyneburg-Lengsfeld, thrown from the Caucasus. In its composition, there were 30 tanks. Soon, the 17th Tank Corps, transferred from the Army Group Center, joined these divisions. Major-General Fridolin von Zenger and Etterlin commanded the division, and the division consisted of 60 tanks.
6th Panzer Division, the main forces of which formed a shock wedge of the offensive, the task was to break through the positions of the Soviet forces near the Kurmoyarskaya station and then inflict the main blow in the direction of the Aksai River. The mixed regimental group from the composition of this division was to capture the Upper Apple and clear the Russians of the left flank and the rear of the advancing troops. The 23rd Panzer Division was to advance east of the railway tracks and through the Nebiks go to Aksai.
The operation "Wintergewitter" was a tactical surprise for the Soviet command. Of course, the release of the blow was expected, but not from the south, but from the west, where the distance between the main forces of the Germans and the surrounding ones was the smallest.
The 302nd Infantry Division of the Red Army, which assumed the main blow, was quickly dispersed, as a result of which a gap appeared in the front of the 51st Army. This provided the German units with rapid progress. By the end of the day, the 6th Panzer Division reached the southern bank of the Aksai River, and the 23rd Panzer Division - to the area north of Nebykov. On December 13, crossing the Aksai, the 6th Panzer Division reached the village of Verkhne-Kumsky. Part of the 235th separate tank brigade with its 234th separate tank regiment, the 20th Anti-tank Artillery Brigade, the 1378th Infantry Regiment of the 87th Infantry Division and the 4th Mechanized Corps of Major-General Volsky .
The fighting for the Verkhne-Kumsky continued with varying success from December 14 to 19. Only on December 19, the strengthening of the German grouping by the 17th Panzer Division and the threat of encirclement forced the Soviet troops to retreat to the boundary of the Myshkov River. The five-day delay of the Germans near Verkhne-Kumsky was an undoubted success of the Soviet troops, since it allowed them to gain time to pull up the 2nd Guards Army, Lieutenant-General Malinovsky, who instead of participating in the liquidation of the encircled group was thrown to intercept the deblocking troops (as insisted by Lieutenant-General Vasilevsky and against which the commander of the Don front, Lieutenant-General Rokossovsky protested).
On December 20, German troops reached the Myshkov River. Before the 6th Paulus Army surrounded by Stalingrad, a distance of 35-40 km remained, but large losses (up to 60% of the motorized infantry and 230 tanks) significantly undermined the offensive potential of the Germans.
Manstein hoped that the surrounded parts of Paulus would hit him, but the lack of fuel and the unavailability of troops forced the command of the 6th Army to abandon the oncoming strike.
At this very moment, Manstein's offensive was interrupted by the successful offensive of the South-Western Front against the army group Holidt and the 8th Italian Army (Operation Maly Saturn). Under the pressure of the Soviet troops, two Italian divisions from Army Group "B" retreated, and the left flank of the Hollidt group was naked. By the end of the day the 7th Romanian Infantry Division had left its positions. Forward detachments of the Red Army came to the crossing through Donets near the town of Kamensk-Shakhtinsky. The first task of the Hollidt Group and the 3rd Romanian Army was now to protect the airfields in Morozovsk and Tatsinskaya, which were extremely necessary for deliveries of the 6th Army, and to keep important crossings through Donets to Forchstadt (White Kalitva) and Kamensk-Shakhtinsky.
Leaving your personal data you agree its processing. Personal data is any information that refers to you as a personal data owner (full name, date of birth, city of residence, contact phone number, e-mail address, occupation etc.) Your consent applies to the implementation of any actions by Stalingrad Front regarding your personal data, which may be requested for collecting, arranging, storing, detailing (updating, changing), processing (for example, sending letters and making calls) etc. under the existing laws. Consent to process your personal data is for an indefinite term, but may be recalled by you (all it takes is your request to Stalingrad Front). Sending Stalingrad Front your personal data you confirm that you are familiar with rights and duties in accordance with "Personal data protection".