Letters of Wehrmacht soldiers from Stalingrad 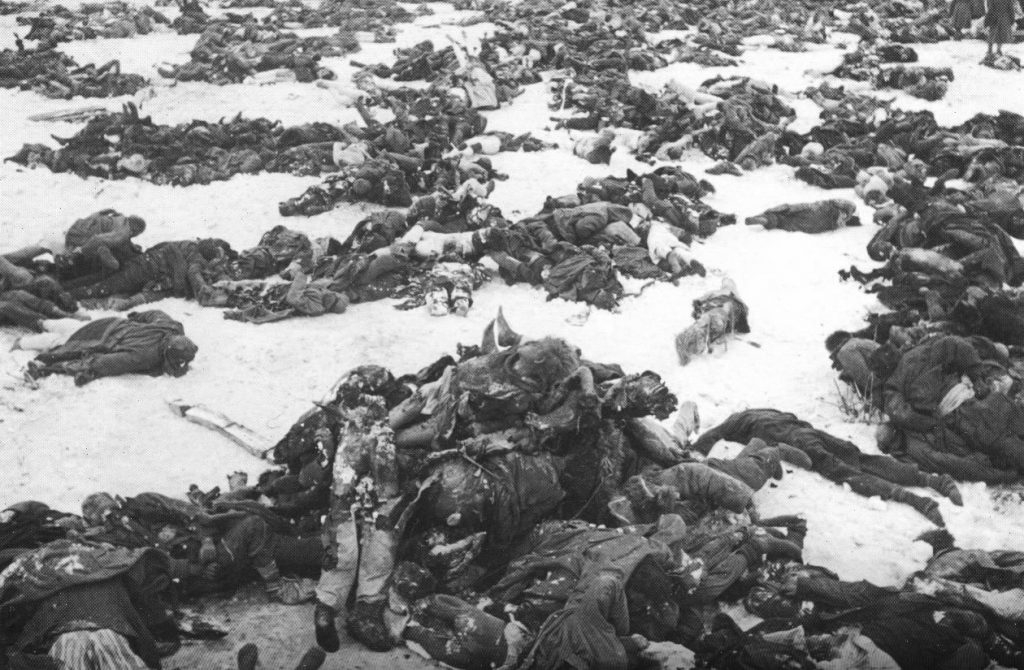 2 Dec. Snow, only snow. Food dirty. We are hungry all the time.
6 Dec. Portions still cut...
8 Dec. Food is becoming dire. One loaf of bread for seven people. Now I have to go to the horses.
12 Dec. Today I found an old piece of moldy bread. It was a real treat. We eat only once, when we distribute food, and then 24 hour fast..."
From the diary of noncommissioned officer Josef Sharfstein, p/n 27547.

22-25 November. Russian tanks pass us and attack from the flank and rear. All are fleeing in panic. We make the 60-mile March through the steppe. We go in a direction on Surovikino. At 11 o'clock, Russian tanks and Katyusha attack us. All run away again.
6 Dec. The weather's getting worse. Clothing freezes on the body. Three days did not eat, did not sleep. Fritz says I overheard them talking: the soldiers prefer to defect or surrender..."
From the diary of field gendarmerie Sergeant Helmut Megenberg.

23 Nov. After lunch we are incredibly fired on Russian planes. It's like nothing we ever felt. And German planes don't seem to see any. Whether it is called air superiority?
24 Nov. After lunch a terrible fire. Our company has lost half its membership. Russian tanks driving around in our positions, planes attack us. We have dead and wounded. It's just indescribable horror..."
From a diary of non-commissioned officer Herman Trapman, 2nd battalion 670 371 infantry regiment-th infantry division.

"...19 Nov. If we lose this war we will avenge all that we did. Thousands of Russian Jews were shot and their wives and children near Kiev and Kharkov. It's just incredible. But that's why we must exert every effort to win the war.
November 24...in the Morning got to Gumrak. There's a real panic. From Stalingrad to move a continuous stream of cars and carts. Home, food and clothes are burned. They say we're surrounded. Around us bombs exploding. Then comes the message that a loaf of bread, was captured by the Germans, again in the hands of the Russian. Against us exposed like 18 divisions. A hung head. Some are already saying that shot... coming Back from the street, we saw parts that were burned the clothes and documents...
12 Dec... Russian planes are made all the more audacious. Firing at us from Aviapark, also dropped bombs. Vogt killed. Who's next?
5 Jan. Our division is a graveyard of Stalingrad, where buried more than 1,000 people. It's just awful. People, now sent from the transport units in the infantry, can be considered sentenced to death.
January 15. Out of the boiler and never will be. From time to time around us, exploding mines..."
From the diary of officer F. P. of the 8th light small-arms Park 212 regiment.

"...15 Jan. Front over the last few days collapsed. All abandoned to their fate. No one knows where his regiment, his company, each left to itself. Supply remains nasty, so the moment of defeat to pull it is impossible.
In the last days is this: we're being attacked six or nine "SB-2" or "Il-2" with two or three fighters. Will not have time to disappear, as come the following and send us your bombs. On each machine two or three things (heavy bomb). This music is heard constantly. Night like should be quieter, but the hum does not stop. These fellows sometimes fly at a height of 50-60 m, our anti-aircraft guns can not be heard. Ammunition expended completely. Well done shoot aviakerosin and sweep our bunkers from the face of the earth.
Driving through Gumrak, I saw a crowd of our retreating soldiers, they are trailing in a variety of uniforms, wound on themselves with various items of clothing just to stay warm. Suddenly one of the soldiers falls into the snow, the other indifferently pass by. No comment!
18 Jan. ...In Gumrak along the road and in the fields, in the dugouts and around the dugouts are dead from hunger, and then frozen German soldiers..."
From the diary of a liaison officer, Lieutenant Gerhard of Rumpling, 96th infantry regiment of the 44th infantry division.

"...Stalingrad is hell on earth, Verdun, red Verdun, with new weapons. We attack daily. If we are able to take in the morning 20 meters in the evening the Russians throw us back..."From a letter of corporal Walter Opperman, p/n 44111, brother 18.XI.1942

"...Equipped with the most modern weapons, Russian deals us severe blows. This is most clearly manifested in the battle of Stalingrad. Here we have in heavy fighting to gain every inch of ground and to make great sacrifices, as Russian fights hard and fiercely, till the last breath..."
From a letter from corporal Otto Bauer, p/n 43396, Herman the Kuga. 18.XI.1942

"...Yes, here we have to thank God for every hour that you stay alive. Here nobody will escape his destiny. The worst thing that you have to meekly wait till your hour. Or sanitary train home or instant and horrible death to the underworld. Only a few, God's chosen lucky people safely survive the war on the battlefront at Stalingrad..."
From the letter of a soldier Paul Bolz Mary Smud. 18.XI.1942

"...Here a living hell. In companies, there are barely 30 people. It's like nothing we ever felt. Unfortunately, I can not write. If fate allows, then I ever talk about it. Stalingrad – the graveyard of the German soldiers. The number of soldiers ' cemeteries is growing..."
From the letter of the chief corporal Josef Cimahi, p/n 27800, parents. 20.XI.1942

"...Yesterday, we got vodka. At this time we just cut the dog, and the vodka was very handy. Hetty, I am in total stabbed to death four dogs, and companions can't eat your fill. I once shot a magpie and cooked it..."
From the letter of soldier Otto Segitiga, 1st company of the 1st battalion of the 227th infantry regiment of the 100th easy-infantry division, p/n 10521, Hetty Kaminskaya. 29.XII.1942