The battle for Stalingrad lasted 200 days and nights, 135 of which were for Mamayev Hill. Mamayev Hill, rising over a central part of the city, was the most important link of the defense system of Stalingrad front, because it let the one who control its height take control not only over the city, but over the Volga crossing as well.

Height 102 is how they marked Mamayev Hill (Russian - Mamayev Kurgan) on military topographic maps. Rivalry for the right to command this height started with the first assault on Stalingrad. On September 14th the Germans managed to find a soft spot in the 62nd Army’s defense and break to Mamayev Hill.

From the memories of the commander of the 62nd Army, Lieutenant-General V.I. Chuikov: “I will never forget the day of September 14th”. On this day the Germans broke into Stalingrad. They already believed that Stalingrad had been captured. The fascists jumped out of the car, played the harmonicas, danced around, scoured around residential districts in order to hanger on something that survived from the fire. However, having come across the fire, they shortened sail”.

The first one to reach Height 102 slope was the 295th Infantry Division, which was a part of the 51st Wehrmacht Army Corps. The first attempts of the Soviet troops to regain the Height be the forces of the 13th Guards Division were rather deficient. But on September 19th, having received two rifle regiments reinforcement, the 95th Infantry Division was able to regain Mamayev Hill by the evening and stand its ground. 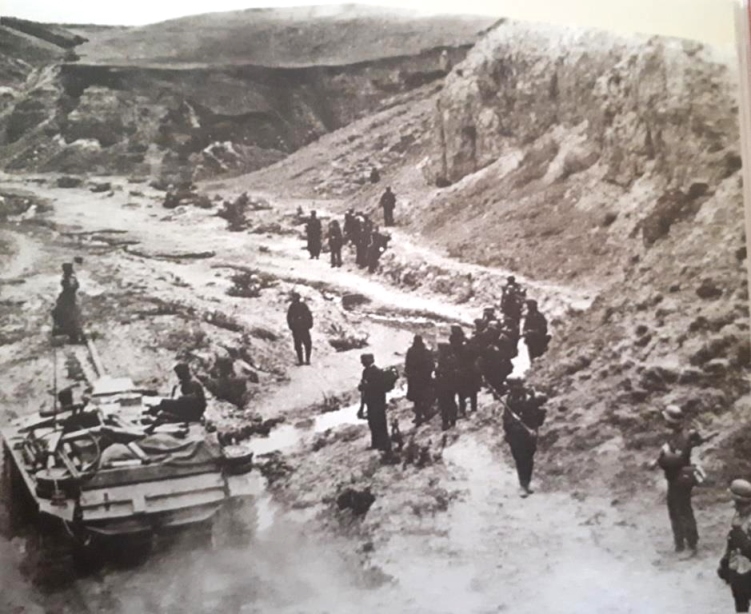 The second assault on Stalingrad started quite successfully for the forces of the 6th Paulus Army. In the north of the city, breaking a path with hurricane gunfire, Wehrmacht approached factory outskirts. However, the 62nd Army under the command of V. I. Chuikov still didn’t give up the positions on Height 102, despite the fact that the enemy strengthened with the 100th chaser troop.

During the third assault on the city Mamayev Hill passed from hand to hand several times. By October 9th the Germans settled down for good on the Height. However, parts of Wehrmacht were strongly exhausted and bleed off, so they couldn’t maintain major offensive operations any longer. Some divisions even started settling their positions in order to survive the winter in Stalingrad. They were sure that Soviet command wasn’t able to conduct an all-out offensive in an effort to defeat German parts in the city. But this opinion was wrong… 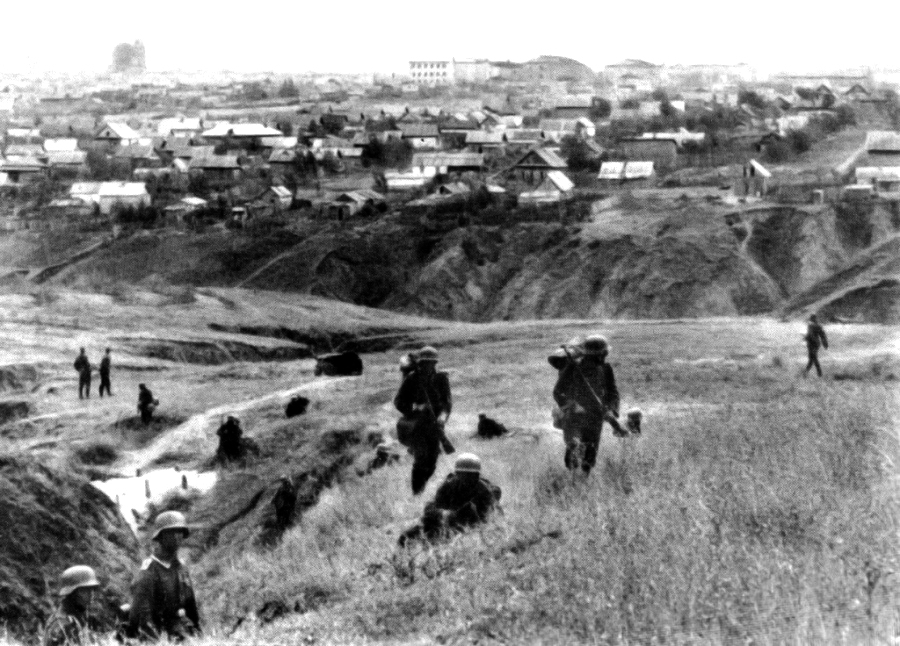 On November 19th 1942 with the forces of South-Western, Don and Stalingrad fronts a Soviet troops strategic offensive operation began to encircle and destroy enemy troops in the district of Stalingrad city. On November 23rd Stalingrad pocket closed, the 6th Army turned out to be encircled. On Height 102 as well as in the other parts of front, the situation in the encirclement became worse and worse every day. Wehrmacht military men died not so much from the enemy fire as from sickness, hunger and supercooling.

There’s an opinion that right in the district of Mamayev Hill in one of pits a German military doctor Kurt Reuber draw his famous picture Stalingrad Madonna on the night of December 24th to 25th. 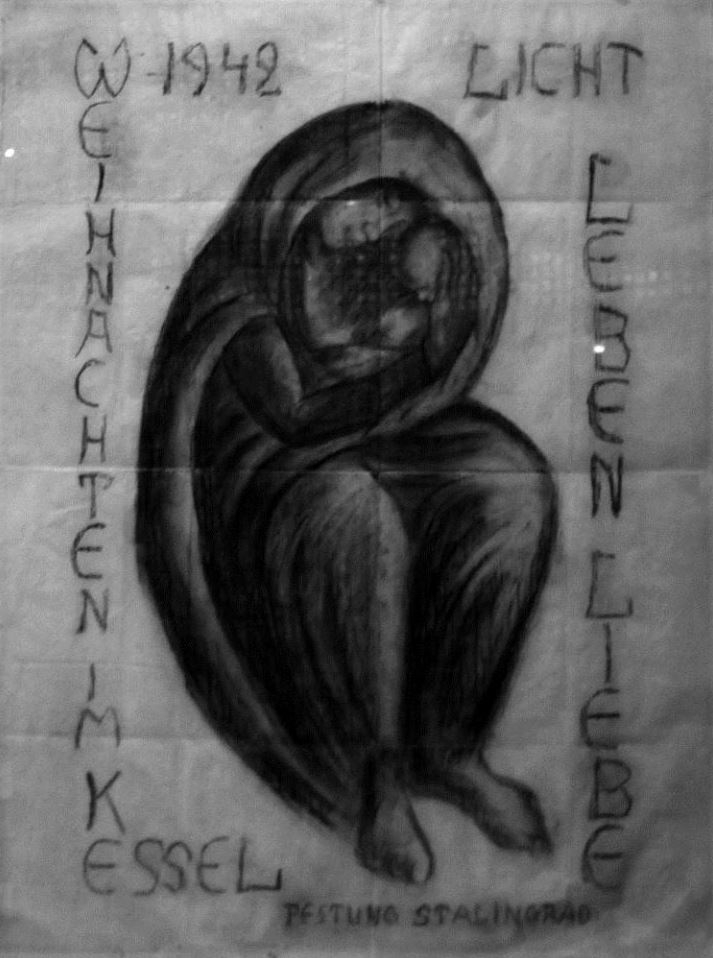 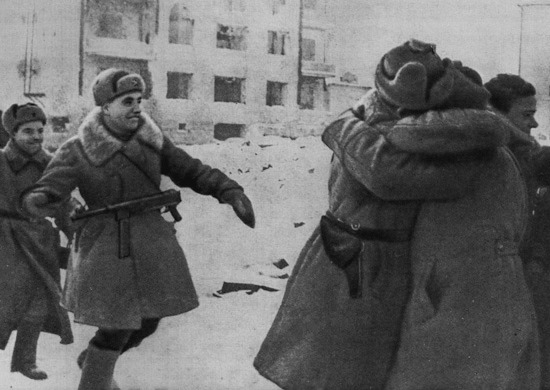 Soldiers of the 62nd and 21st Armies united in Stalingrad meeting

Mamayev Hill after the end of Stalingrad battle

After the end of the battle Mamayev Kurgan  slopes were dug out with pits and trenches, the land was dug up with bombs and mines. Surroundings were covered by the mux of bodies, military equipment, weapons. The density of fire here was colossal: there were from 500 to 1250 bullets and fragments for one square meter. Even several years after the end of the war the grass on Mamayev Hill didn’t grow.

Height 102 is a big communal grave, the first dumpings were made during the war. According to an approximate calculation, more than 34 000 people were buried here. 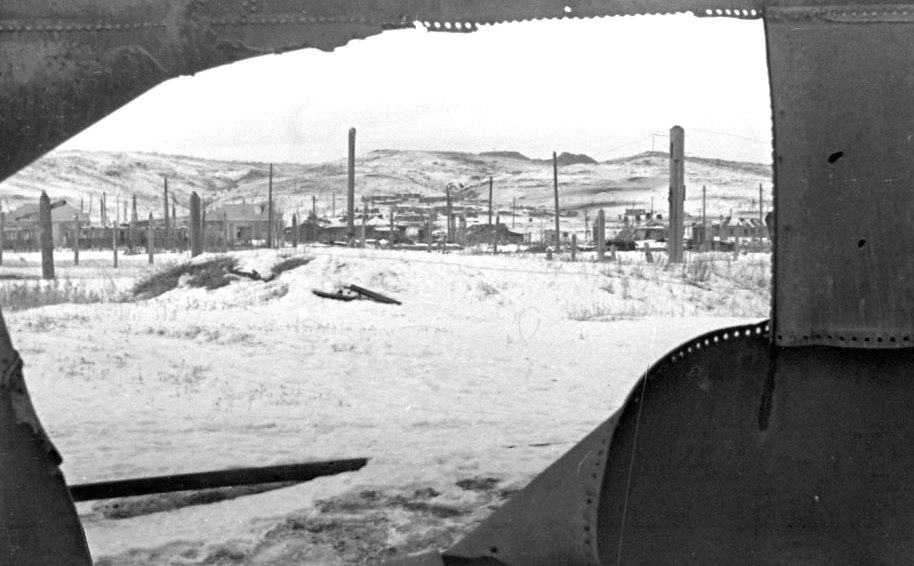 View on Mamayev Hill after the battle. December 1942.

Mamayev Hill after the end of the battles

In May 1959, under the supervision of a sculptor E. V. Vuchetich, a construction of the Memorial “To the Heroes of the Battle of Stalingrad” started in this memorable for every citizen of Stalingrad place, and already on October 15th in 1967 was its formal opening. 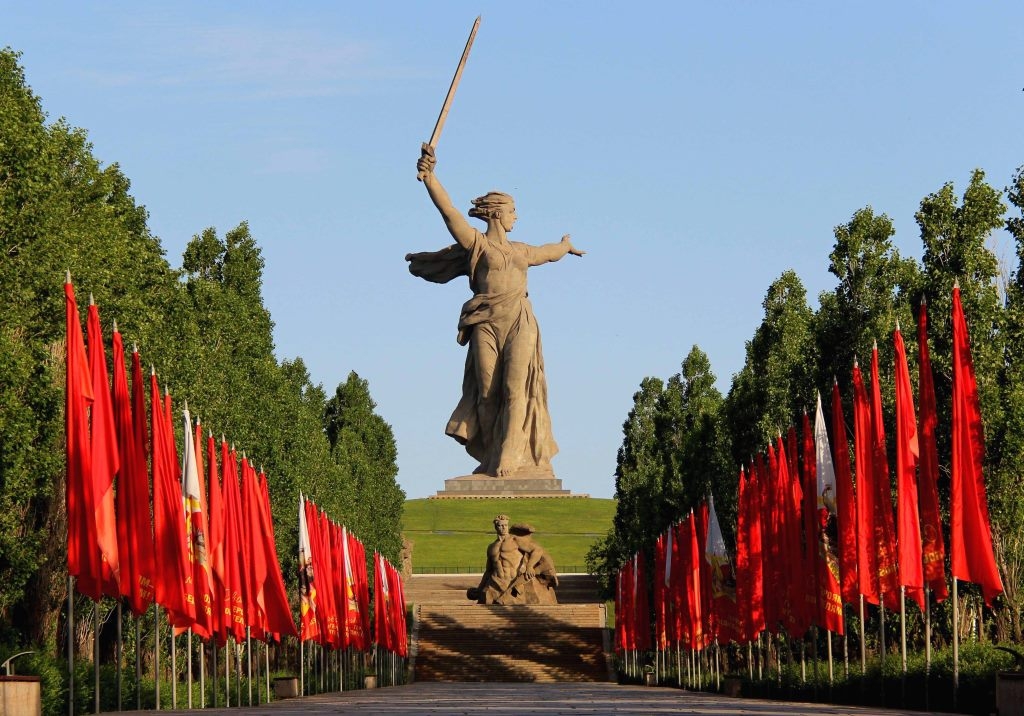 It is interesting that on May 9th,1970, a capsule with participants of the war calling to future generations was built in, and it’s supposed to be opened on May 9th, 2045, on the 100th anniversary of the Great Patriotic War victory. 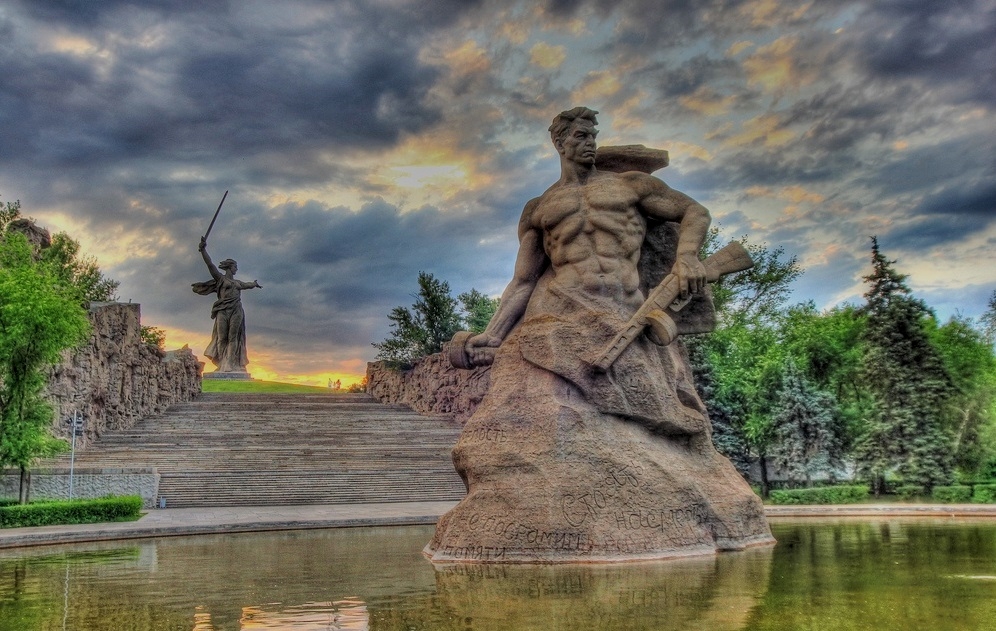 This monument- a soldier with a rifle and a grenade and a sign on the base “Stand to the death” has a face of a Soviet Union Marshal Vasily Ivanovich Chuikov, a commander of the 62nd Army, which faced an attack of the Germans on Stalingrad city. 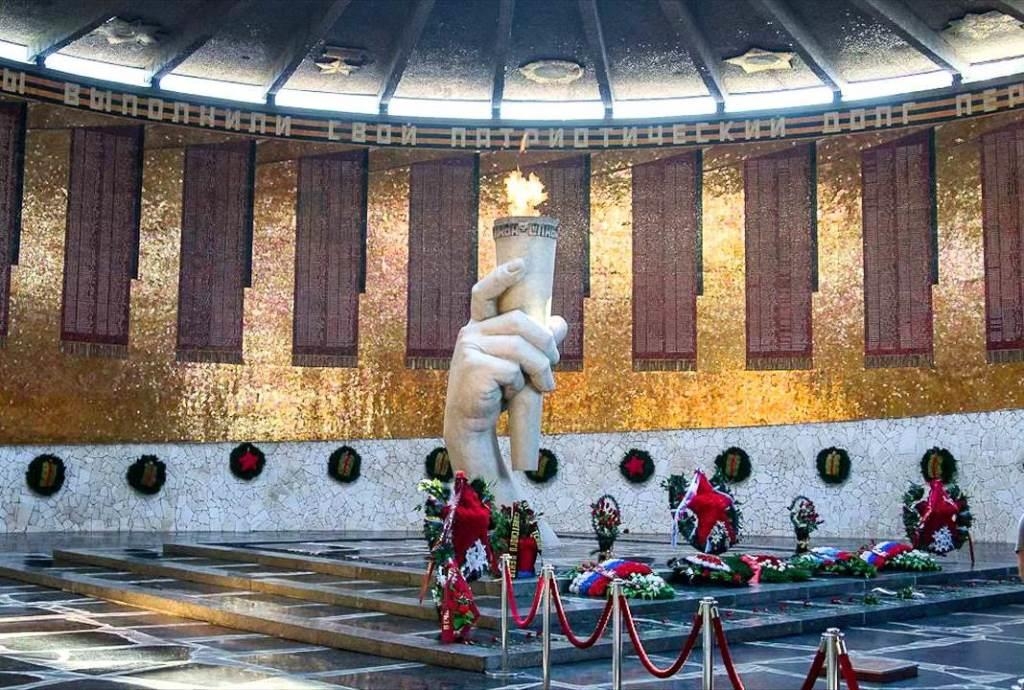 Now Mamayev Hill is not only the main sightseeing of Volgograd city (by the year of 1961 it was Stalingrad), but also the dominant height of Russia.

The area of an undeveloped territory of this historical place today is about 3 square kilometers. Sometimes official diggings are held here with the permission of city authorities, but the last time they were held in 2013. Of course, now it’s forbidden to dig in this place without a special permission, and all findings here were made a very long time ago in a small amount, so they are high in price. However, sometimes findings can be accidental… 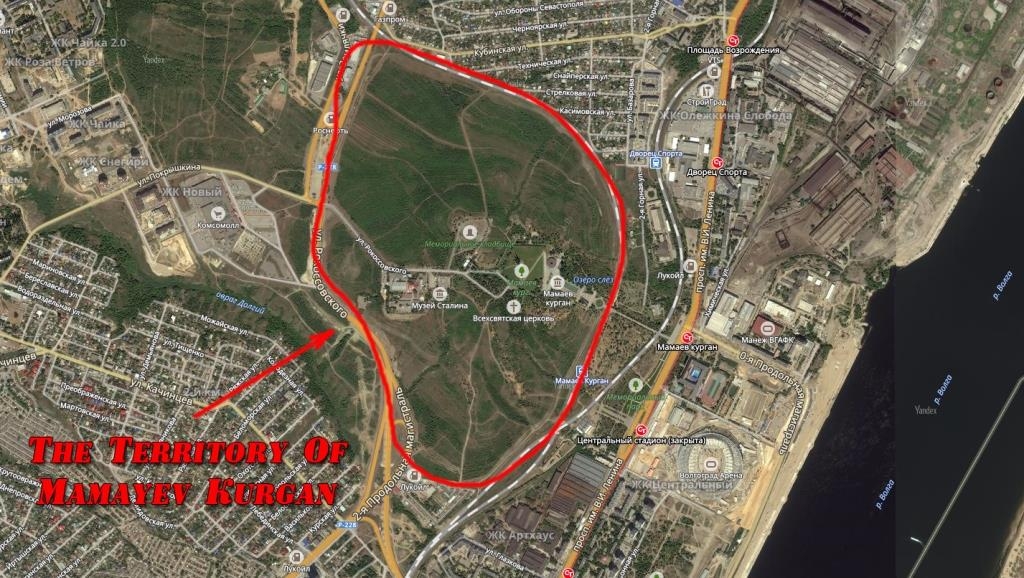 So, for examples, in preparation for the World Cup in Russia, construction works were held next to Mamayev Kurgan, not far away from a football stadium “Volgograd Arena”. During land works on the depth of 1 meter they found a German steel helmet M40, which wore well. Unfortunately, there are no pictures from that event, but there are photos, made in 2013, during diggings on Height 102. According to a digger, on that day his group and he found 3 German helmets on the north-western slope of Mamayev Hill and several 1st class iron crosses.

On of helmets found on Mamayev Hill, 2013 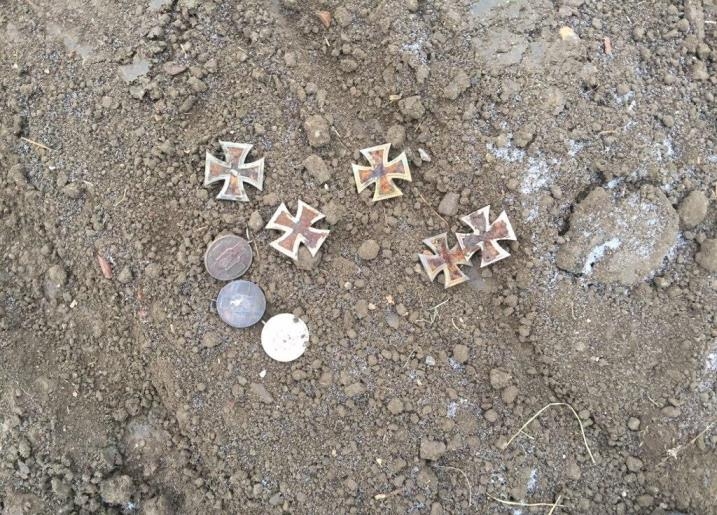 Today Mamayev Hill is a hotspot and located almost in the very center of Volgograd city, but despite this fact, you can say for sure that depths of this place, soaked in blood, keep a lot of relics, and maybe even remains of Stalingrad battle participants, that need to be reburied. 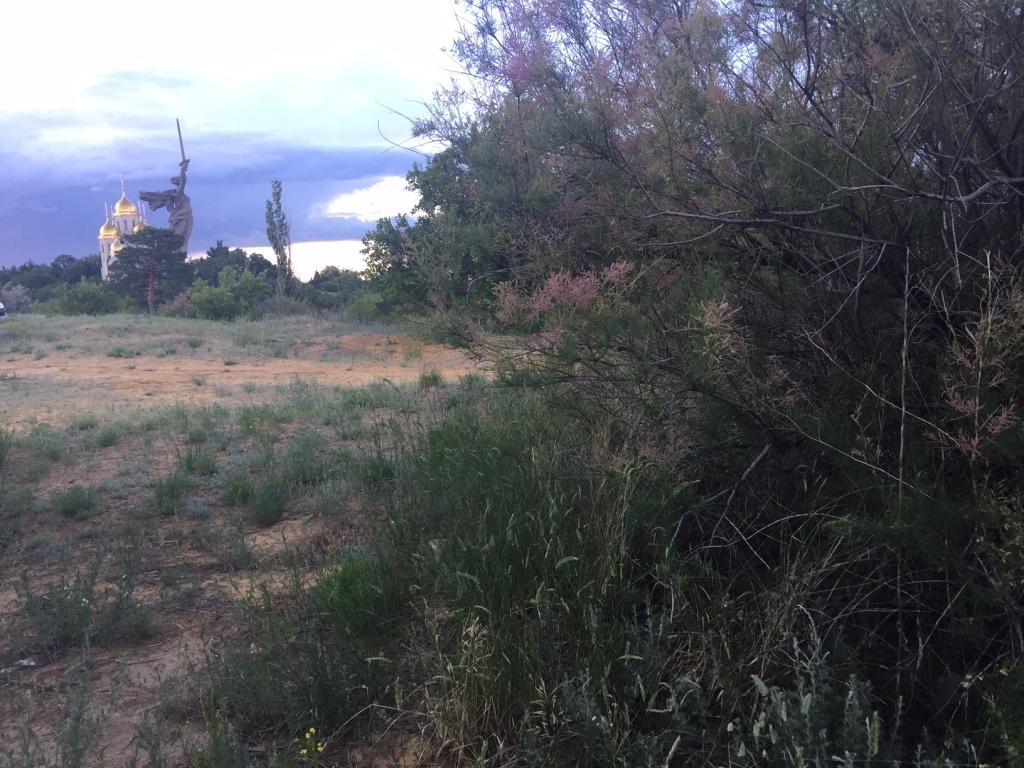 Mamayev Hill from an unusual perspective