Rossoshka is a military memorial cemetery of the battle of Stalingrad

The village of Rossoshka and the surroundings is a land soaked in blood, which saw scads of crippled fates. In 1942, there was a Soviet prison camp, and in 1943 there was a cemetery for German servicemen here. Now we have here a large military memorial cemetery for the soldiers of both the once opposing parties...

The village of Rossoshka is named after two already existing villages of Little Rossoshka and Big Rossoshka, which were completely destroyed when the 6th Army entered Stalingrad. The village is situated in about 20 kilometers (length) from the western outskirts of Volgograd (formerly known as Stalingrad).

The villages of Big and Little Rossoshka were first mentioned in operative reports in August 1942. In mid-August, the Sixth Army launched a large-scale offensive on Stalingrad. The German command planned to capture the city by the 25th. On August 23, the Wehrmacht's troops of the 35th Division and the 169th Tank Brigade counterattacked from the area of the village of Samofalovka. Their main target was to break the Soviet defense in order to connect with units of the 14th Panzer Corps, which broke through to the Volga river and got cut off from the main forces. During the offensive, the German units reached Big Rossoshka, where the 87th Infantry Division of the 62nd Army commanded by Lieutenant Shmelev tracked the situation at height 77.6.

Within two days (August 23 and 24), the area of defense of the 87th Infantry Division was repeatedly attacked by Luftwaffe aviation and artillery fire. The people were killed and wounded. During a brief lull, the wounded managed to be evacuated, but the Red Army soldiers knew that was temporary and the enemy would start an offensive soon. At that time the group included 6 signalmen, 15 scouts and 12 gunmen - 33 people only.

A group of soldiers and commanders of the 1379th Infantry Regiment of the 87th Infantry Division of the 62nd Army, who repelled the German offensive near the village of Little Rossoshka on August 24, 1942

After bombing in the vicinity of the village of Big Rossoshka, the survived defenders started preparations for the forthcoming fight. All of them were sure that it would be their last battle. The soldiers deepened the trenches, strengthened and covered them up. The amount of weapons and ammunition was limited: petrol bombs, grenades, assault rifles, bolt action rifles and only a few armor-piercing guns. 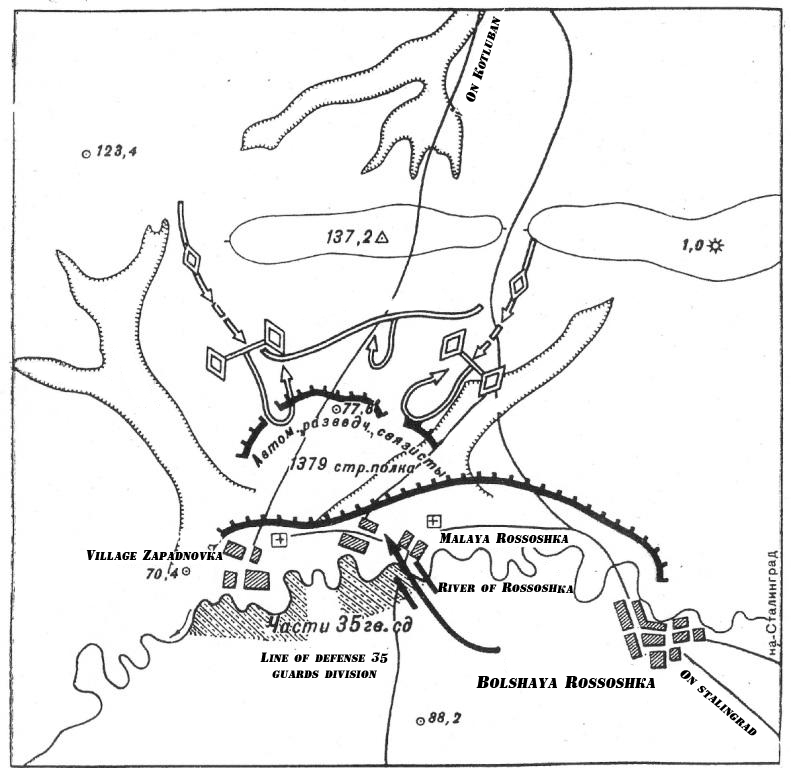 On August 24, at sunset German tanks approached the height of 77.6. There were about 70 of them, followed by an infantry battalion. An unequal battle started, allowing the German tanks to come closer, the Soviet soldiers opened fire on them with a few anti-tank guns. They quickly managed to beat several tanks, but many were still able to break right into the defenders` trenches. Then the German tankmen tried to cover more ground by active maneuvering. But this tactic did not bring success, because the day before, the trenches were deepened and well-fortified. In counterattacks, the Soviet soldiers began throwing petrol bombs into tanks that came close. The tankmen jumped out of the burning tanks, but they were shot immediately with rifles and machine guns.
A few hours later, when the defenders were almost out of ammunition the enemy tanks turned around rapidly. The battle resulted in 27 German tanks destroyed and 150 soldiers were killed, amongst the dead were some officers too. Surprisingly the defenders had no casualties. Two days later the soldiers of the 87th Infantry Division had to back down from their defensive positions in Stalingrad because of the lack of food and drinking water. For the feat implemented, the battle participants were awarded orders and medals.
This victory near the village of Big Rossoshka meant Paulus's army couldn't breakthrough into Stalingrad for a week.

Occupation and liberation of Rossoshka

By the end of August, the German invaders had already controlled neighborhoods of the villages Big and Little Rossoshka. They organized a camp for Soviet prisoners here. For a long time this place gave the Germans the advantage with durable defences and an airfield in the village. This airfield did not have the capacity like Pitomnik and Gumrak airfields; nevertheless, it was an important strategic point. The Germans felt relatively safe here before the Soviet Army counter-offensive and the 6th Army isolated them near Stalingrad. 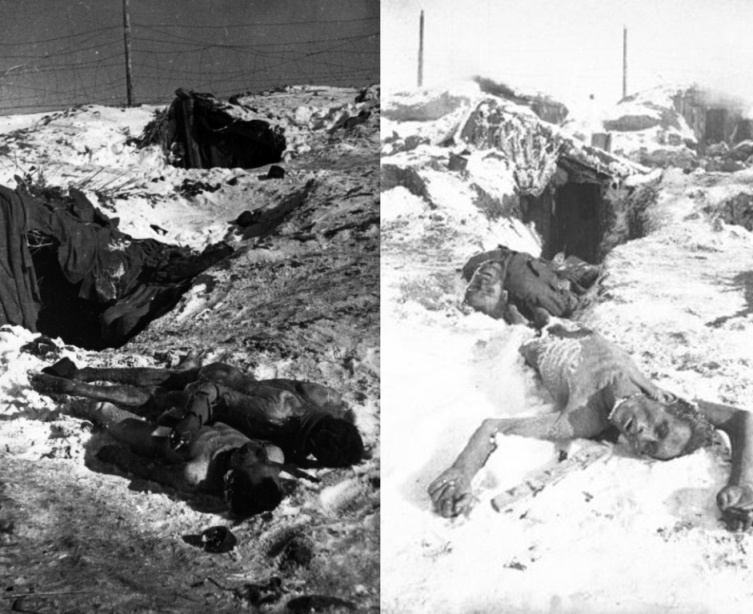 The Red Army soldiers died of starvation and very cold temperatures. The prison camp was in the village of Big Rossoshka near Stalingrad. The photograph was taken during a survey of the camp by the Soviet military after frustration of the German troops

The Germans were faced with the same challenges like the Soviets in the Rossoshka-Zapadnovka sector, a shortage of food, water, winter uniforms and ammunition etc. By January 13, in the western sector, Soviet troops approached the Rossoshka River. By January 15, in the battle for Marinovka-Rossoshka outpost, the German command lost up to 6,000 men when fighting and started withdrawing troops from occupied lines. But in two days, having collected all the reserves, backing and disassembled rear units, the German command tried once again to stop the Red Army offensive on the Peschanka line, Gonchar farm, Big Rossoshka, but that attempt failed too. Hammer blows of our units finally knocked out the German troops from that line.

Every day Soviet troops took thousands of prisoners and vehicles, hundreds of guns and a large number of aircraft. So for example, up to 250 aircraft were seized at Big Rossoshka Airfield. Hundreds of frozen German soldiers lay on the roads.

Diggings in the area of Rossoshka village

Until now, defensive trenches and dugouts used by both parties in the battle for the village of Rossoshka have survived, you can clearly see them on Google maps. And we have the opportunity to personally visit these places, this is what we want to show you. 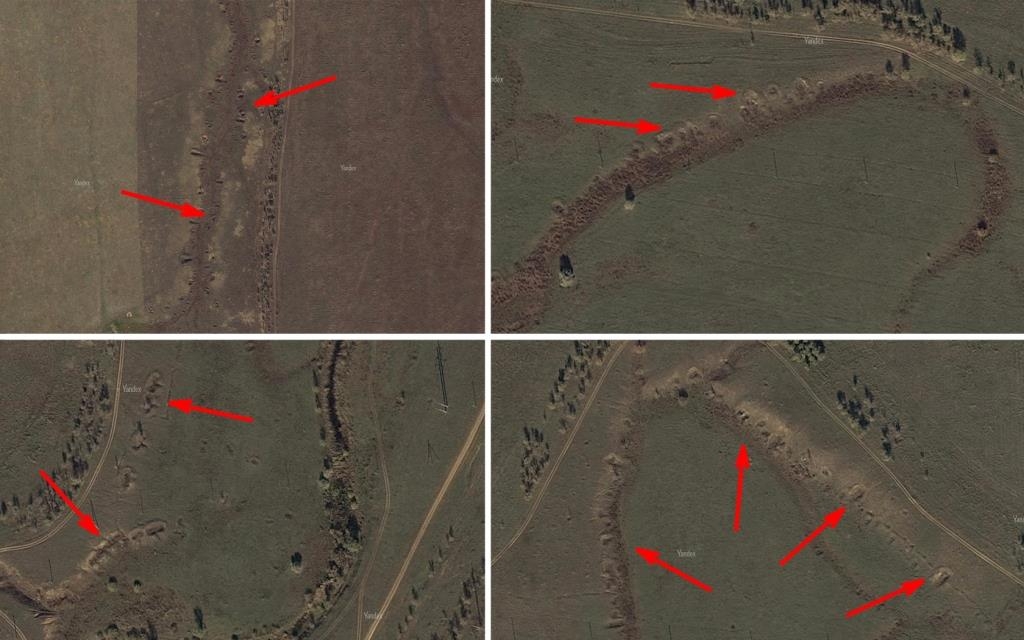 Images of trenches and dugouts surrounding the village of Rossoshka. The arrows point out the areas that are visible to this day.

As in other places of Volgograd region, we mostly carry out digging in Arroyos and ravines, as well as the outskirts of Rossoshka village. It was in the Arroyos, where the surrounded Germans struggled to survive, setting up a large number of tents. That is why something interesting is often found at the bottom of the Arroyos.

On the 2nd of January, 2018, we dug to the south of Rossoshka village and found a knife-bayonet with a scabbard from the Mauser 98k rifle and the cartridges. 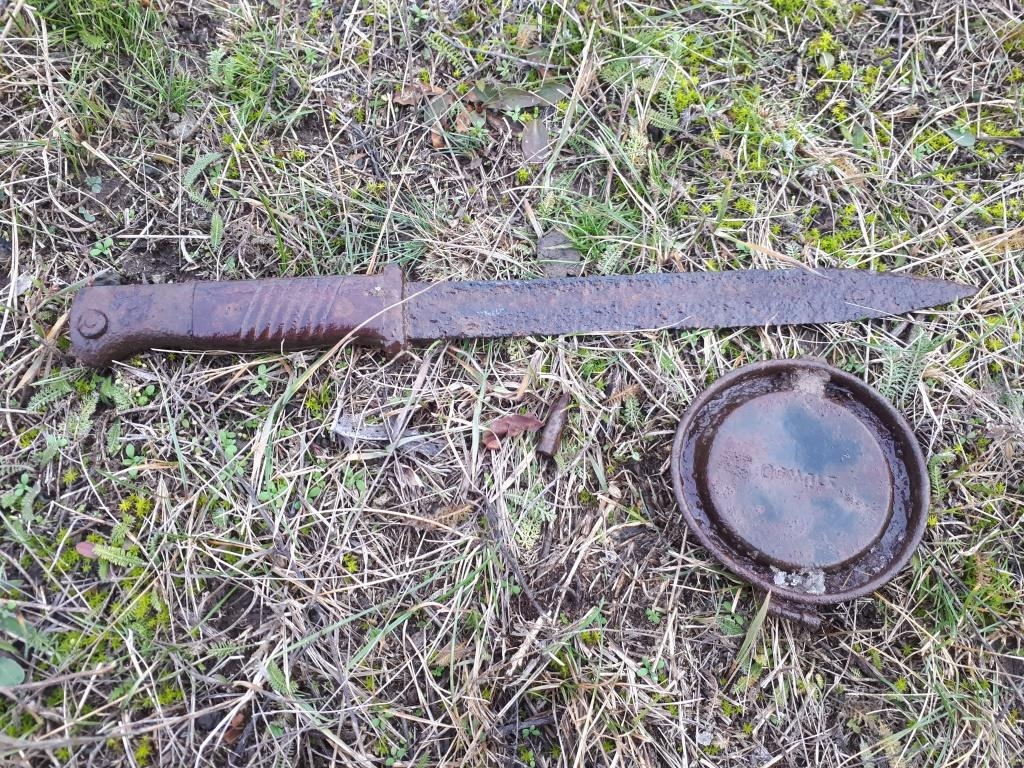 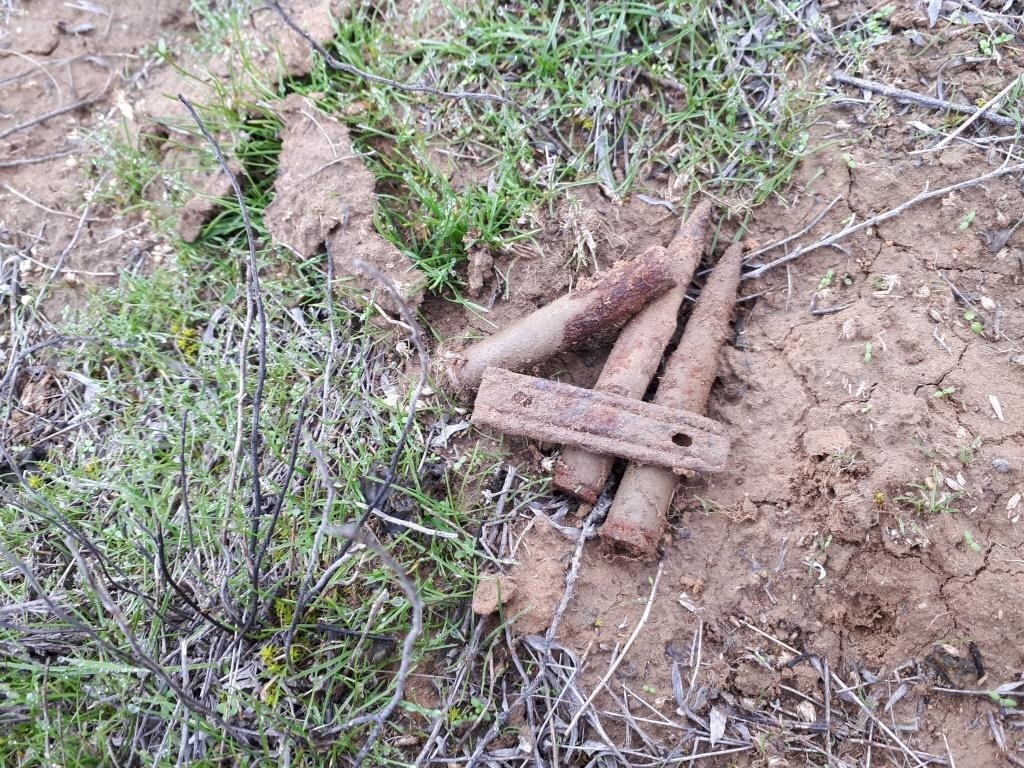 Cartridges and clips to Mauser 98k 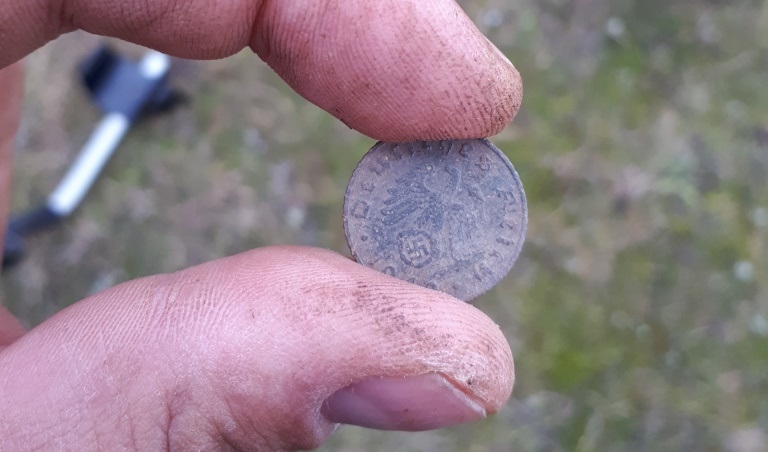 Coin 3 Reich - was found in a field In Rossoshka

Stepping out on a flat site, I found a bolt from the same Mauser 98k rifle. I want to remind you that Russian law prohibits sale of weapons, spare parts and ammunition, so our store does not offer these findings on sale. 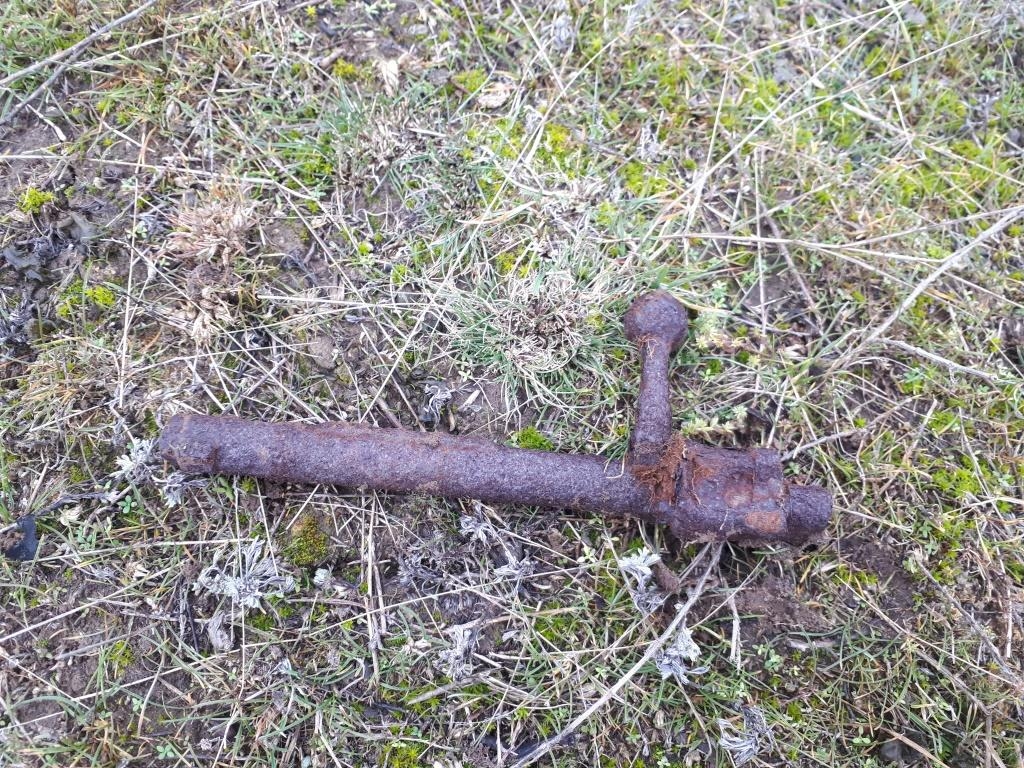 I want to highlight a strange feature: in the area of Rossoshka village, 80% of all cartridges and cartridges found are designed for already mentioned Mauser rifle. I do not know how to explain the fact that in this area the Germans were armed primarily with this weapon, but that is it. On the same day there were 2 more interesting findings: A well preserved Black Wound Badge and Badge Luftschutz-Ehrenzeichen. 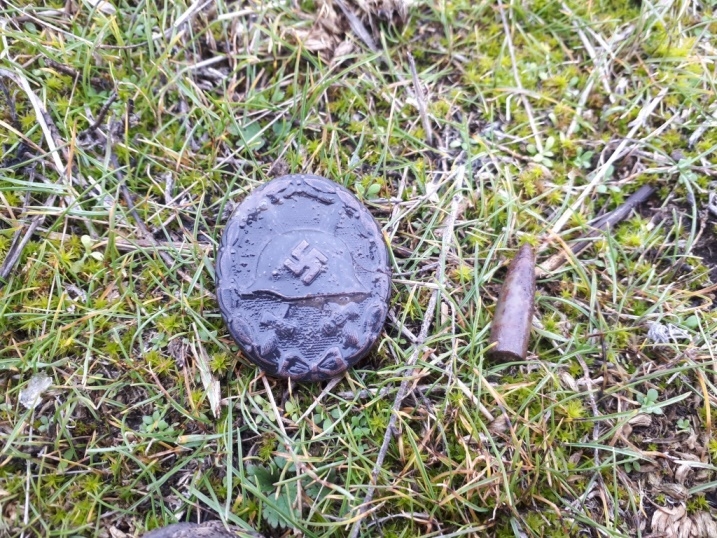 Wound Badge found at the south of Rossoshka village 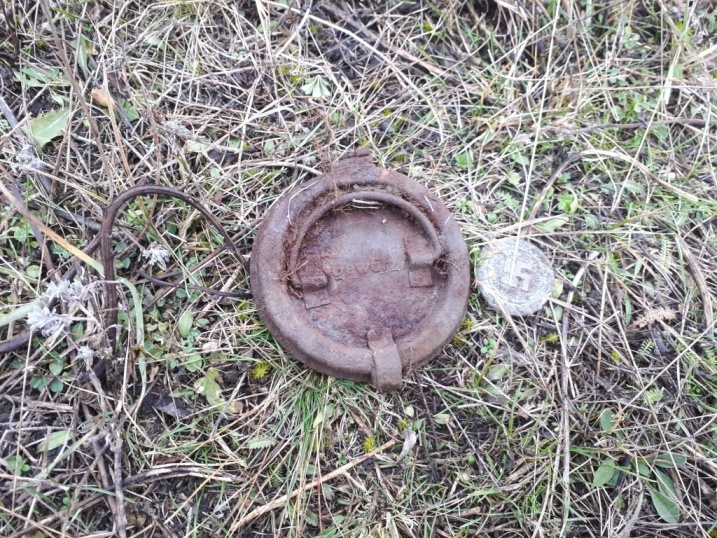 In recent years, we rarely dug in the village of Rossoshka, but earlier we often found German helmets and various badges here, I hope in 2018 we will have more time for digging in these places. In addition, I want to say that all the remains of those killed during World War II operations in the Volgograd and Rostov regions are reburied at the memorial cemetery in Rossoshka. 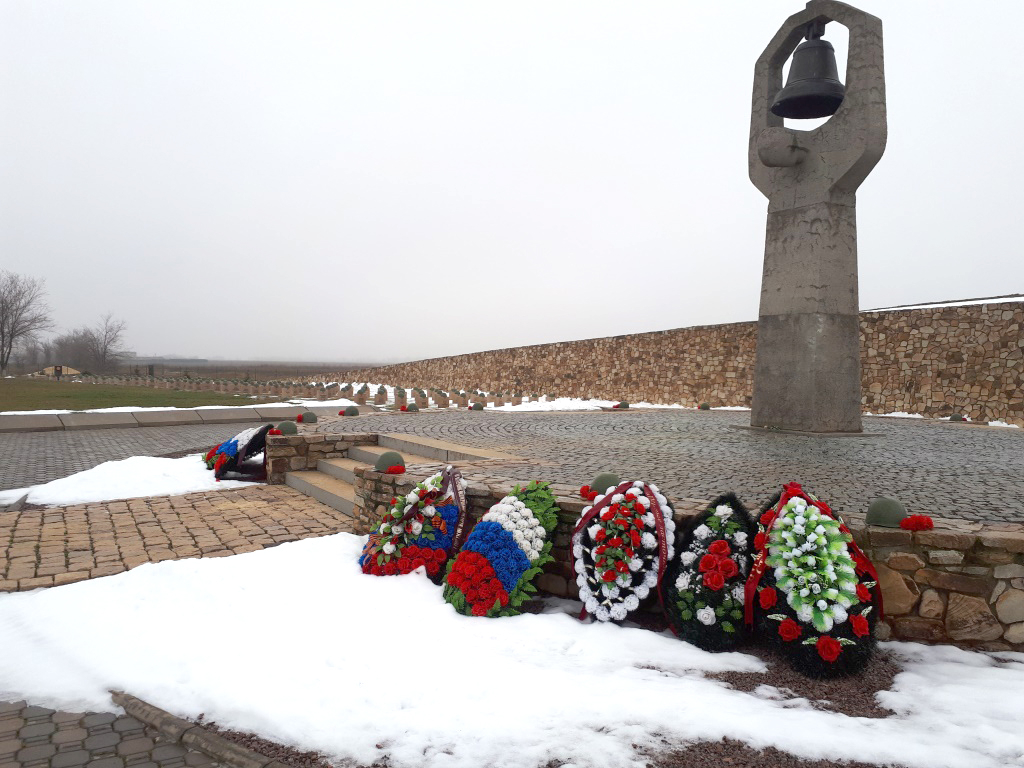 Soviet part of the cemetery 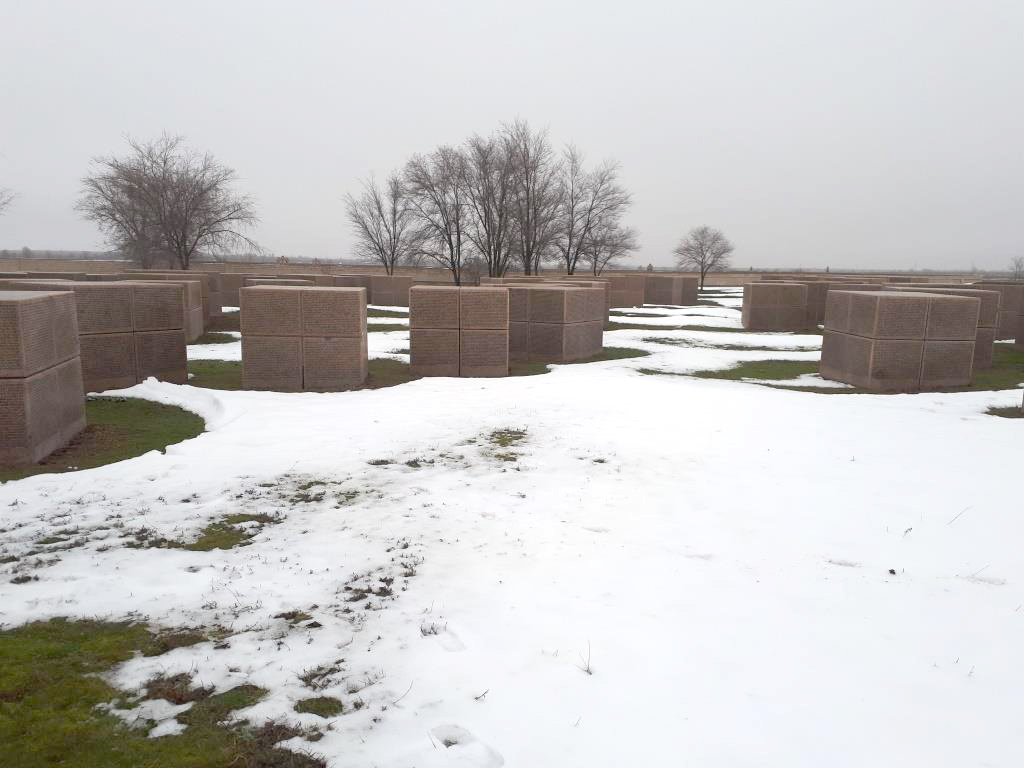 German part of the cemetery

After signing an intergovernmental agreement between the Russian Federation and Germany on the care/maintenance of military tombs in December 1992, the German People's Union for the care/maintenance of military tombs built here a common cemetery for the burial of soldiers killed during the battle for Stalingrad on behalf of the Government of the Federal Republic of Germany in 1995. On May 15, 1999, the military memorial cemetery was opened in Rossoshka. The maintenance and care of this cemetery is paid by donations of German charity funds. 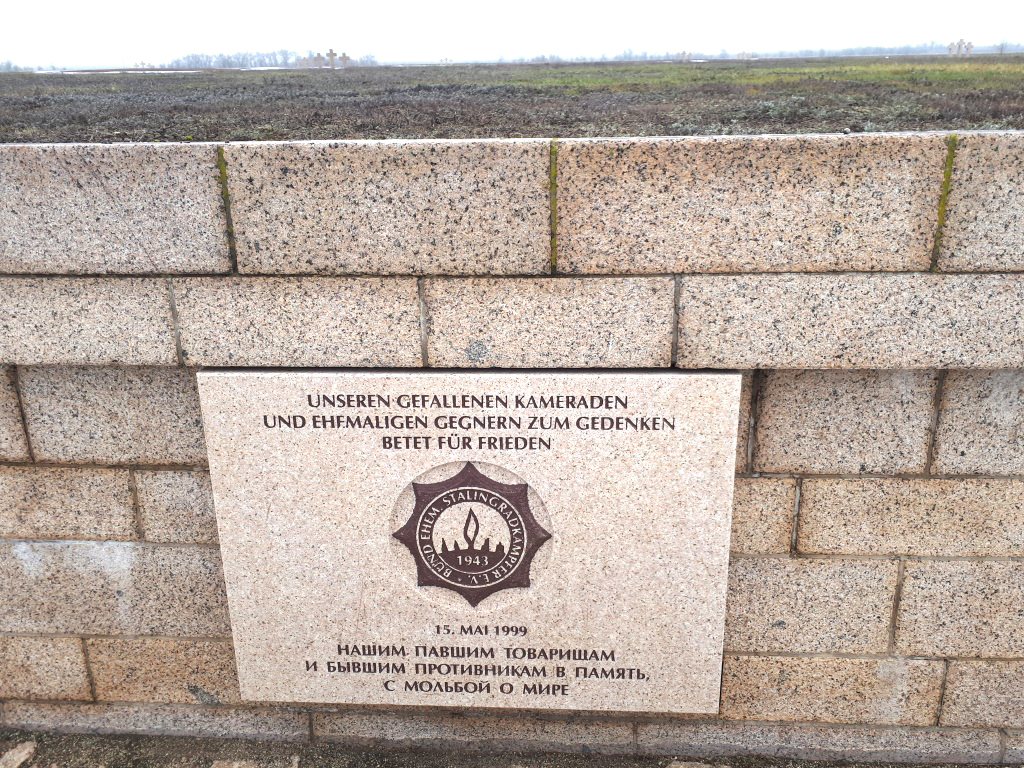 A memorial plate on the German side of the cemetery with the inscription in German and Russian: "To Our Fallen Comrades and Former Foes in Memory of the Prayer for Peace"

The first burials were carried out in 1993. By the end of 2005, more than 48,000 people had been transferred from hundreds of different graves located in the Volgograd and Rostov-on-Don regions and buried here. The names of 120,000 dead and missing can be found engraved to plates made of natural stone. 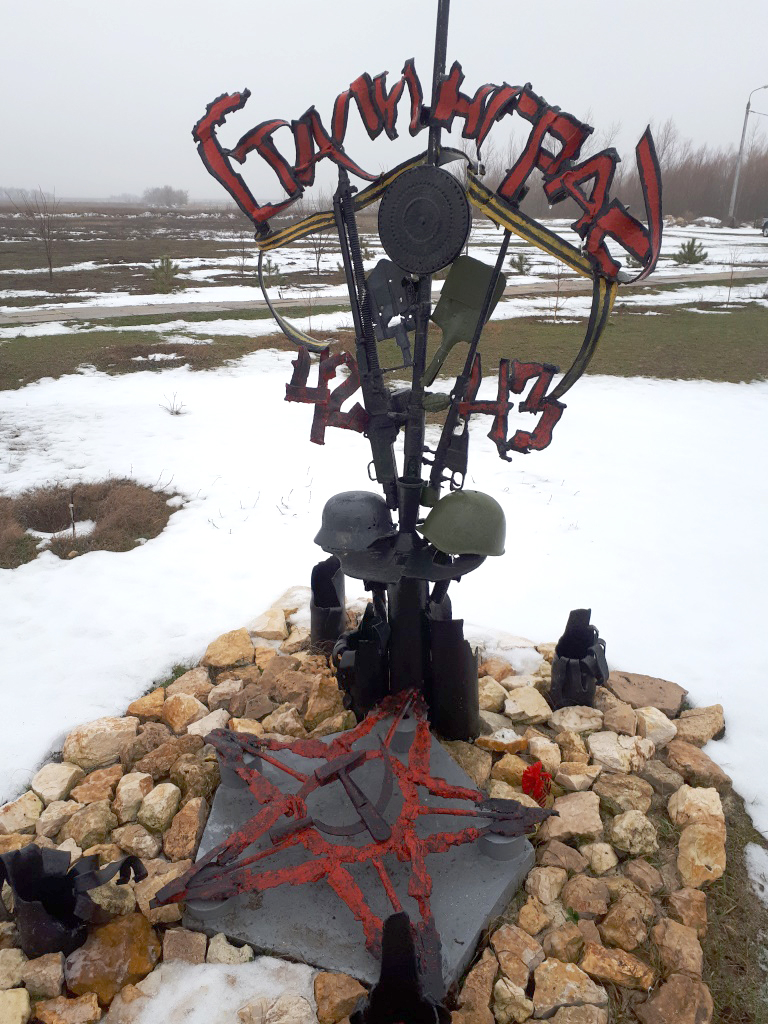 A small monument to Soviet and German soldiers