The main German helmets of the World War 2

The history of Nazy Germany is only 12 years, probably that’s why Deutsches Reich military relics are in so popular among collectors all over the world. In this article we will talk about German helmets of the WW2 period.

Model M16, as its marking says, started being produced in the 3rd Reich in 1916 and was actively used by the Germans in WW1. M16 was made of a solid steel sheet with a forged method. M16 has a recognizable form - it has a large peak and a neck- flap, also there were so called “horns” on the side of the helmet, whoch served for ventilation and fixing a protective armor plate. A headrest plate weighted 2,5 kilos and was 4 mm thick. The plate provided bullet-proof of the forehead of  a soldier from a distance of 50 meters, but due to its heavy weight it was rarely used, It was attached to a helmet by a leather sling. Stahlhelm M16 had a thick leather helmet liner, consisting of three segments and attaching to a helmet with a leather band.

M16 with a headrest plate

In 1917, an M17 model appeared. Due to the lack of leather supply a helmet liner was attached to  with a metal band. In 1918 German industry began to produce a helmet with an M18 marking. Like M17, a new modification wasn’t very different from its predecessor, except for a clearer passing from a dome to a back skirt. Due to the fact that a helmet almost completely covered soldier’s ears, the latest complaned about low audibility while wearing a helmet. So in 1918 a small edition of M18 helmets with edges cut out for the ears were produced. M16 model production ceased long before the WW2 began, however sometimes while digging in Stalingrad our team finds M16 and M18 models, which means that some German soldiers prefered old versions of “Shahlhelm” at the battle.

In the 1930s the nature of the war changed, also the role of modern foot troops changed - they became more mobile. So the requirements to a protective equipment changed as well. Now a steel helmet had to be less overall, but along with this it had to protect a soldier not only from a shrapnel, but also from bigger and heavier fragments, pistol bullets, jabs, butt stroke and buildings fragments. Then German constructors who designed an M16 created a modification with an M35 abbreviation.

This helmet became more compact (a peak and neck-flap became smaller) and more solid, now it could hold pressure up to 220 kg per мм2.  Such helmet was made of high-quality alloy carbon steel on a press with addition of molly. A steel sheet was 1 - 1,5 mm thick. It weighted around 1300 g.

A helmet liner consisted of eight (sometimes nine) tongues of calf skin, which made its wearing more comfortable. For example, in Soviet helmets of those times they used faux leather, which rubbed solders’ heads. A liner and a chinstrap were attached to an aluminum band, which were attached to the helmet with 3 clasps. A decal with German tricolor was applied on the right side of a model M35 (on a German helmet SS there was a decal - a party shield of Deutsches Reich- attached). A decal Kriegsmarine, Wehrmacht, Polizei, SS or Luftwaffe was applied on the left side. However, since 1940 only one decal was applied on the left side of an M35 modification for the purpose of masking. 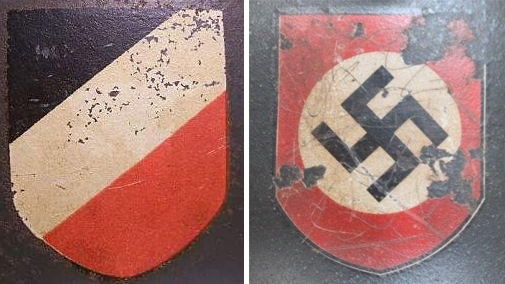 Decal versions on the left side side - Kriegsmarine, Wehrmacht, Polizei, SS, Luftwaffe

As a matter of fact, there were much more decal versions (Sturmabteilung, Hitler Jugend, Afrika Korps, LandesPolizei, Medic DRK, Blue Division and others), but we will certainly talk about it in another article.

By the beginning of the WW2 a German Stahlhelm M35 was considered the best one in the world. It is worth noting that for the first two years after an M35 helmet was accepted for service, they produced 1 400 000 pieces of all sizes and about 1 000 000 pieces by the year of 1940, when an M35 model was replaced by M40.

In 1940 an M35 model was updated and got the name M40. The main difference was the use of a cheaper manganese instead of molly as an alloy addition, which impaired steel properties a little. To cheapen the process of production, ventilation holes were stamped, not made of separate details (as it was in M35). As a rule, a decal in an M40 was on the left side of the helmet (corps identity), but sometimes you may see helmets with two decals or without them at all.

In 1942 due to Deutsches Reich's military and economic position in the WW2 constructors have to take steps to make steel helmets production cheaper. The country extremely lacked strategic raw materials for tanks production, so it was not a surprise that steel quality in new M42 got much worse. Steel became softer, because they had to give up adding alloy additions. Also to cheapen the production, helmet edges were not beaded inside (as it was with models M35 and M40), but they were flanged.

How to distinguish German helmets M35, M40 and M42 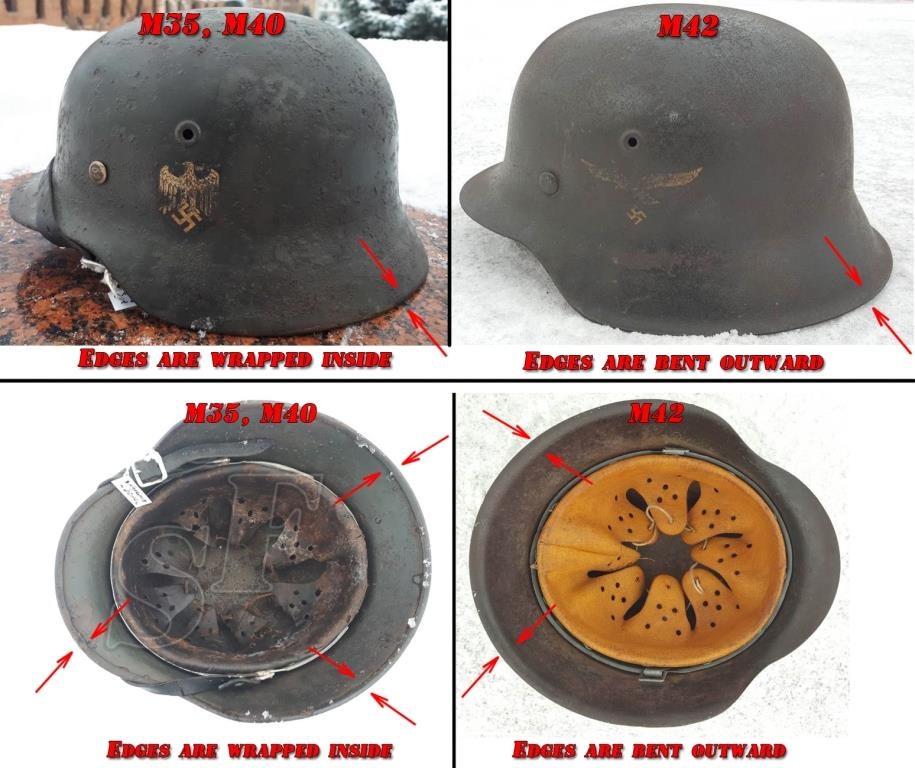 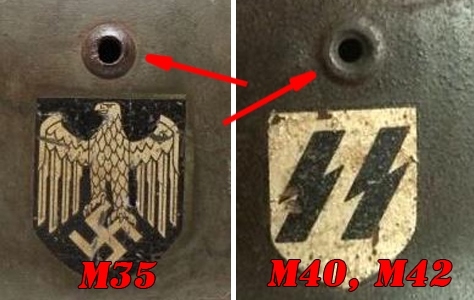 German paratrooper helmet and its varieties are probably the rarest and most expensive helmet of the Third Reich. This model for parachute units of Luftwaffe was released in 1936. It represented M35, which almost completely lacked a peak and a back skirt for ¾. An M36 model was obtained by cutting M35 helmet flaps. It had additional cut-outs for a quick-detach chinstrap, which was used when wearing helmets in the field. It was painted in grey color and had two decals on the sides. On the left side it was an emblem Liftwaffe, and a German tricolor on the right side. 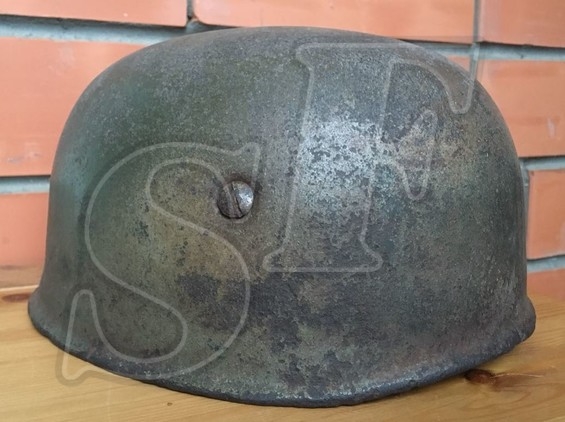 On these Stahlhelm they used a liner sample of 1931, which was attached with three buttons. However, there were times when jumping from the plane a trooper’s helmet came off a liner, and he landed in one single liner. It made Germans update both a helmet and a liner in 1937. They removed a cut-out from the helmet for wearing it in the field, now there were 4 holes for screws instead of 3 button liner bracings, and the screws themselves had ventilation holes. It’s interesting that according to a Luftwaffe instruction of March 15th, 1938, helmet’s life-time was limited to 15 years.

This article represents the main helmets used by the Third Reich in the WW2. However, these are not all helmets produced in Nazi Germany. For example, this article doesn’t mention Luftschutz and M34 (Fire Service helmet). If after reading this article you are interested in purchasing a Helmet of the 3rd Reich, there’ s a wide choice of these helmets in our store - German Helmets of World War 2.