Nibelungenwerke Plant. The production of tanks in the 3 Reich

Austrian St. Valentine is a small farming village whose population did not exceed 2,000 inhabitants by the beginning of the war. It was here that the Nibelungenwerke factory was located, which created almost 5,000 German tanks and self-propelled guns. Initially, the factory in St. Valentine was engaged in the repair and modernization of medium tanks Pz.Kpfw III. 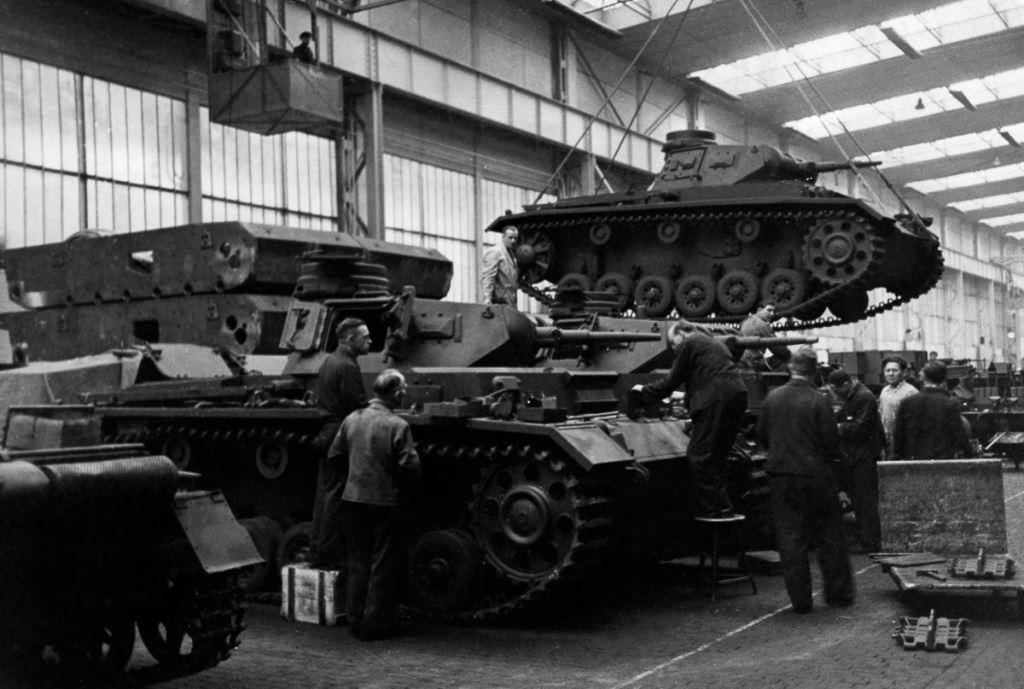 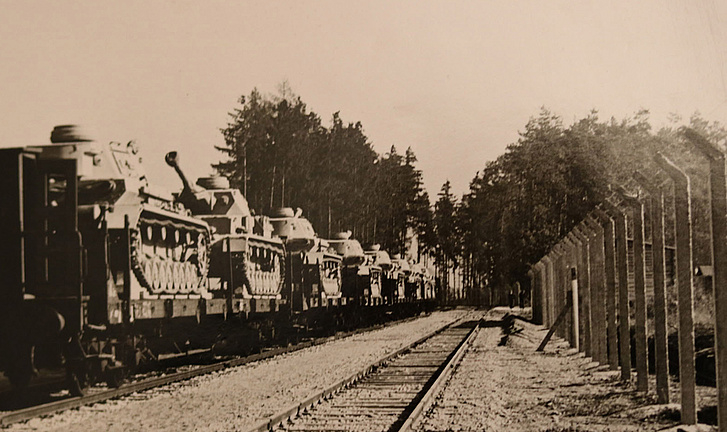 "Nibelungenverke" consisted of nine workshops, each of which approached the railway line, next to which there was a platform for sea trials of machines. With the beginning of the war, the trains with tanks began not only to decrease, but also to arrive - for repairs and modernization. 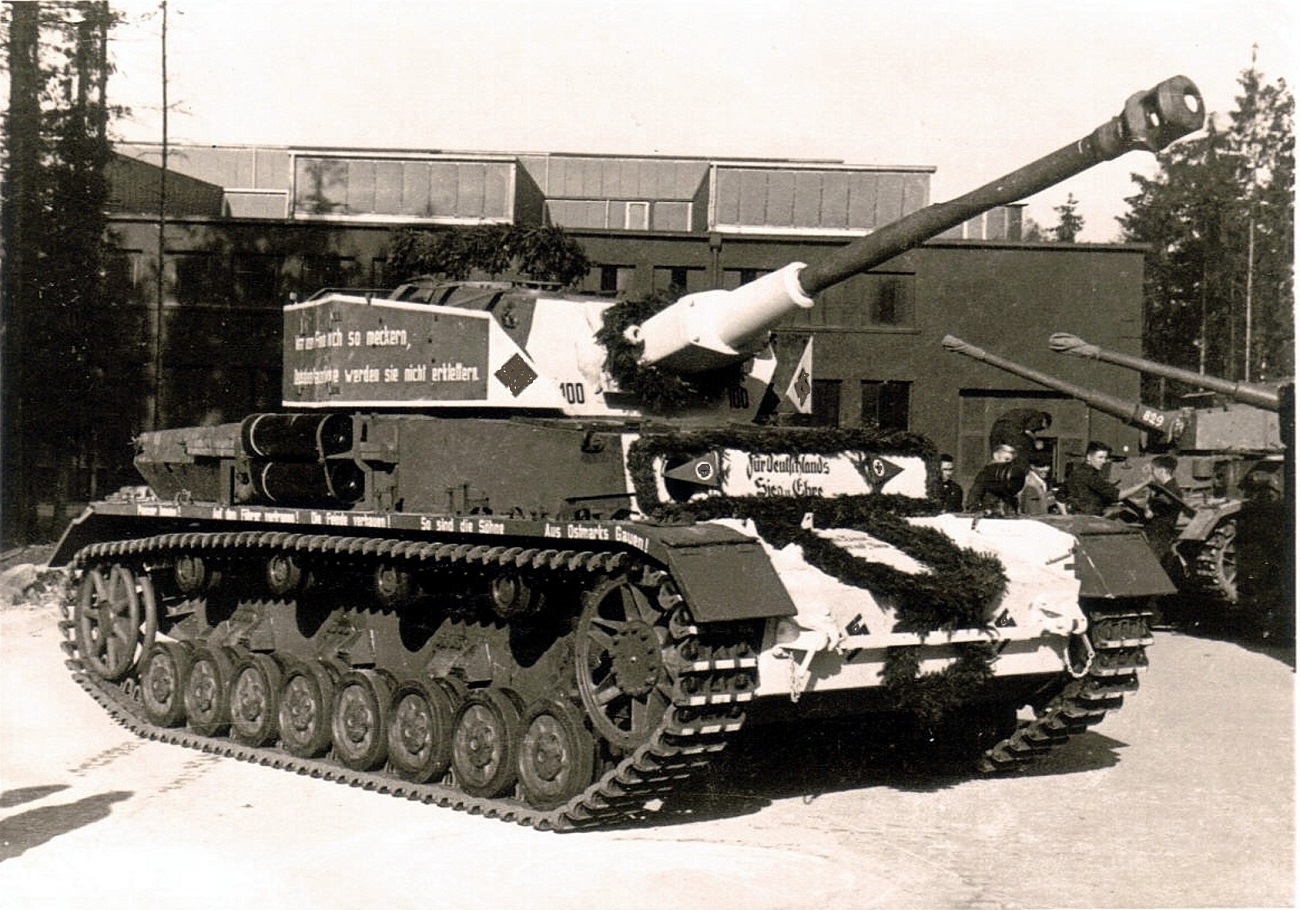 Large-scale production began as early as 1940 - despite the fact that not all buildings were completed, and the official opening of the factory took place only in 1942. Initially, "Nibelungenverke" engaged in the repair and restoration of medium tanks Pz.Kpfw III. Production of tanks began only in the autumn of 1941 and continued until the spring of 1944. The plant was engaged not only in production, but also in the development of machines. For these purposes, the test site has been expanded. 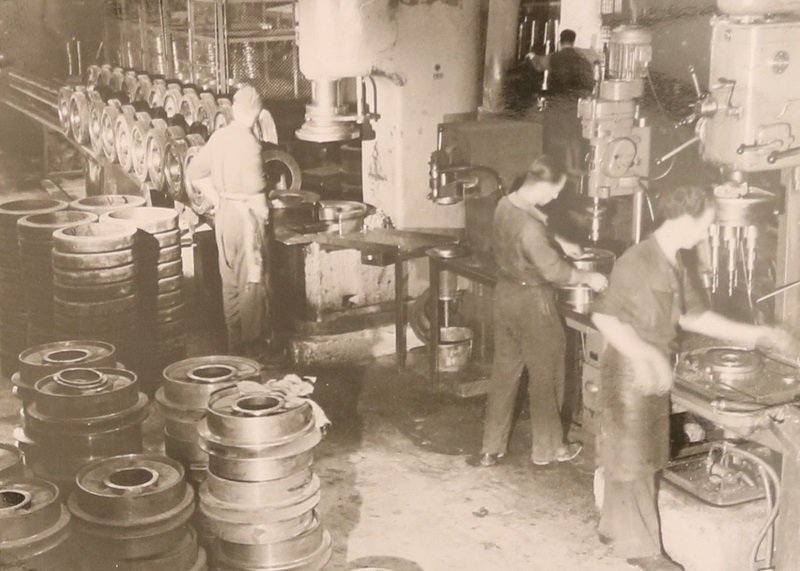 Factory workers at the site for the production of undercarriage components

The most massive tank, produced in St. Valentine was Pz.Kpfw IV. In the winter of 1941, the first Quartet was released, and until the summer of 1942, only 15 cars were created. But over time, the scale of production increased, and in 1944 a “record” was set - 2,809 tanks. In March 1942, the first chassis of an experienced "Tiger" designed by Ferdinand Porsche (VK 45.01 P) was built in St. Valentine. Despite the fact that the Ministry of Weapons has not yet made a decision on a new heavy tank, Hitler's favorite was sure that he would choose his tank. The latter, by the way, after the visit of the plant was inspired by the novelty, and ordered the production of 200 Porsche Tigers monthly. VK 45.01 (P) was to be the first "Tiger". Confident in the success of F. Porche began production until the final decision on the future tank. By the start of production of Pz.Kpfw VI Tiger from Henchel 90 VK 45.01 (P) chassis were assembled. 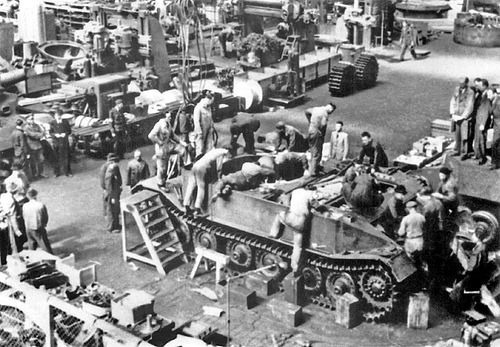 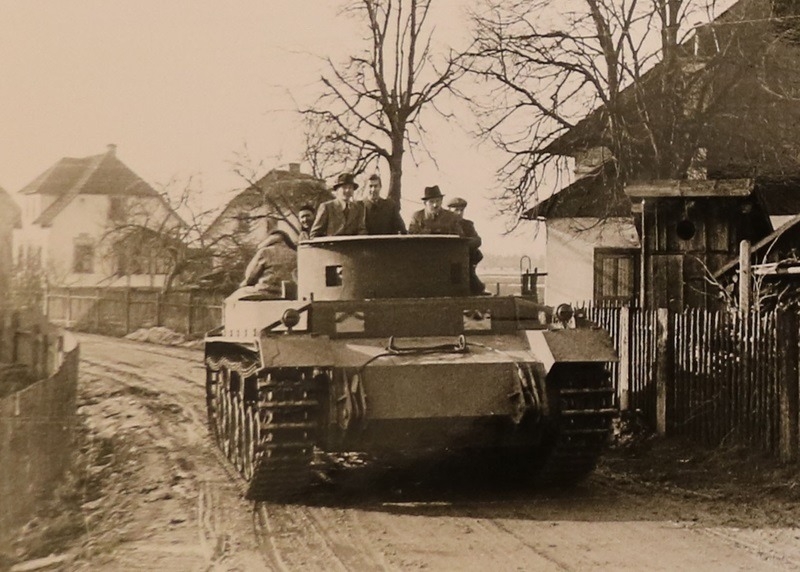 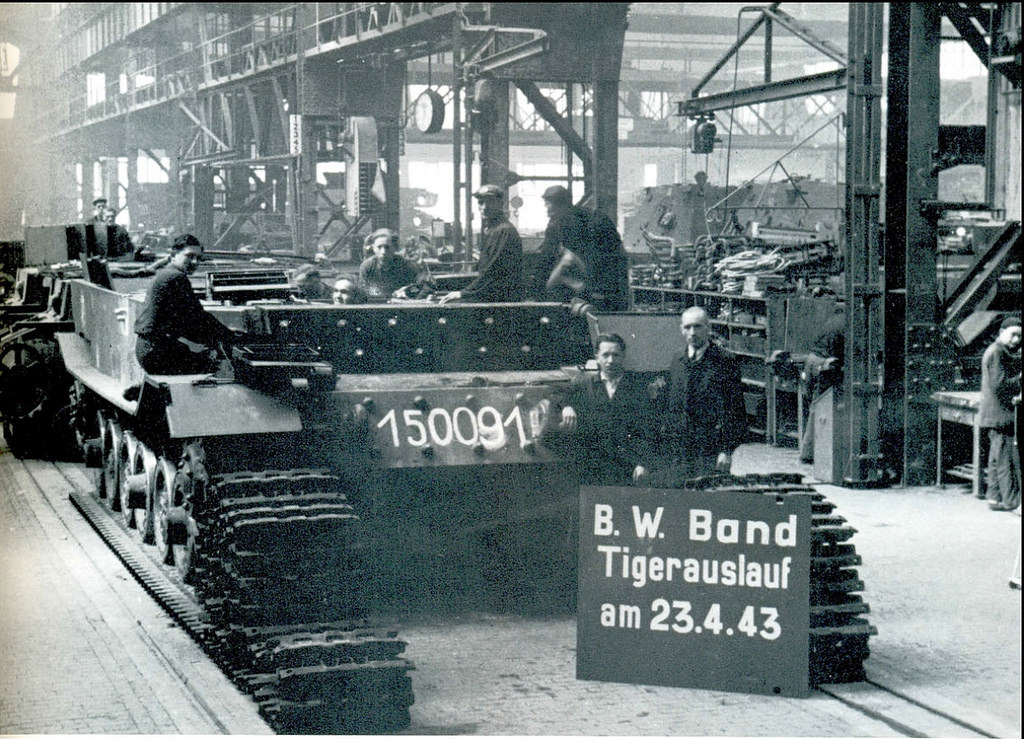 Factory workers posing against the backdrop of the latest chassis VK 45.01 (P)

But the subsequent tests of the tank were disappointing. At the factory site, the new tank demonstrated driving performance, even inferior to the “old man” Pz.Kpfw IV! For this reason, they refused tanks - but you know, not to melt 90 already assembled buildings! In the winter of 1942, in collaboration with the firm Alkett, the design of the Ferdinand tank destroyer began on the chassis of the failed Tigers. By February of the following year, 15 self-propelled guns were delivered, and the next month they wanted to increase the issue to 35 cars per month. 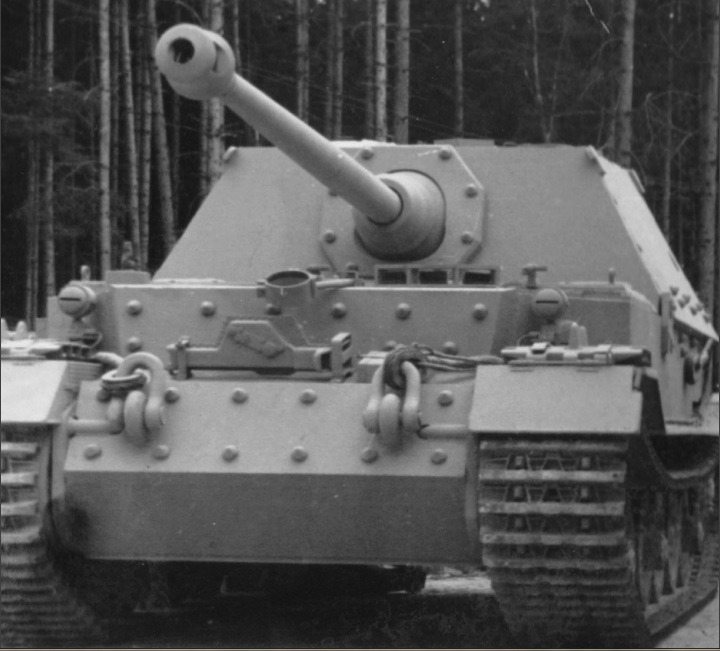 One of the first self-propelled guns on the chassis of the failed Tiger was 8.8 cm StuK 43 Sfl L / 71 Panzerjäger Tiger (P). Or simply - Ferdinand 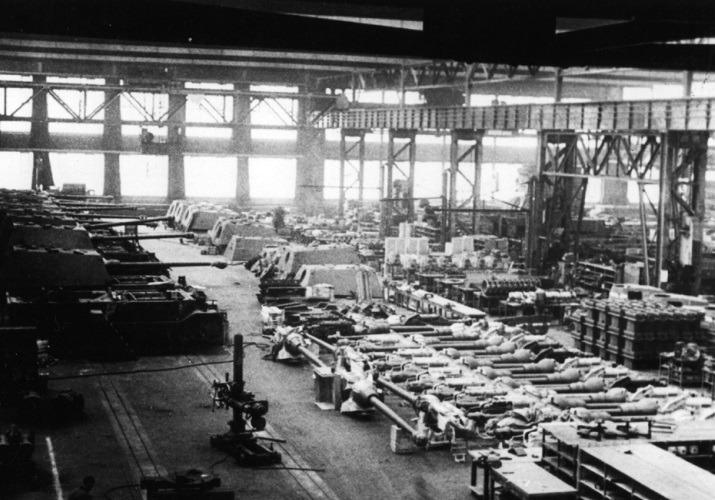 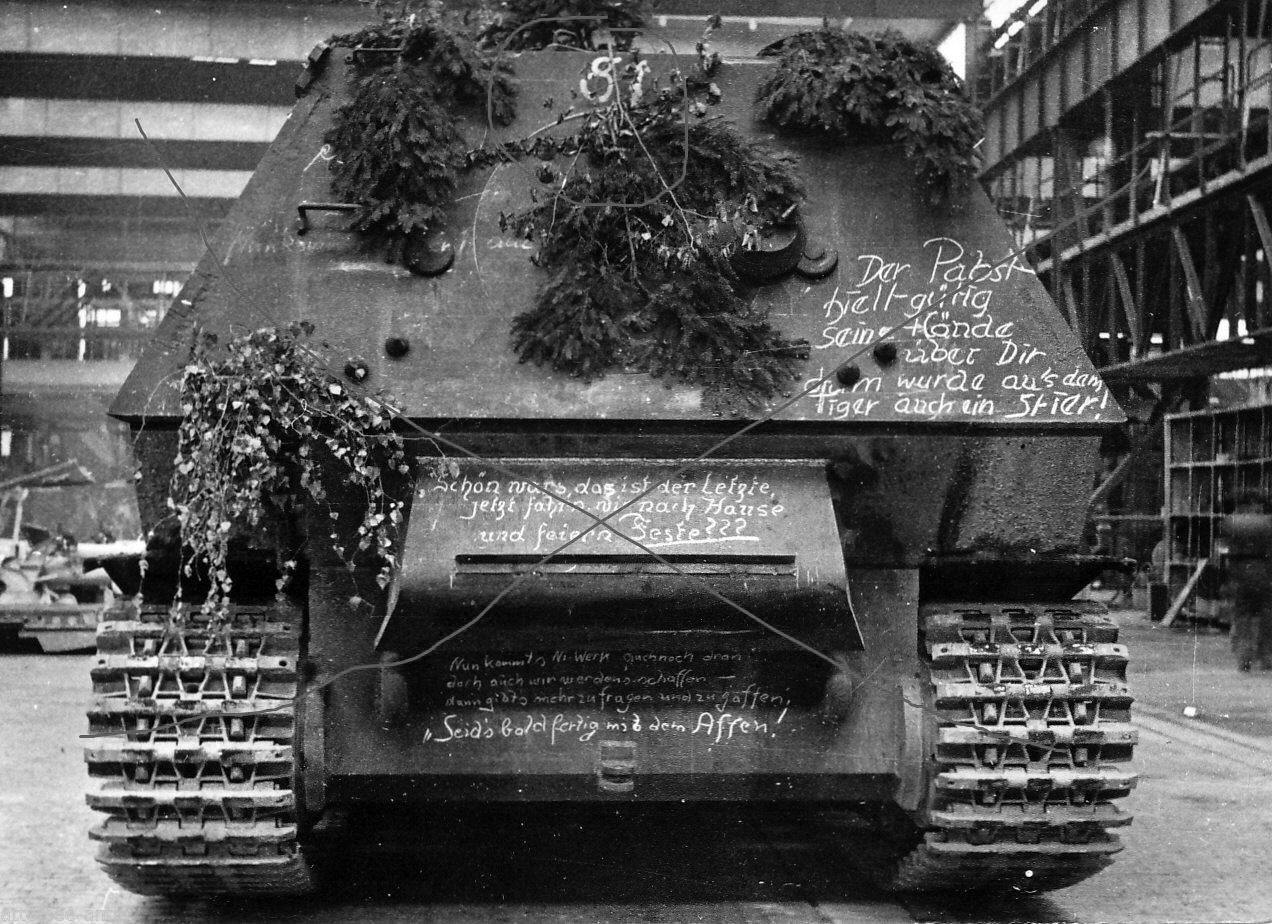 But the reality was different. Already in March 1943, production was complicated. The problem was in the engines. Initially, the VK 45.01 (P) was equipped with a Porsche motor construction, but their mass production was not adjusted, which required reworking the future Ferdinands under the Maybach engines - with a laborious reconstruction of the cooling system. For this reason, at the beginning of spring, only 20 SPGs were released. 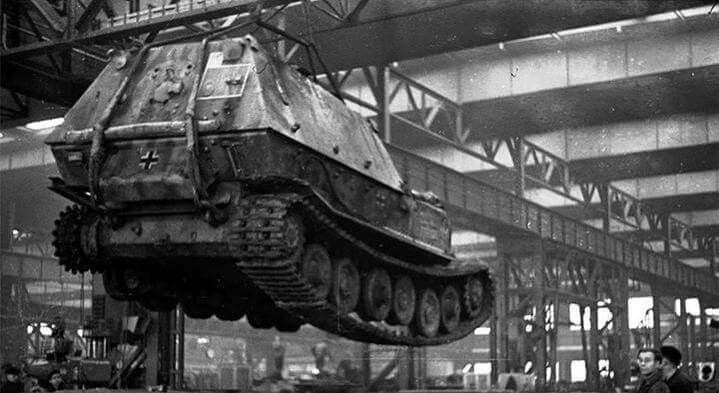 1944 Ferdinand arrived at the factory for repair and modernization

The delay was caused by excitement in the highest circles, and during the month the Minister of Armaments Albert Speer and Colonel-General Heinz Guderian visited the Nibelungenwerk. The plant, favored by the highest officials, received more resources and skilled workers, which made it possible to increase the scale of production. So, until the summer of 1943, the last chassis VK 45.01 (P) was turned into a Ferdinand. 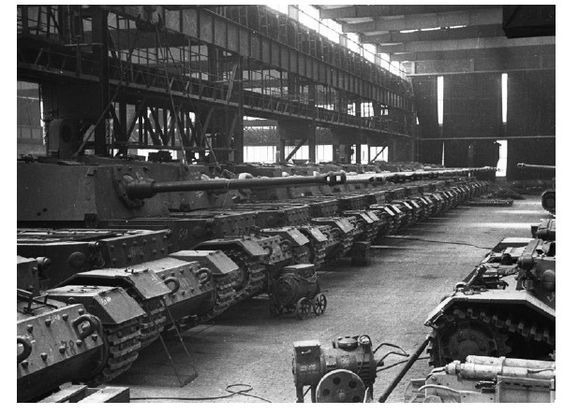 Ready-made tank destroyers before being sent to the front. Until June 1943, 91 Ferdinand \ Elephant was assembled.

In the third quarter of 1944, debugging of mass production of the most severe self-propelled guns in history began - Jagdtiger. Its release was planned earlier, but problems with the reliability of the engine and transmission (which have not been fully resolved) caused a delay. Along with “Ferdinand”, which by then was renamed Elephant, “Jagdtiger” became the second project of a heavy machine on the “Nibelungenwerk”. In the third quarter of 1944, 12 Jagdtigrovs were created, and the largest monthly issue was 20 SAUs - in December of the same year.

The layout of the future "Jagdtigra", autumn 1943 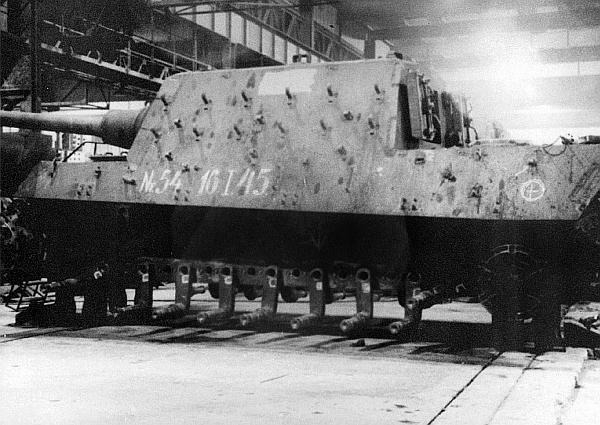 Chassis number "54", January 1945. Until the end of the war, they managed to create 79 chassis in varying degrees of readiness.

However, manufacturing difficulties began even before the production of the Jagdtiger began. The shortage of fuel became critical, in connection with which all cargo transport was withdrawn from the Nibelungwerk. Later they added the Allied bombing. Initially, they did not reach the factory in St. Valentine, but the loss of related industries led to a lack of bearings and transmission parts. Contrary to this, in the summer of 1944, production volumes exceeded the planned, and 287 Pz.Kpfw IV tanks emerged from the Nibelungenwerk gate. 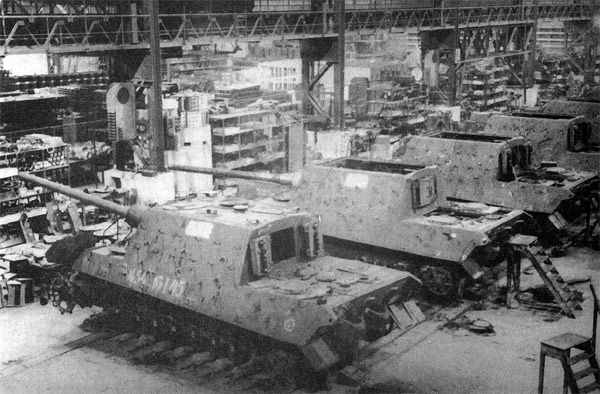 The production of machines was complicated by the lack of components and the Allied bombing.

In October 1944, the bombardment also affected the “Ferdinand forge” - most of the workshops were destroyed, but production continued in the surviving buildings and mobile workshops. Over the last quarter, we managed to release 339 “fours” and 48 “Yagdtigers”. And until the spring of 1945, another 506 Pz.Kpfw IV and 26 Jagdtigrovs were created. 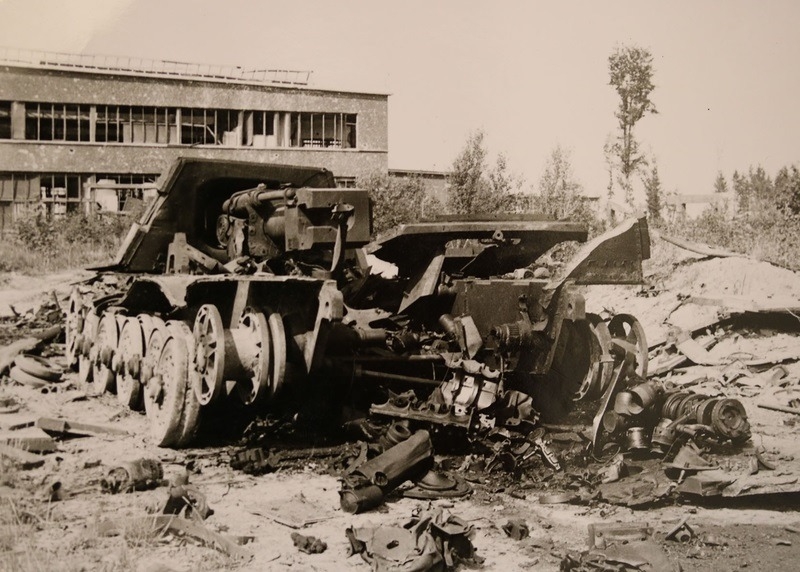 Destroyed Jagdtiger in the vicinity of St. Valentine, 1945

Whoever makes the sword will fall from it

In March 1945, the plant significantly reduced production, switching to the repair of tanks of the army group "Ostmark". In parallel, it was created only three self-propelled guns and a certain amount of chassis in different degrees of readiness. And on April 8, 1945, units of the Red Army entered the territory of Nibelungenwerk. 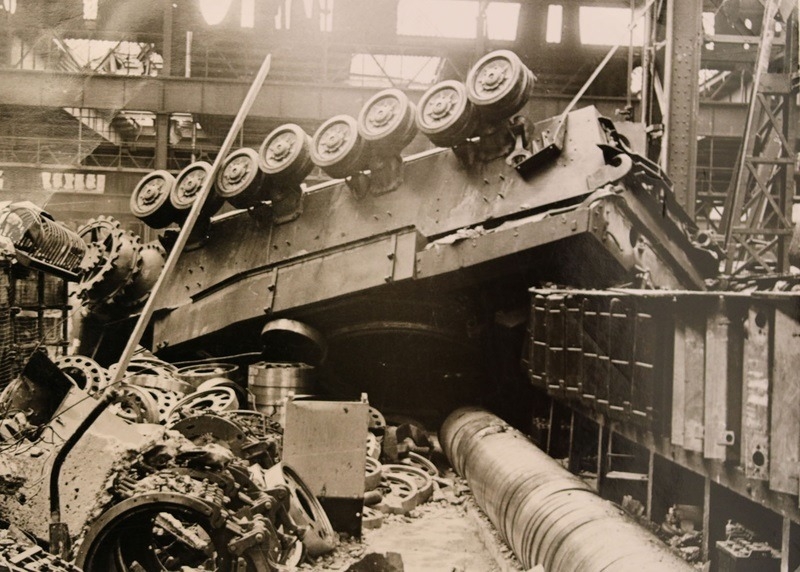 The body of the tank Pz.Kpfw IV in the ruins of "Nibelungenwerke"

You can argue about the ethical component for a long time: that the one who uses the tool or the one who created it is more to blame? And what about servitude? Already in 1940, in the reports of the gendarmes there were references to the refusal of work and unauthorized escapes from the territory of the plant. The main reasons for discontent are lack of nutrition and processing. 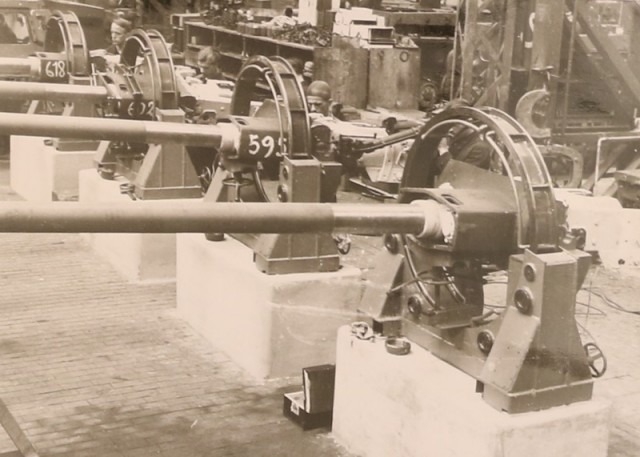 Moreover, prisoners were involved in especially hard work. And in 1944, prisoners from the Mauthausen camp were brought in for work, the lion's share of which were citizens of the USSR. Today, the former "Nibelungenverke" is owned by Magna, and is engaged in the assembly of cabins for agricultural machinery. Testing of tractors, which is remarkable, occurs where the deadly Jagdtigry and Ferdinand once experienced. 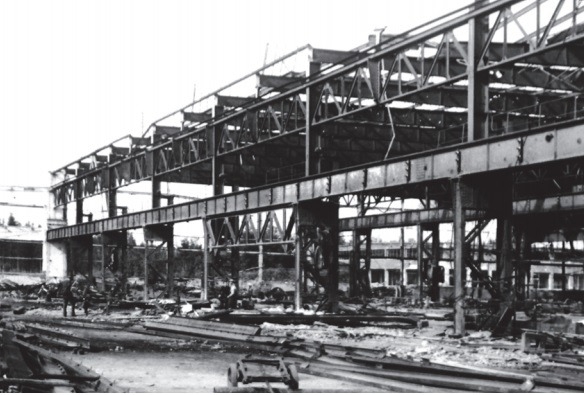