Steel helmets are an integral part of modern wars, it’s hard to imagine a Second World War soldier without this part of a battle suit. In this article we will talk about general WW2 helmets - German, French, Soviet, Romanian, English, American, Hingarian and Japanese ones. We will tell you about their characteristics and functional patterns, also we’ll answer the main question: what model is considered the best one at WW2?

German steel helmet M-35 accepted for service in 1935, was considered to be the best sample of military protective clothing of that time by the end of the Second World War. M-35 prototype became a model M-16 sample of 1916, which was used in the first world war. M-35 became lighter, the sizes of its peak and cone neck-flap, covering ears from a soundwave and fragments, changed. 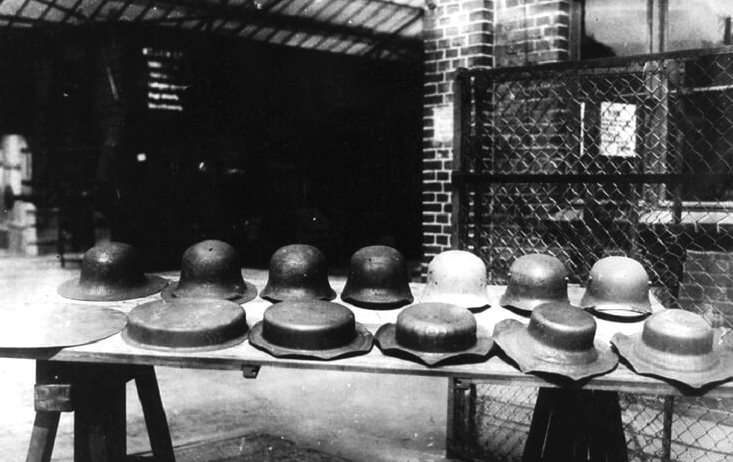 The first M35 were made of alloy carbon steel with addition of molly and took pressure up to 220 kilos per mm². However despite of this figure a helmet could only save from fragment wounds. As for a bullet wound even from a small caliber gun it could hardly give any chances to its owner. Also as for the disadvantages of a helmet, it was a relative complexity in production and, as a result, high cost.
In general, the design of Stahlhelm was successful - it completely covered the back of a head and a forehead from fragments and partially covered ears and a neck. This design was much more successful than a British model MK2, for example.

In 1940 German helmets became simpler. Instead of a molly they used a manganese silicate, air holes were now made with pressing- not with separate units, as it was before. Such helmets got a marking- Stahlhelm M-40. In 1942 the Germans had to refuse from alloying steel and manganese when making helmets, as they needed strategical materials for tank-building. Steel on new model became softer, beading helmet edges was now changed with simple edge raising. Such models got a marking - Stahlhelm M-42.

The main helmet of a British army at the World War was a model Mk II accepted for service in 1939. This model was a modernization of a Brodie helmet which was used at the First World War.

A British Mk2 was made for making a trench-digging war. To a greater extent, thanks to its this helmet provided protection of a soldier who was in a trench during artillery fire or air attack. However, taking into consideration current situation, a so called trench tactics wasn’t widespread; soldiers were in constant motion. In battle condition the MkII provided insufficient protection of the back of the head, ears and neck. In this regard, there were attempts to substitute or upgrade this helmet to a MKIII model, for example. However they weren’t widespread in a British army up to the end of the war. Not many divisions got this helmet when the allies landed in Normandy. The Mk II still remained widespread at the battlefield of the WW2.

The main Soviet helmet in WW2 was a SSh-40, which was accepted to service in 1940. During the war years this model was produced by a metallurgic factory “Red October” in Stalingrad and by a Lysva Metallurgic Plant. However, after the destruction of the “Red October” factory during the Stalingrad battle, the construction of the helmets and other military goods ceased, of course. The case of a helmet was made of 1,2 mm thich alloy armored steel. Weight of a steel part of the biggest size was 800 g.

During helmet testing a Soviet marshal Semyon Budenny sot in it from a Nagant M1895 revolver from a distance of 20 and 10 meters, also he tried to damage it with a sword, but the helmet didn’t get any serious injuries and was successfully accepted for service.

Even though a Soviet SSh-40 was the main one in the Red Army, from my own experience I can say that when digging near Stalingrad on Soviet positions our team StalingradFront.com found helmets of earlier modifications - SSh-36 and SSh-39.

While designing a Hungarian helmet M37 a German M-35 was used as an example, but there were some changes made.

The back of a helmet base was wider than a German one’s. Besides, in the back of a front side on it there was a horizontal brace fixed. A brace was used for fixing a helmet to ammunition in marching. Both a liner bracing and the liner itself differed. Besides, a Hungarian model of 1937 (M-37) was made from steel of rather poor quality. Weight of M37 was about 1170 g, and the thickness of steel was 1,9 mm.

Romania, unlike other countries didn’t set up the production of steel paints, it purchased them in the Netherlands. A Dutch steel helmet M34 (Helm Model 1934) was used as a sample. Dutch symbols were remooved from these helmets, and national ones with a monogram of the king Carol II (two monograms crownded with a “C” character) were used instead. After his demise in 1940 this symbol had to be removed, but in a real sense it didn’t happen often. The evidence of this is the fact that while digging on the battle positions of Romanian division at Stalingrad (for example, in the Kletskaya farm) almost all M-34 had a Carol II monogram.

The main French helmet used both in the World War I and World War II was designed by the General of the Army August-Louis Adrian. Perhaps, this was the most popular helmet in the first half of the 20th century. The Adrian helmet was accepted for service in France, Poland, the USSR, Japan, Mexico, Peru, Luxemburg and other countries.

This modification had four parts: hemispheric arch, front and back peaks (both with sharp framed edges) and a comb, covering an air hole and enhancing protective properties of the helmet. An Adrian helmet was made of a steel 0,7 mm thick sheet with a total weight of 700-800 g.

In 1926 an it was modified and gor a marking M26. Its form became more rounded compared to the model of 1915, the manufacturing technology became easier. Besides, a French helmet M26 became to be made of more tenacious alloy and manganese.

In 1937 front symbols were changed. Old contour symbols of the 1915 model were replaced by the new ones, which represented a round with an embossment with RF monograms. Such modification of an Adrian helmet had a marking M37.

The Imperical Japanese Army used the 1st modification of a helmet of own production throughout the whole war, it was an M30 helmet (narking “Type 90”). This model was made of steel alloy, chrome and molly and had an ovel form, expanding a little to the bottom. There were two air holes on the left and right sides of the top of the helmet. Liner was made of leather and consisted of three double tongues stiked to a leather band.

On the front part of M30 there was a symbol – for the Army it was a five-point star, for the Navy and the marines it was an anchor (often simply drawn with a yellow paint on the helmet), and an  anchor with a sakura flower for the Coast Guard.

Japan produced a large number of such paints, but despite this fact they are hard to find nowadays, mostly because a lot of M30 were lost at the battles of the WW2. The remaining part of the helmets was simply drowned in the sea by allies, and another part was sent for melting.

The M1 was accepted for service in the USA in 1941 and served for American soldiers not only throughout the whole World War 2, but was also used up to 1985. The helmet was made of steel with high content of 1,2 thick manganese. The weight of the M1 of the Second World War was 1290 g. For the period from 1941 to 1945 22 363 015 M1 models were produced in the USA. There were also other varieties - USAAF Mk3 flak helmet, parachute M2 and M1C and also T-14 photographer helmet. A special feature of the last one was a lifting forehead part, which let bring equipment close to the face without removing the helmet.

Summing up the results of combat helmets of the World War 2, we can conclude that despite of high cost and complexity in the production, a German Stahlhelm M35 is the best designed and the most reliable helmet of the WW2. Perhaps, this is one of the reasons why these helmets are the most popular ones among collectors of the WW2 relics all over the world. By the way, you cand find the biggest collection of German Stahlhelm in the world for sale on our site. Simply click the link - Hats and Helmets of World War 2.