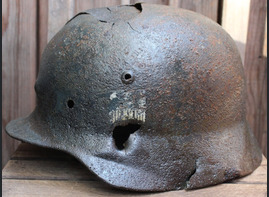 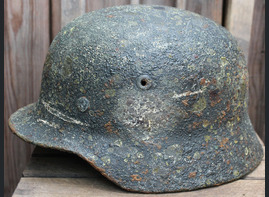 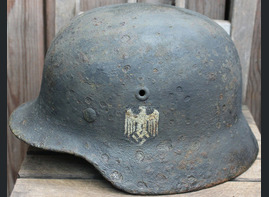 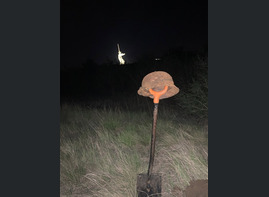 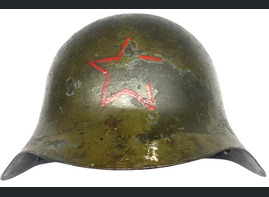 Soviet helmet SSh36, 1938 was found in Leningrad in an old house in the attic. The helmet has two colors and a star. A great example of the SSH36 combat helmet. 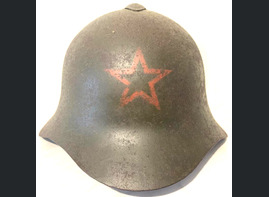 The helmet was found in Murmansk in 2018. A great example of an SSH36 helmet with an early star. From personal collection 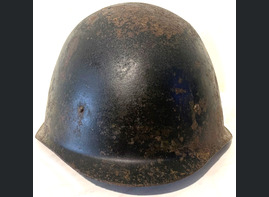 The helmet was found in Stalingrad, in the place of Vertyachy. The helmet belonged to the sailor, as it was painted black. Near Stalingrad, about 100,000 sailors fought. To the 70th anniversary of the Battle of Stalingrad In the summer of 1942, an alarming situation developed in the Stalingrad direction. The enemy rushed to the Caucasus and the Volga to cut the water artery supplying the front with Baku oil. Sailors were sent to help the ground forces. In the battles near Stalingrad, the 92nd rifle brigade of the 62nd army distinguished itself, in which about two thousand sailors of the White Sea naval base fought. In the same army in the 284th Infantry Division there were 2,200 sailors. In the 86th Guards Division - 3,764 sailors. In total, about 100 thousand sailors fought near Stalingrad. Many of them took part in the defeat of the Germans near Moscow and had combat experience. An indomitable offensive impulse, insolence, swiftness, selfless courage in battle - this is the spirit of the Marine Corps. They were recognized by their merry disposition, contempt for death, fierce hatred of the enemy and readiness for self-sacrifice in the name of the Motherland, in the name of the life of a comrade. The enemy called them the black cloud, the black devils. In the summer, the 154th Marine Rifle Brigade, formed in December 1941, arrived at the Stalingrad direction, it included the 1st Moscow detachment of sailors. She distinguished herself in battles with the Nazis on the Kalinin Front. The marine battalion of this brigade under the command of senior lieutenant (later lieutenant colonel) I.N. Ruban in the bend of the Don for two weeks restrained superior enemy forces. The battalion commander formed three groups of his fighters. One of the groups lured large forces of the enemy, and the other two defeated them. In these battles, the battalion commander showed personal courage and courage, for which he was presented for awarding the Order of Alexander Nevsky, established in February 1942. In November 1942, the Order of Alexander Nevsky No. 1 was awarded to I.N. Ruban in the trenches of Stalingrad. At the same time, two other sailor commanders V.F. Kotov and captain S.P. Tsibulin was also awarded the Order of Alexander Nevsky. In October 1942, sailors of the Pacific Fleet began to arrive in Stalingrad. They, like other sailors, showed an example of courage and courage. So, a sniper foreman of the 1st article of Zaitsev at a meeting of a party asset said: “For us there is no land beyond the Volga!” From November 10 to December 17, 1942 he destroyed 225 enemy soldiers and officers. Armor-piercer Ilya Kaplunov destroyed 9 fascist tanks. He was posthumously awarded the title Hero of the Soviet Union. The sailor Panikaka threw himself at an enemy tank when clothes flared up from a combustible mixture of a broken bullet bottle. The sailors of the Volga flotilla courageously fought for Stalingrad, who in difficult conditions provided the defenders with ammunition, fuel, food and supplies for military units. Hundreds of thousands of evacuated women, children and wounded soldiers sailors crossed the Volga. The courage and courage showed the captain of the postal ship "Joseph Stalin" Ivan Rachkalov, who transported hundreds of tons of military cargo and several thousand people under continuous enemy fire. He died with the ship and was buried in the Heroes Square in Volgograd. The victory of the Soviet troops over the Nazi invaders near Stalingrad is one of the glorious pages in the annals of the Great Patriotic War, in which the sailors entered their bright line. Very rare 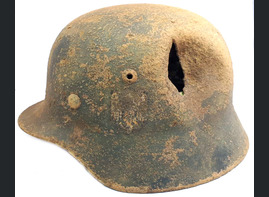 2 German helmets (including this) was found near village Gorkovskiy (Stalingrad region) in a big tent city. Helmet size - 62 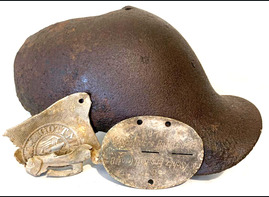 German helmet, dogtag, buckle were found in the same pit. Fragments of the bones were transferred to the memorial cemetery in Rossoshka. It can be seen that the soldier died from a shell hit. Everything was found in Gumrak 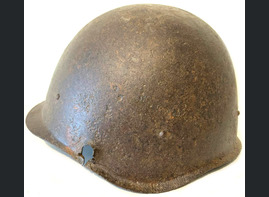 Soviet helmet SSh40 with pass-through bullet hit was found in Stalingrad in a place near the village of Vertyachy, in the autumn battles of 1942 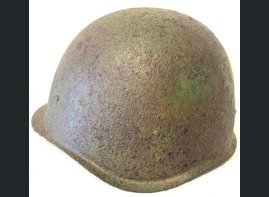 SSh40 helmet was found in Stalingrad in a place near the village of Vertyachy, in the autumn battles of 1942 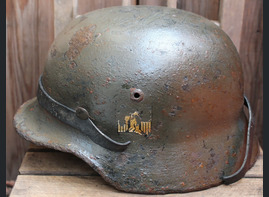 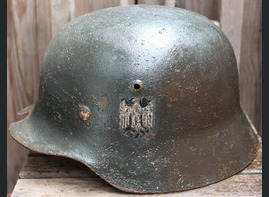 Damaged Wehrmacht helmet M40 with double camouflage repaint, was found in the marshes of Leningrad front in 2020. Size - 64 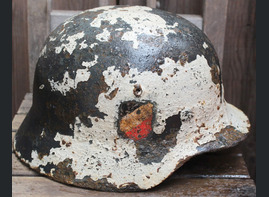 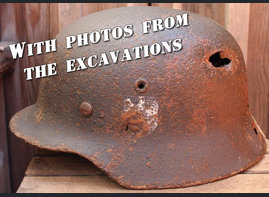 This Wehrmacht helmet M35 and another one was found near village Novoalekseevka, Stalingrad area in april 2020. Size - 66 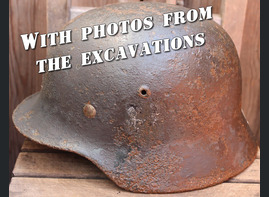 This Wehrmacht helmet M35 and another one was found near village Novoalekseevka, Stalingrad area in april 2020. Size - 64 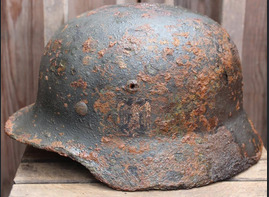 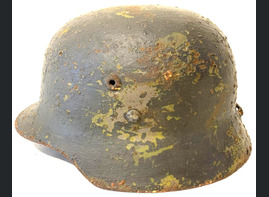 Hungarian helmet M37 was found near Voronezh on Hungarian positions, not far away from village of Arkhangelsk in dugput. M37 helmet has a front-line repaint. 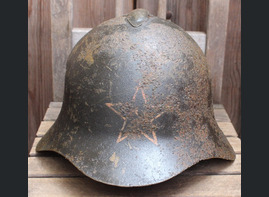 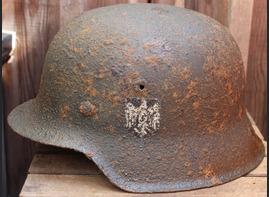 Wehrmacht helmet M42 with eagle decal was found near Smolensk in 2019. Helmet size - 66