What happened to Stalingrad and how does it look today? What sightseeing should you visit? The answer is in this article.

Where did the Stalingrad battle take place?

This grand battle took place at the approaches to a modern city Volgograd. Why was Stalingrad so important to Hitler? Maybe, the thing was the importance of a Stalingrad river - the Volga, maybe, because the city was named in honor of his main rival - Stalin, and maybe because Stalingrad was an industrial city with an abundance of military production plans for the USSR (metal, tanks, artillery cannons, shelling etc.).

What is Stalingrad called now?

Now Stalingrad city is called Volgograd. When and why was it renamed? To answer this question, we should go back even further. Throughout its existence this locality has had 3 names- Tsaritsyn, Stalingrad and Volgograd.

Stalingrad’s previous name was Tsaritsyn, and it was founded in 1589. It was called Tsaritsyn up until 1952, and when in was renamed to Stalingrad, its name could be translated into English as the city of Stalin.

Why was in named in honor of Joseph Stalin? The answer is easy. During the Civil War in Tsar Russia, Stalin took direct leadership in the defense of Tsaritsyn city. Exactly in recognition of his services in this battle in 1925 the city was named after him.

After Stalin’s death in 1953 Nikita Khrushchev, who took over from him, was actively engaged in de-Stalinization. As a result, almost all objects (cities, streets, prospects, townships etc.) named in his honor, were renamed. Since then Stalingrad has had a new name - Volgograd (can be translated into English as the city on the Volga river).

Nowadays Stalingrad is a city where everything reminds of 1942- 43’s events. The most popular place, I think, is the mill of Gergard. This building suffered badly during the war, but it’s remained until now as a monument. It’s interesting that a lot of German helmets available in our store were photographed against this building’s background. 20 meters away from the mill there’s a Stalingrad museum, where everyone can see exhibit items from the Stalingrad battle and study its history in details. There’s also Soviet and German armor installed on the street for tourists, who can touch and even climb it. 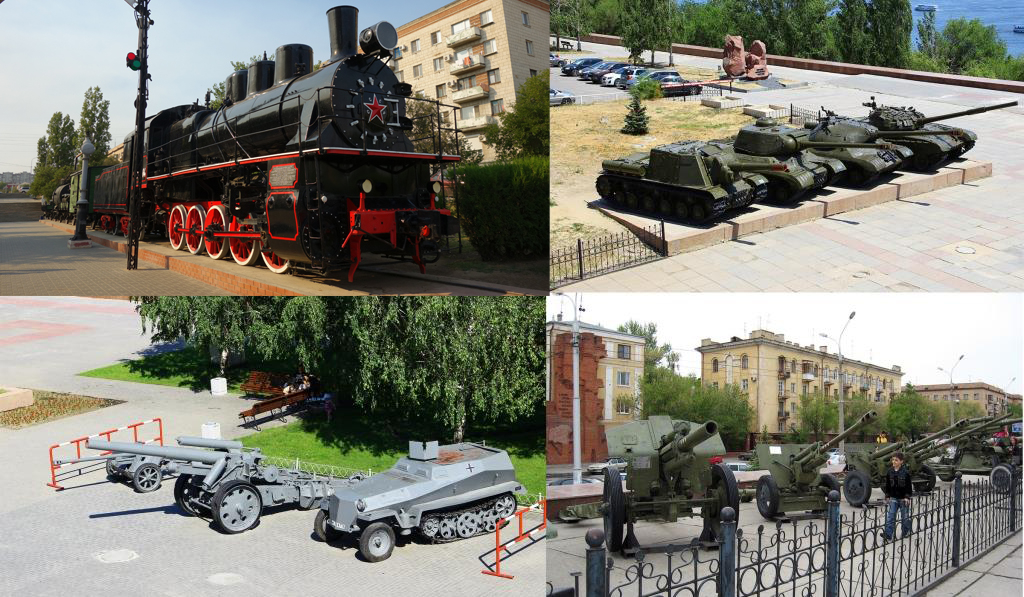 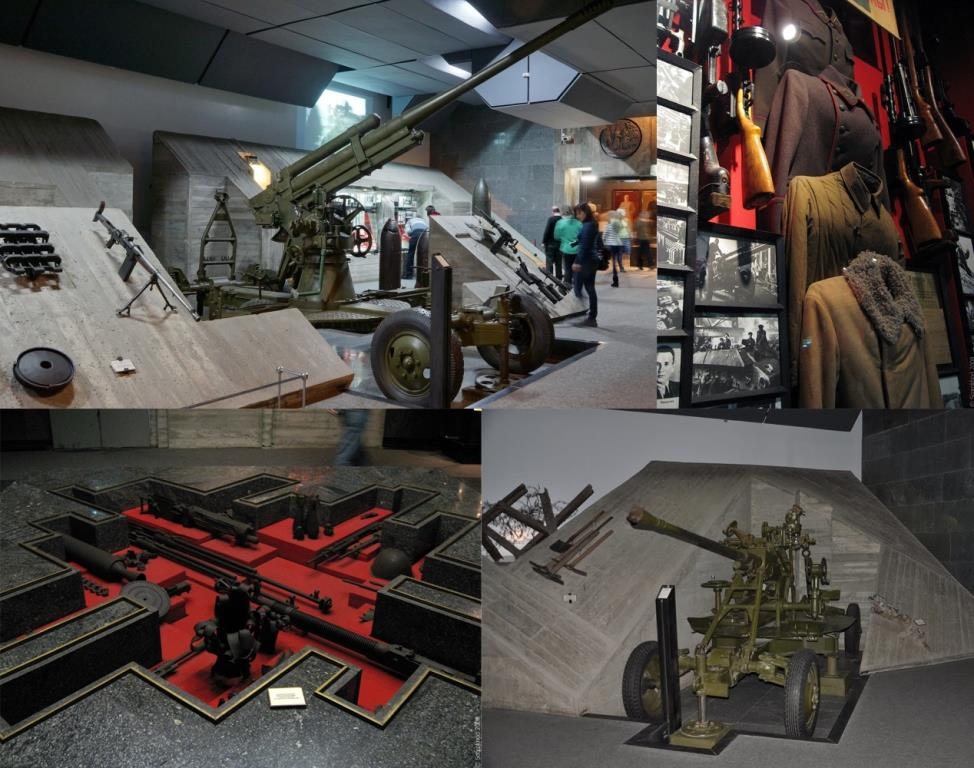 Exhibits in the Stalingrad battle museum

There’s Pavlov House across the street from the mill. It should be reminded that the defense of this house lasted 58 days, which is longer than the whole French company. After the end of the Stalingrad battle this house was renovated and people have been living in it up until now. 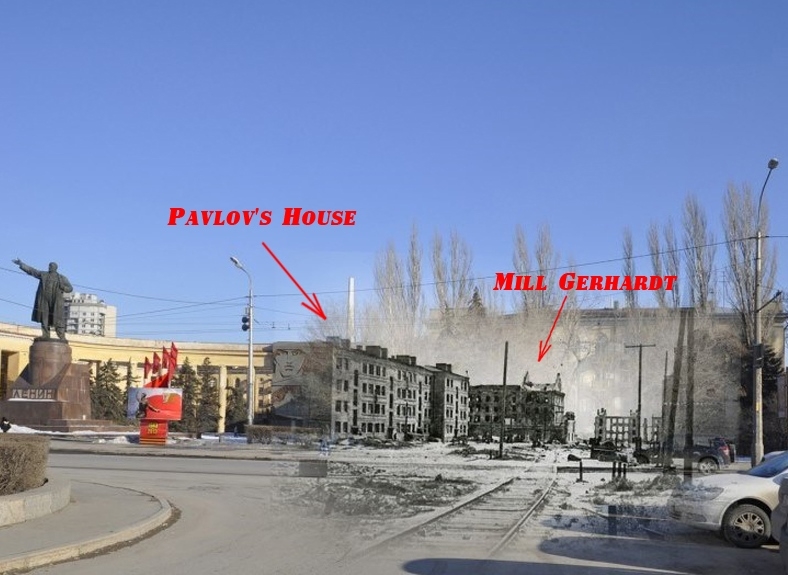 The Mill of Gergard and Pavlov House 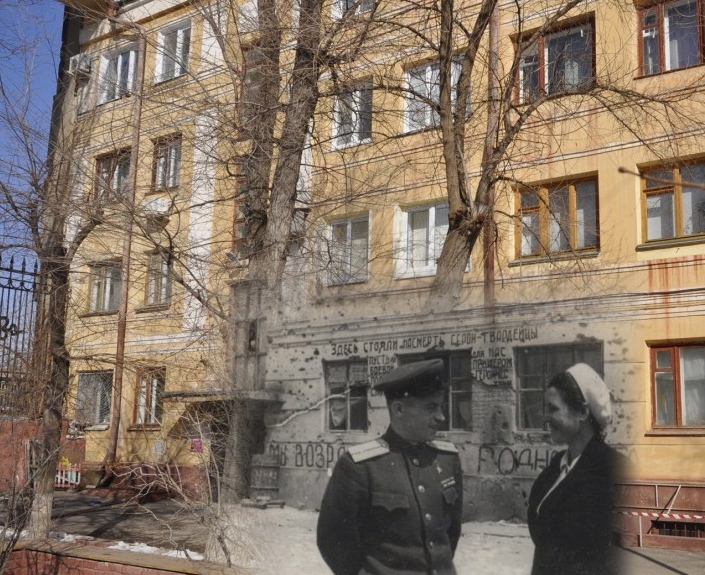 Yakov Pavlov talks against the house named after him, 1946

Also, a part of the Red October plant’s workshop has remained unchanged up to now, where traces of bullets and shells can be found. In 2004 a German tank PzKpfw III gun was found at the territory of the plant, and it’s been an exhibit part since then. 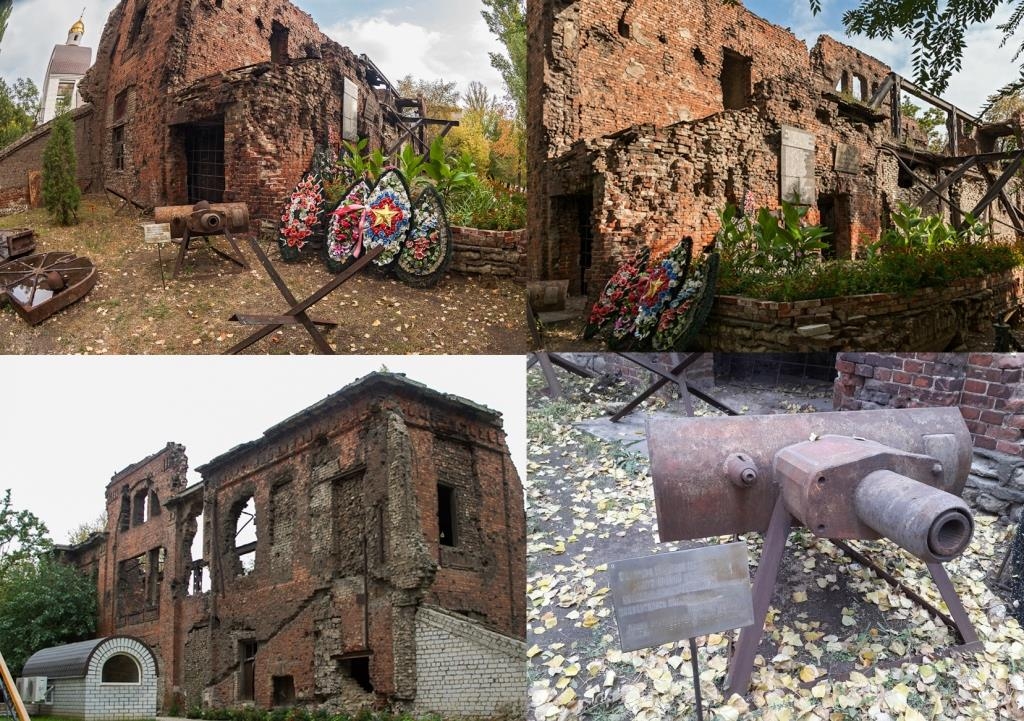 An exhibit at the “Red October” plant territory

If we’re talking about plants, we should mention 3 largest plants in our city. Red October, Barrikady and Tractor plants where fierce battles took place are still working and have original names.

If you remember a blood battle for the Stalingrad tractor plant, a lot has remained unchanged since then:

1. Dzerzhinsky monument near the gate stands at the same place near T-34 tank, though the tank doesn’t fire against German soldiers, but it decorates the square;

German war prisoners at the background of the Dzerzhinsky square

2. One of the Tractor plant workshops has remained at the same place, but now it’s a trade center;

These two pictures were taken by a soldier of the 578th Grenadier Guards of the 14th tank division, Hans Eckle. It shows soldiers of the 9th troop of the III battalion under the command of lieutenant Klaus Voygta, inside the Tractor plant

School №3 is across the street from the Stalingrad tractor plant

There are ruins of one more building between the Volga river and Barrikadny plant. There was a command center of colonel I. I. Ludnikov’s 138th shoot division. Nowadays this place is named Ludnikov Island. It’s called an island because it’s surrounded by the water, and because this little piece of earth was surrounded by the German troops from all around, herewith soldiers of the 138th shoot division fiercely fought and never left their positions.

When the 6th Army was fighting at the Volga river-bank, the Germans thought that they had already captures the city, and that’s when a Stalingrad victory chevron was developed. It depicted an elevator as a symbol of victory over undefeatable Russians. We all know that Germans didn’t use the chevron, but a Stalingrad elevator has remained at the same place until now.

Fighting for a Stalingrad elevator 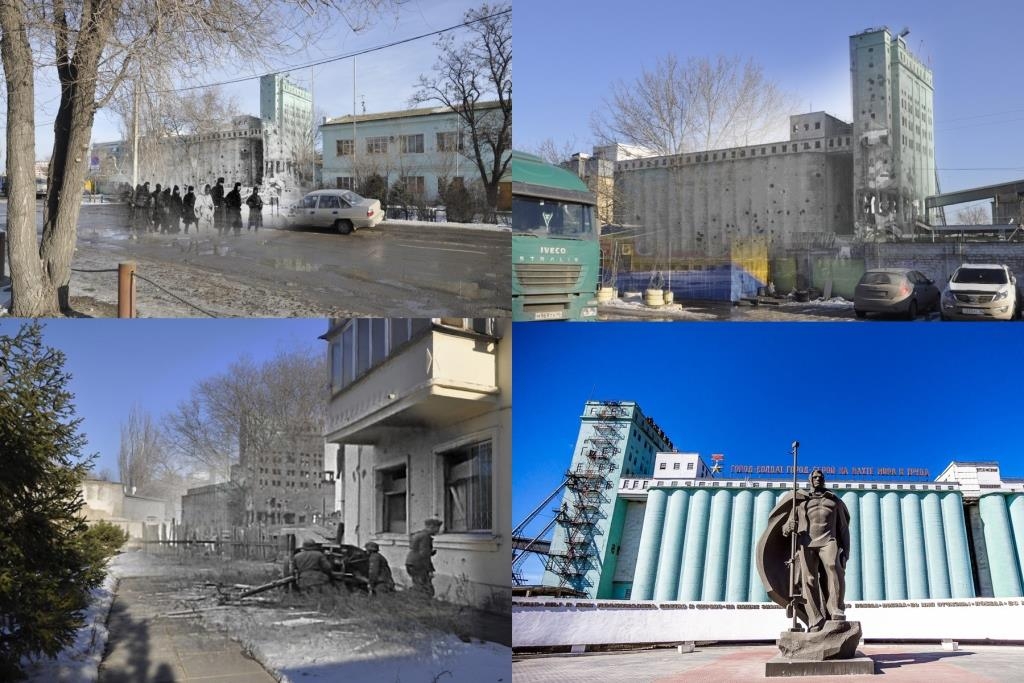 One should also visit Fallen fighters square. There are eternal flame and poplars growing at this place, which are known to have outlived the Stalingrad battle have numerous evidence of warfare on their trunks. Across from the square there’s a Department store building, in the basement of which field Marshal Friedrich Paulus was captured. 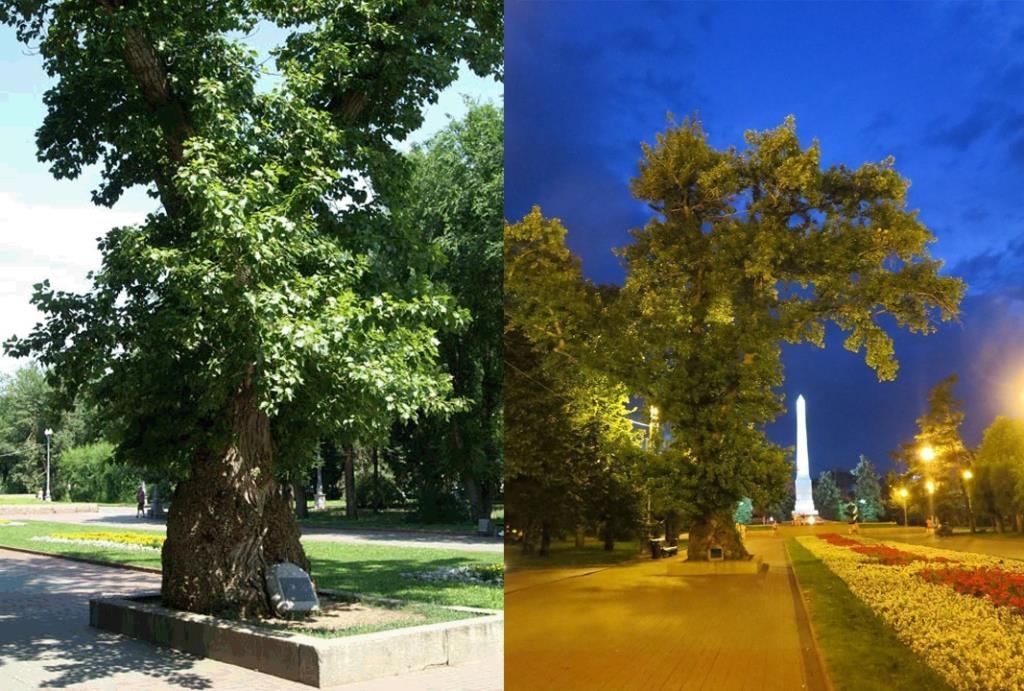 A Department store building suffered several changes, but still the opposite side of Fallen fighters square remained unchanged. In the picture below you can see the 6th Army commander have a meeting with his command. That very basement where Paulus yielded himself prisoner, remained unchanged, now there’s a museum here, and anyone can see working and living conditions of the 6th infantry army of Wehrmacht.

The same place, only after the end of the battles in 1943 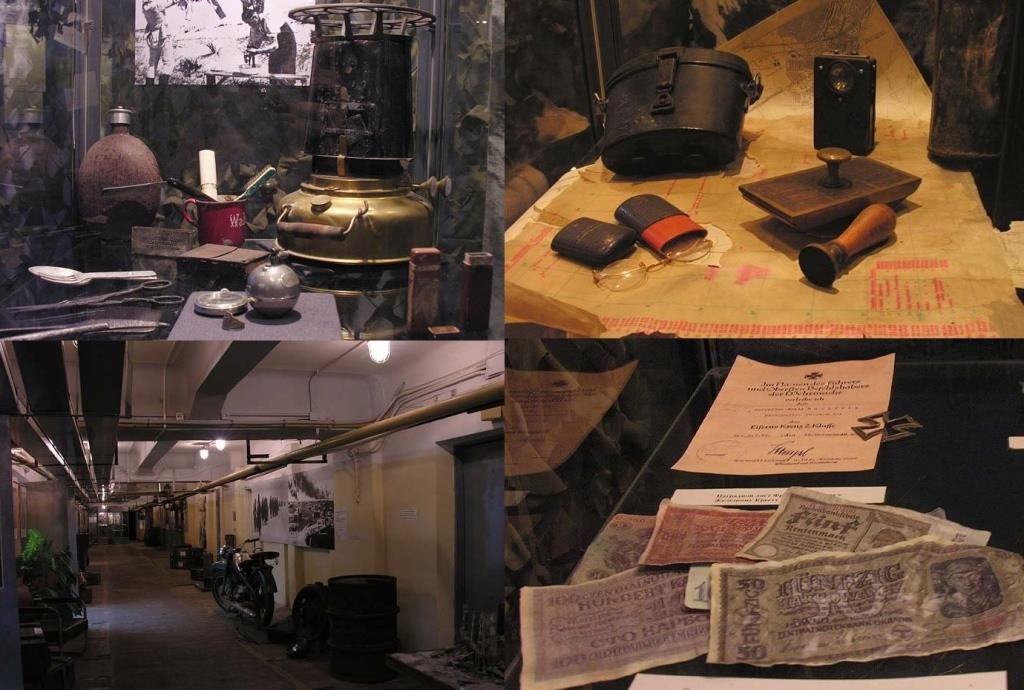 Exhibits in the “Memory” museum in the Department store building 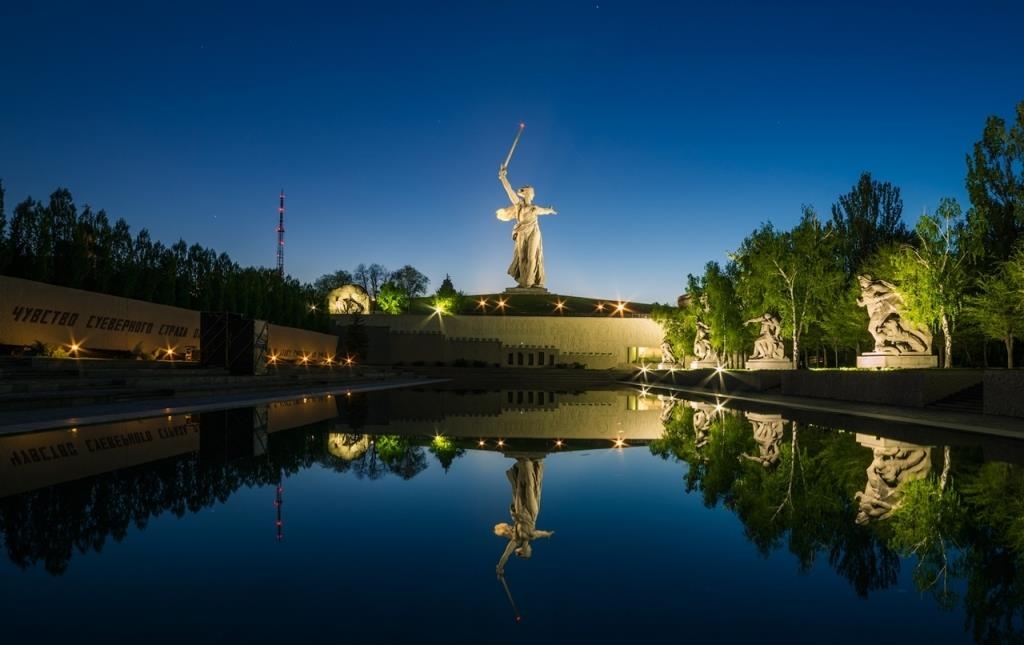 In addition to all the above mention, you can also visit the following memorial places of the World War II in Volgograd - Lysa Hora (folklore), Soldiers’ field, Hungarian war prisoners’ cemetery and many other memorial places. 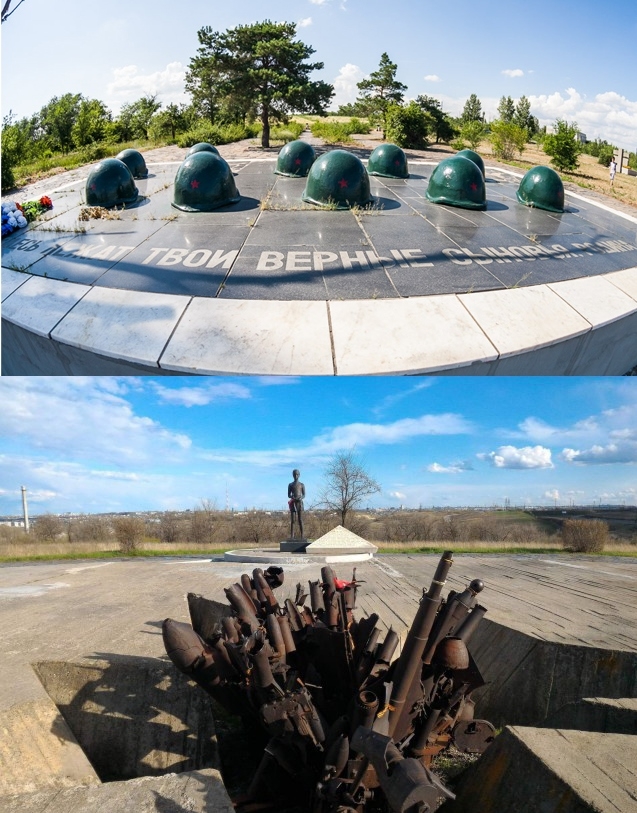 By the way, we can arrange a sightseeing tour in Volgograd for you, if you’re interested in archeology battlefield Stalingrad, you can go for digging in Stalingrad surroundings with us, simply contact us in “Contacts”.